2008 was the year man-made global warming was disproved

Looking back over my columns of the past 12 months, one of their major themes was neatly encapsulated by two recent items from The Daily Telegraph. 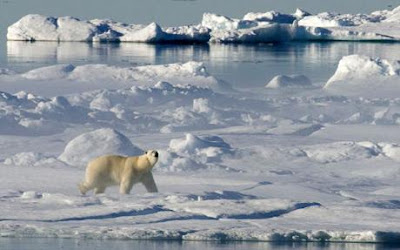 Polar bears will be fine after all. Photo: AP

The first, on May 21, headed "Climate change threat to Alpine ski resorts" , reported that the entire Alpine "winter sports industry" could soon "grind to a halt for lack of snow". The second, on December 19, headed "The Alps have best snow conditions in a generation" , reported that this winter's Alpine snowfalls "look set to beat all records by New Year's Day".

Easily one of the most important stories of 2008 has been all the evidence suggesting that this may be looked back on as the year when there was a turning point in the great worldwide panic over man-made global warming. Just when politicians in Europe and America have been adopting the most costly and damaging measures politicians have ever proposed, to combat this supposed menace, the tide has turned in three significant respects.

First, all over the world, temperatures have been dropping in a way wholly unpredicted by all those computer models which have been used as the main drivers of the scare. Last winter, as temperatures plummeted, many parts of the world had snowfalls on a scale not seen for decades. This winter, with the whole of Canada and half the US under snow, looks likely to be even worse. After several years flatlining, global temperatures have dropped sharply enough to cancel out much of their net rise in the 20th century.

Ever shriller and more frantic has become the insistence of the warmists, cheered on by their army of media groupies such as the BBC, that the last 10 years have been the "hottest in history" and that the North Pole would soon be ice-free – as the poles remain defiantly icebound and those polar bears fail to drown. All those hysterical predictions that we are seeing more droughts and hurricanes than ever before have infuriatingly failed to materialise.

Even the more cautious scientific acolytes of the official orthodoxy now admit that, thanks to "natural factors" such as ocean currents, temperatures have failed to rise as predicted (although they plaintively assure us that this cooling effect is merely "masking the underlying warming trend", and that the temperature rise will resume worse than ever by the middle of the next decade).

Secondly, 2008 was the year when any pretence that there was a "scientific consensus" in favour of man-made global warming collapsed. At long last, as in the Manhattan Declaration last March, hundreds of proper scientists, including many of the world's most eminent climate experts, have been rallying to pour scorn on that "consensus" which was only a politically engineered artefact, based on ever more blatantly manipulated data and computer models programmed to produce no more than convenient fictions.

Thirdly, as banks collapsed and the global economy plunged into its worst recession for decades, harsh reality at last began to break in on those self-deluding dreams which have for so long possessed almost every politician in the western world. As we saw in this month's Poznan conference, when 10,000 politicians, officials and "environmentalists" gathered to plan next year's "son of Kyoto" treaty in Copenhagen, panicking politicians are waking up to the fact that the world can no longer afford all those quixotic schemes for "combating climate change" with which they were so happy to indulge themselves in more comfortable times.

Suddenly it has become rather less appealing that we should divert trillions of dollars, pounds and euros into the fantasy that we could reduce emissions of carbon dioxide by 80 per cent. All those grandiose projects for "emissions trading", "carbon capture", building tens of thousands more useless wind turbines, switching vast areas of farmland from producing food to "biofuels", are being exposed as no more than enormously damaging and futile gestures, costing astronomic sums we no longer possess.

As 2009 dawns, it is time we in Britain faced up to the genuine crisis now fast approaching from the fact that – unless we get on very soon with building enough proper power stations to fill our looming "energy gap" - within a few years our lights will go out and what remains of our economy will judder to a halt. After years of infantile displacement activity, it is high time our politicians – along with those of the EU and President Obama's US – were brought back with a mighty jolt into contact with the real world.

I must end this year by again paying tribute to my readers for the wonderful generosity with which they came to the aid of two causes. First their donations made it possible for the latest "metric martyr", the east London market trader Janet Devers, to fight Hackney council's vindictive decision to prosecute her on 13 criminal charges, ranging from selling in pounds and ounces to selling produce "by the bowl" (to avoid using weights her customers dislike and don't understand). The embarrassment caused by this historic battle has thrown the forced metrication policy of both our governments, in London and Brussels, into total disarray.

Since Hackney backed out of allowing four criminal charges against Janet to go before a jury next month, all that remains is for her to win her appeal in February against eight convictions which now look quite absurd (including those for selling veg by the bowl, as thousands of other London market traders do every day). The final goal, as Neil Herron of the Metric Martyrs Defence Fund insists, must then be a pardon for the late Steve Thoburn and the four other original "martyrs" who were found guilty in 2002 – after a legal battle also made possible by this column's readers – of breaking laws so ridiculous that the EU Commission has even denied they existed (but which are still on the statute book).

Readers were equally generous this year in rushing to the aid of Sue Smith, whose son was killed in a Snatch Land Rover in Iraq in 2005. Their contributions made it possible for her to carry on with the High Court action she has brought against the Ministry of Defence, with the sole aim of calling it to account for needlessly risking soldiers' lives by sending them into battle in hopelessly inappropriate vehicles. Thanks not least to Mrs Smith's determined fight, the Snatch Land Rover scandal, first reported here in 2006, has at last become a national cause celebre.

May I finally thank all those readers who have written to me in 2008 – so many that, as usual, it has not been possible to answer all their messages. But their support and information has been hugely appreciated. May I wish them and all of you a happy (if globally not too warm) New Year.