The Films Are for Him. Got That? 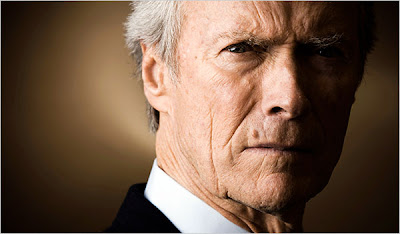 CARMEL, Calif.- Being introduced to Clint Eastwood is something like seeing a California redwood for the first time. The difference is that this redwood, even at the age of 78, reaches out to shake your hand with a firmness that still intimidates no matter how much time you spent preparing your grip (for the record: three days).

He arrived for the interview at the Mission Ranch restaurant here as if he owned the place, and it didn’t make any difference that, in this case, he does. He had his first legal drink in the bar while he was stationed at the nearby Army base in the late 1940s. In 1986 he bought the property and rebuilt it to his taste, with a piano bar, heart-stopping views of the ocean spray on Point Lobos and plenty of meat on the menu. Despite what you might have read on Wikipedia, Mr. Eastwood is not a vegan, and he looked slightly aghast when told exactly what a vegan is. “I never look at the Internet for just that reason,” he said.

It’s been 20 years since Mr. Eastwood was mayor of Carmel, but clearly he’s still the king around here. Unlike the taciturn characters he plays on screen, he’s voluble, chatting and laughing with his staff with a sharpness and enthusiasm that make him seem far younger than his age. After showing me around the property, he insisted I come back that evening for a steak dinner. “We’ve got good chow,” he said. Go on: you tell him you’ve made other plans.

Mr. Eastwood’s on familiar ground in another way. It’s coming up on the Oscars, and he has two films in contention, “Changeling,” with Angelina Jolie, and his newest, “Gran Torino,” which he finished shooting only this summer and which began appearing in theaters on Friday.

In “Gran Torino” Mr. Eastwood plays Walt Kowalski, a Korean War veteran, retired Ford line worker and full-time bigot who stews on his porch in Detroit watching his block being taken over by Hmong immigrants from Southeast Asia. When a gang pressures a teenager living next door (played by Bee Vang) into trying to steal Walt’s vintage Gran Torino, the aging veteran gets pulled reluctantly, then violently, into the lives of his neighbors.

Mr. Eastwood has already won the best actor prize for “Gran Torino” from the National Board of Review, and the Oscar talk — he has never won as an actor — is running high. He claims not to care deeply about awards. When asked whom he makes films for, Mr. Eastwood said, “You’re looking at him.” Calculated or not — those films do have a habit of showing up (sometimes unexpectedly) in prime Oscar campaigning season — that stance seems to charm the voters some 300 miles to the south in Los Angeles, who have rewarded his movies richly in the past 15 years, including two best-picture awards. Mr. Eastwood has become the George Washington of the awards season: if called, he will serve. But he doesn’t seem to believe in term limits.

“Gran Torino” is the 29th full-length movie Mr. Eastwood has directed — more than Scorsese, more even than Spielberg — so perhaps it’s an accident of memory that his name first conjures up the impression of the squinty guy on a horse. Starting in the mid-1980s he began to change some minds by pushing the boundaries of his cowboys-and-cops image with films like “Honkytonk Man” and “Tightrope,” but he said about his reputation, “If that’s how people want to pigeonhole me, that’s fine.”

If anything, his directing pace has picked up in the past five years.

The script for “Gran Torino” had been kicking around Hollywood for a while before Mr. Eastwood read it. The writer, Nick Schenk, who worked in a Ford plant years ago, based the character of Walt on the men he met there, many of them Korean War veterans. “I’d talk a lot to these guys, and they’d tell me stuff they wouldn’t tell their wife and kids,” Mr. Schenk said.

Some directors are known as an actor’s best friend. Mr. Eastwood may be the writer’s. “He didn’t change a word,” Mr. Schenk said. “That never happens.”

Mr. Eastwood said he learned his lesson after making extensive revisions on the script for “Unforgiven,” then calling up the writer, David Peoples, and announcing he was returning to the first draft. “I’m emasculating this thing,” he told Mr. Peoples.

There was one major disappointment for Mr. Schenk: the setting of “Gran Torino” was shifted from Minneapolis to Detroit, the original home of Ford and, not coincidentally, the home of 42 percent tax credits for films made there. (That helped make it easy for Warner Brothers to sign off on bankrolling the movie, something that hasn’t always been a given in the studio’s relationship with the director.)

Mr. Eastwood bought the script in February, then shot the movie over the summer at a guerrilla filmmaker’s pace, finishing in 32 days. The fast clip, Mr. Eastwood said, helped him with the Hmong members of the cast, most of whom had never acted and many of whom didn’t speak English. “I’d give them little pointers along the way, Acting 101,” he said. “And I move along at a rate that doesn’t give them too much of a chance to think.”

It also doesn’t give Mr. Eastwood too much time to worry about Hollywood. After shooting, he returned to Carmel, where he lives with his wife, Dina Ruiz, and manages his investments, including an ownership stake in the Pebble Beach golf course company. He set up a bay and worked with his two film editors in an 1862 farmhouse on the Mission property for a week or so. Between sessions he sat at the piano and picked out a score: he has written music, including full scores, for many of his films. He even sings one of his own melodies over the film’s final credits, his voice burned down to a whisper. (Mr. Eastwood himself refuses to call it singing because that conjures up memories of “Paint Your Wagon,” the misbegotten 1969 musical. “I vowed I’d never do that again,” he said.)

Like “Million Dollar Baby” and “Mystic River” before it, “Gran Torino” is a modern story that feels anachronistic. Walt’s neighborhood is every bit as bounded and knowable as the town of Lago in “High Plains Drifter,” and the confrontations with the Hmong gang members build methodically, as if in a town square. But when the film threatens to descend into a vigilante picture — the last guy who actually thought he could solve Detroit’s problems with his fists was Gordie Howe — “Gran Torino” takes some unexpected turns. 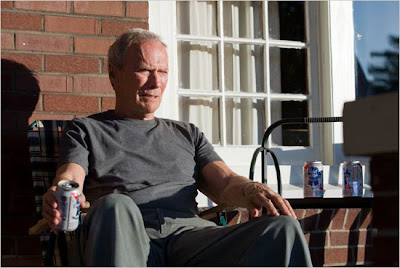 Scene from “Gran Torino,” in which Clint Eastwood plays a character fond of Pabst Blue Ribbon.


Before filming there had been gossip (again, the Internet) that Mr. Eastwood was making another “Dirty Harry” sequel. What “Gran Torino” does share with the “Dirty Harry” movies is the sheer force of its incorrectness. Walt, who stokes his resentment with cigarettes, beef jerky and Pabst Blue Ribbon, expresses his disgust for the Hmong and just about every other racial group in a steady stream of obscenities. Robert Lorenz, Eastwood’s frequent producing partner, said that what he appreciated about Mr. Schenk’s dialogue was that “he didn’t hold back.”

“It was left really raw,” he said. “It sounded like those people you know, or your uncle saying something really bad at a wedding.”

Brian Grazer, a producer of “Changeling,” sees this kind of directness as a strength. “What most interested me about Clint Eastwood as a director is the honesty and intensity he injects into the movies that he directs,” he said. “He is so confident as a director that he will allow the sometimes ugliness of life to live inside the scenes of his movies.”

For Mr. Eastwood the raw language is central to Walt’s story. “If he comes in and just befriends these people and doesn’t have any hurdles — any personal hurdles to overcome — that doesn’t make for a very interesting character,” he said. But Mr. Eastwood, who last spring had a verbal run-in with Spike Lee over the lack of black soldiers in the Eastwood film “Flags of Our Fathers,” also confesses to some sympathy for Walt’s choice of words in a way sure to irk the Hollywood types who have finally embraced him despite his libertarian politics.

“A lot of people are bored of all the political correctness,” he said. “You’re showing a guy from a different generation. Show the way he talks. The country has come a long way in race relations, but the pendulum swings so far back. Everyone wants to be so” — here he paused and narrowed his eyes, like Dirty Harry drawing a bead on a perp — “sensitive.”

What we admire about heroes (and villains) like the ones Mr. Eastwood used to play isn’t their sensitivity, it’s their single-mindedness: they say what they’re going to do, then do it. Whether in Spain or in San Francisco, Mr. Eastwood’s heroes were never given the “kill one to save a thousand” liberal trapdoor of other Hollywood films. The violence of the “Dirty Harry” movies seems almost quaint now, but what Harry says — “Ask yourself one question: Do I feel lucky?” — still has the power to shock.

But if Mr. Eastwood shoulders some blame for every “Rambo” and “Die Hard” that followed, he should be given credit for looking at a more complicated transaction in the films he directs, one where people’s actions are at odds with their beliefs. What helps sell the contradiction in “Gran Torino” is Mr. Eastwood’s own physical presence. More so than any other leading man, he has been willing to play his real age. At 78 he is perhaps thinner than he once was, but in that sinewy way that reveals strength as much as diminishes it. After Walt beats up one gang member — hey, he’s still Clint Eastwood — the next scene shows him out of breath, struggling to open his front door.

To Mr. Eastwood being able to play 78 is just one of the benefits of a long career. “It’s ridiculous when you won’t play your own age,” he said. “You know when you’re young and you see a play in high school, and the guys all have gray in their hair and they’re trying to be old men and they have no idea what that’s like? It’s just that stupid the other way around.”

The other benefit is that, even after a great career in the movies, you can fashion another. “After ‘The Good, the Bad and the Ugly,’ I walk down the street and everybody would whistle out” — here he sang the movie’s famous theme. “Then it became ‘Do I feel lucky?’ and ‘Make my day.’ But it’s progressed along. Whether it’s taken this turn on purpose, I can’t say.”

Walt Kowalski has a catchphrase too in “Gran Torino.” “This is what I do,” he tells the Hmong teenager before the film’s final act. “I finish things.” So does Mr. Eastwood, just not in the way anybody would have expected.

And he may not be done. There were reports — again on the Internet — that this would be his last role, a rumor he helped fuel but now says is not necessarily true.

“Somebody asked what I’d do next, and I said I didn’t know how many roles there are for 78-year-old guys,” he said. “There’s nothing wrong with coming in to play the butler. But unless there’s a hurdle to get over, I’d rather just stay behind the camera.”