A Scrooge for the 21st century has arrived just in time for Christmas, and wouldn't you know he's come back in the form of Dirty Harry? As the spitting, swearing, hate-spewing lead character of "Gran Torino," Clint Eastwood delivers a lacerating and hilarious valedictory of a career as America's most lovable vigilante. Here, he makes the ugly American a thing of almost primitive beauty, as an antihero worthy of Dickens. 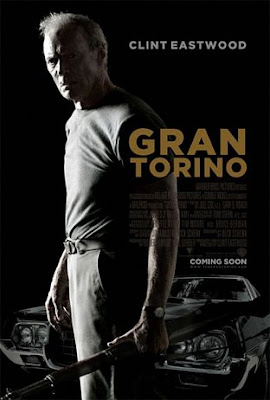 "I finish things," says Walt Kowalski at one point in this often disarmingly funny melodrama. "That's what I do." Grim-faced, his voice reduced to a gravelly growl by boilermakers and cigarettes, Kowalski is a recently widowed holdout in his working-class Detroit neighborhood, one of the few white citizens within a growing community of Hmong immigrants. He despises his new neighbors, calling them "swamp rats," "slopes" and "gooks" (his rhetoric is a holdover from his days in the Korean War), but he doesn't have much use for anyone else either, whether it's the earnest young Catholic priest who continually tries to save his soul or his own grown sons and their vacant, spoiled kids.

Here's what Walt likes to do: sit on his tidy front porch with his yellow lab, knock back a few beers and look at his lovingly restored 1972 Gran Torino, which sits in the driveway as a pristine symbol of happier days, when he worked at the Ford plant, his wife was still alive and white men like him bestrode the world like giants.

Once in a while he casts a snarling glance at the Hmong grandmother taking the air next door, but he keeps his contact with her family to a minimum until her grandson Thao (Bee Vang) tries to steal Walt's beloved car. Walt's happy simply to let the kid off with a heavily armed warning (this is a man who seems to have a gun in every drawer), but when he scares off a gang that's intimidating Thao's family, he becomes their reluctant hero. Gradually, Walt finds himself befriending Thao and his sister Sue (Ahney Her), a cheerful, indefatigably spunky teenager who greets Walt's insults with a good-natured laugh or equally sarcastic riposte.

Much of the joy of "Gran Torino" -- which Eastwood directed from a script by Nick Schenk -- derives from watching Walt's deepening relationship with his newfound friends, whom he persists in giving names like "Yum Yum" and "Toad" even as he develops a surly affection for them. Like Archie Bunker before him, Walt is an equal-opportunity verbal bomb-thrower, as evidenced by the quick, unprintable way he dispatches one of Sue's white boyfriends when he sees the couple being threatened by a group of African American teenagers. (It's clear from this scene that there's only one epithet the unreconstructed racist considers off-limits.)

That Walt essentially means no harm is telegraphed when he visits his Italian barber, with whom he engages in a playfully escalating game of mutually assured defamation, their ethnic slurs and put-downs piling up like so much politically incorrect cordwood. One of the most surprising things about "Gran Torino" is how acidly funny it is, and viewers will no doubt find themselves breaking into increasingly disbelieving guffaws as Walt lands yet another oh-no-he-didn't zinger. 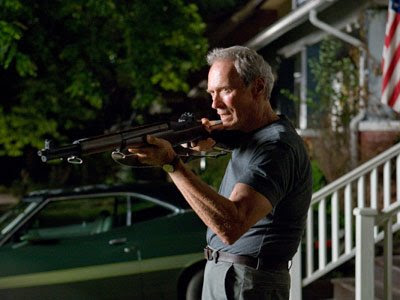 And in part they'll be laughing at Eastwood himself, as he takes the role he's best known for -- the outlaw with perfect aim and an unerring moral code -- and proves yet again that there's room for such a creature, even in this postmodern, multiculti age. His face is still handsome, even with his eyes creased into slits and his mouth straightened into a grim, unsmiling line. His body, even with the pants winched up to his sternum, is a tightly coiled instrument of misery and rage. The subtext of one of Walt's recurring gestures, wherein he forms his hand into an imaginary gun and pretends to shoot, is unmistakable. The man who brought Josey Wales and Dirty Harry to life doesn't even need a gun anymore. His withering contempt is fatal enough.

As its title suggests, "Gran Torino" is a nostalgia trip, in this case for the 1970s vigilante action pictures that Eastwood made his own. Anyone familiar with Eastwood as a director knows better than to expect gritty realism from one of his movies. Here, he revives the contours and lines of a pulp genre as lovingly as Walt restores his car, proffering the kind of heightened drama, starchy episodic structure and stock characters that, like those breathtaking epithets, perhaps only someone of his considerable capital can get away with.

And anyone familiar with Eastwood's movies, especially weepers like "Million Dollar Baby," will not be surprised at the tear-jerking streak that runs through "Gran Torino" like a broken yellow line. In this case, another "Camille"-like subplot ends not sentimentally as much as sacramentally, with a character splayed out in a symbolic crucifixion that, staged by any other filmmaker, would invite eye-rolling derision.

But "Gran Torino" isn't the work of just any filmmaker. It's a Clint Eastwood production, and as such it overcomes its only-in-the-movies conventions to exude its own undeniable, and uniquely potent, brand of authenticity. There's a gentle, elegiac grandeur to "Gran Torino," even at its most self-conscious and highly pitched, that befits Eastwood's transcendent place in American culture. Indeed, probably only someone of his symbolic vengeful power could deliver such a welcome seasonal message of tough, twisted redemption. So, Merry Christmas -- and Clint bless us, everyone. 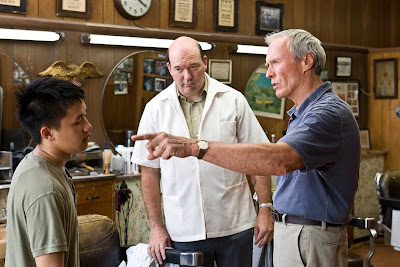 Clint Eastwood’s hinted that Gran Torino might be his last turn in front of the camera. If that’s true, he could not have chose for himself a more fitting farewell. Without a hint of the self-referential, Torino touches on the many iconic moments of both his best genre pictures and more serious fare. Most of all, he’s masterfully blended both into a hard-hitting, supremely satisfying story that carries big themes with a deft gentleness.

Working from a superb script by relative newcomer Nick Schenk, Gran Torino opens in just the kind of Catholic church you expect to see in an old Detroit suburb. Walt Kowalski (Eastwood) is there to bury his beloved wife and to disapprove of the rest of his family. Having toughed his way through as a soldier in Korea and decades on the Ford assembly line, the strongest emotion he can summon for his spoiled kin is sarcastic disapproval with a side order of contempt. And they deserve it.

Walt growls. Not figuratively, literally. He growls at the belly-pierced granddaughter who queries him on what he’ll leave her in his will, he growls at his son (Brian Haley) who thinks he’s outgrown the old, simple man who is his father, and he growls at Father Janovich (Christopher Carley), a baby-faced Priest who refuses to go away because he promised a dying wife he’d get Walt to agree to take confession.

At 78 (Eastwood plays his real age), Walt can live with this. He may not have made peace with his demons, but he is used to them and keeps life’s pleasures simple. Retired with a big old yellow dog for company, all Walt wants from life is his morning coffee, afternoon Pabst Blue Ribbon, a pack of filterless smokes and a quiet porch to enjoy them on.

Walt’s neighborhood, at least the one outside the time capsule Walt calls home, is changing. The area’s poorer, the street gangs cruise by and Hmong immigrants and refugees — or as Walt casually refers to them: gooks, fish heads, chinks – are moving in, including a large extended family right next door — so many that Walt wonders how all the ”zipperheads” fit. The only relationship Walt wants with his new neighbors is the one where he growls epithet’s under his breath and they in turn cuss him out in their native tongue. “She hates me,” Walt says to himself with genuine dismay as the old grandmother lashes out in more of a fury than usual.

It’s a merciless Asian gang that changes Walt’s comfortable neighbor-dynmic. For a gang initiation, Thao — the quiet teenage boy who lives next door — attempts to steal Walt’s prized possession: a cherry, 1972 Gran Torino. Thao isn’t interested or cut out for ganglife, but he is easily bullied and soon Walt grudgingly becomes both his and his family’s protector, mentor, and friend. But the gang’s not just going to go away and so they’re always there, a presence undermining the harmony – circling, waiting, willing to take this as far as they must to get what they want.

Many have compared Torino to Dirty Harry (1971), but The Outlaw Josey Wales (1976) is more like it. Like Josey, Walt is a widower driven to violence, determined to remain alone, but in the end saddled with a ragtag family that humanizes him as he protects them. Better yet, like Josey, Walt likes to spit a little tobacco before letting things get “real f***ing ugly.” Torino’s themes of faith, mentoring, and an everyday man coming to terms with the winter of his years, however, are straight out of Million Dollar Baby (2004), and handled with the same beautiful and touching precision. 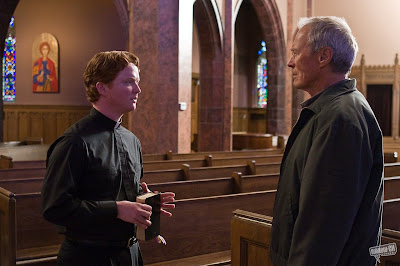 Most of the middle of Torino is taken up with Walt getting to know his Hmong neighbors and the taking of Thao under his wing. The pace is leisurely and pure Eastwood, but the script and Eastwood’s performance are so good that this is just as much fun as the tough stuff. Thankfully the film avoids political correctness like a plague. Certainly Walt changes, but not in a moment of false enlightenment after some heavy-handed lecture, but through the normal, human process of getting to know another. Walt’s words never change but the meaning behind them change completely.

Eastwood’s nothing short of marvelous playing this deceptively complicated and deep character. As an actor, he takes real chances with Walt’s growls and assorted tics. The characterization is performed on a knife edge. One degree this way or that and Eastwood’s making a fool of himself. But it never happens. Clint holds the line like a pro and creates a rarity on film anymore: a convincing, human character who’s larger-than-life.

Great films bring everything together in a final moment. When done right, the story, subplots and themes stay true for the climax but still surprise. This is where Torino most shines. After two hours your investment in the characters is complete, and in keeping with both the pulpier aspects of the genre and the story’s bigger ideas, Eastwood the performer and filmmaker brings together a perfect final moment that lingers for days and might even be the summation of a career made up of both genre grit and thoughtful, thematically-driven drama.

The moment is distilled Eastwood — the blend of hero, anti-hero and explorer of the dark human condition just within the grasp of salvation. For those of us who have never known life without the promise of another Clint Eastwood film, Gran Torino makes for a suitably tough and touching farewell.

Somewhere near the middle of the second act there’s a brief shot of Walt on his porch lighting a cigarette. Anyone who’s seen A Fistful of Dollars – the film that started it all and made Eastwood an international superstar in 1964 – will recognize Eastwood’s pose.