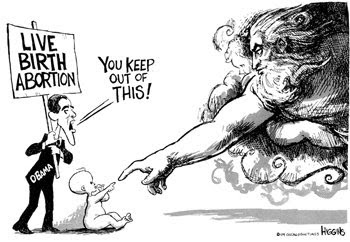 WASHINGTON -- Sen. Robert P. Casey Jr.'s endorsement of Barack Obama last week -- "I believe in this guy like I've never believed in a candidate in my life" -- recalled another dramatic moment in Democratic politics. In the summer of 1992, as Bill Clinton solidified his control over the Democratic Party, Robert P. Casey Sr., the senator's father, was banned from speaking to the Democratic convention for the heresy of being pro-life.

The elder Casey (now deceased) was then the sitting governor of Pennsylvania -- one of the most prominent elected Democrats in the country. He was an economic progressive in the Roosevelt tradition. But his Irish Catholic conscience led him to oppose abortion. So the Clintons chose to humiliate him. It was a sign and a warning of much mean-spirited pettiness to come.

The younger Casey, no doubt, is a sincere fan of Obama. He also must have found it satisfying to help along the cycle of political justice.

But by his father's standard of social justice for the unborn, Obama is badly lacking.

Obama has not made abortion rights the shouted refrain of his campaign, as other Democrats have done. He seems to realize that pro-choice enthusiasm is inconsistent with a reputation for post-partisanship.

But Obama's record on abortion is extreme. He opposed the ban on partial-birth abortion -- a practice a fellow Democrat, the late Daniel Patrick Moynihan, once called "too close to infanticide." Obama strongly criticized the Supreme Court decision upholding the partial-birth ban. In the Illinois state Senate, he opposed a bill similar to the Born Alive Infant Protection Act, which prevents the killing of infants mistakenly left alive by abortion. And now Obama has oddly claimed he would not want his daughters to be "punished with a baby" because of a crisis pregnancy -- hardly a welcoming attitude toward new life.

For decades, most Democrats and many Republicans have hoped the political debate on abortion would simply go away. But it is the issue that does not die. Recent polls have shown that young people are more likely to support abortion restrictions than their elders. Few Americans oppose abortion under every circumstance, but a majority oppose most of the abortions that actually take place -- generally supporting the procedure only in cases of rape, incest or to save the life of the mother.

Perhaps this is a revolt against a culture of disposability. Perhaps it reflects the continuing revolution of ultrasound technology -- what might be called the "Juno" effect. In the delightful movie by that name, the protagonist, a pregnant teen seeking an abortion, is confronted by a classmate who informs her that the unborn child already has fingernails -- which causes second thoughts. A worthless part of its mother's body -- a clump of protoplasmic rubbish -- doesn't have fingernails.

Abortion is an unavoidable moral issue. It also has broader political significance. Democrats of a past generation -- the generation of Hubert Humphrey and Martin Luther King -- spoke about building a beloved community that cared especially for the elderly, the weak, the disadvantaged and the young. The advance of pro-choice policies imported a different ideology into the Democratic Party -- the absolute triumph of individualism. The rights and choices of adults have become paramount, even at the expense of other, voiceless members of the community.

These trends reached their logical culmination during a congressional debate on partial-birth abortion in 1999. When Democratic Sen. Barbara Boxer was pressed to affirm that she opposed the medical killing of children after birth, she refused to commit, saying that children only deserve legal protection "when you bring your baby home." It was unclear if this includes the car trip or not.

Having endorsed partial-birth abortion, Obama has little room for maneuver on the broader issue. But he does have some. He could take the wise counsel of evangelical Democrats such as Amy Sullivan and come out strongly for policies that would reduce the number of abortions -- support for pregnant women, abstinence education, the responsible promotion of birth control. An organization called Democrats for Life has proposed the creation of a "95-10 Initiative" in which states and the federal government would work toward the reduction of abortion rates by 95 percent within 10 years. That would be a unifying national goal.

Such efforts will not please many pro-lifers, who are waiting on Obama to support any type of legal protection for the unborn. But a real effort to reduce the number of abortions would indicate that Obama's Democratic Party is moving beyond its humiliation of Gov. Casey. And maybe Sen. Robert P. Casey Jr., with his newfound leverage, could insist upon it.

michaelgerson@cfr.org
Posted by jtf at 2:20 PM