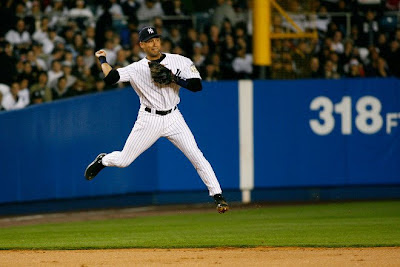 NEW YORK - APRIL 01: Derek Jeter makes the throw to second for the out to end the third inning after fielding the hit by Alex Rios #15 of the Toronto Blue Jays during Opening Day at Yankee Stadium April 1. (Photo by Jeff Zelevansky/Getty Images)


At this stage of his career, which is to say his prime, there is only one question left about Derek Jeter: monument or plaque?

A person couldn't help getting in a historical mood, what with the Yankees playing their final Opening Day (at night) in the original (albeit remodeled) Yankee Stadium. So it was only natural to wonder how the captain and symbol of this era will be remembered once they move Monument Park to the glittering new (yet traditional) Yankee Stadium next door.

Jeter couldn't escape history's tap on the shoulder. He was asked about the impending move on Monday, before the originally scheduled Opening Day was rained out. He had agreed to appear at a rare pregame news conference because what he thinks matters. At 33, he is too young to be an elder statesman, but he has been around long enough to be the face and heart and soul of the most famous team on Earth.

Let's put it this way. He has come a long way from being the skinny kid who referred to the manager as Mr. Torre. For all the respect the shortstop has earned, people on the team ought to be calling him "Mr. Jeter."

For the record, he believes the Yankees legacy will make the transition just fine.

Fact is, he is the one who will carry the torch on behalf of Babe Ruth, Lou Gehrig, Joe DiMaggio, Mickey Mantle, Yogi Berra, Thurman Munson and Reggie Jackson. And that brings us back to the question of where Jeter eventually will wind up in the relocated Monument Park.

Years from now, when he spends all his days happily settled in that new home he is building in Florida, the Yankees are going to honor him. Fans are going to remember nights like Tuesday night, when they gave him a huge ovation as he ran to the first-base line when his name was introduced. They will give him an even bigger ovation that day, as the club retires his No. 2 -- and rewards him with either a plaque, like the ones Berra, Whitey Ford, Jackson, Phil Rizzuto and others have; or a monument, like Ruth, Gehrig, Miller Huggins, DiMaggio and Mantle have.

The case for a plaque is that, so far he isn't a jaw-dropping slugger, league batting champion, record setter or even a one-time Most Valuable Player. Is he a bigger deal than Yogi and Whitey?

The case for a monument so far is about a hundred-fold, such as he is one of the great clutch players ever, has four rings, is very likely to reach 3,000 hits, has three Gold Gloves and breezily handles the responsibility of being an icon on the most pressurized team in the non-stop information age.

I vote for the monument.

He has simply done too much unforgettable stuff to deny him getting his career etched in granite. The home run that broke the Mets' back, the backhanded relay flip that doomed the Athletics, the face-busting rush into the seats for that foul ball against the Red Sox.

Joe Girardi, a teammate when Jeter was a rookie and his manager now, has seen Jeter evolve. He pointed out that it hasn't been all that much of an evolution. True, the photos from 1996 made current teammates say he looked like flagpole-thin pitcher Edwar Ramirez. "He's filled out a little bit," Girardi said, adding, "his attitude is the same. I think it's always youthful enthusiasm."

There also is the Jeter that most people don't see. At 3:40 Tuesday afternoon, before the Yankees' 3-2 win over the Blue Jays, neophyte first baseman Shelley Duncan was taking ground balls and practicing throws to second. Only one other infielder was out there, serving as a target, encourager, teacher. It was Jeter. He even helped pick up the practice baseballs and put them in the bag.

"It wasn't the first time," Duncan said. "Aside from Derek being made into some sort of character, when you're actually working with him, he's amazing. He's an amazing teammate."

Sounds like an epigram to me. Cast it in bronze, save it for the millions who will visit the new Yankee Stadium next door.

With all due respect to those fancy digs he is planning in Florida, the new ballpark in the Bronx will be the true House that Jeter Built.
Posted by jtf at 6:51 AM