Only Rock ’N’ Roll, but They’re Still at It

As you scrutinize the aging bodies of the Rolling Stones in Martin Scorsese’s rip-roaring concert documentary “Shine a Light,” there is ample evidence that rock ’n’ roll may hold the secret of eternal vitality, if not eternal beauty.

Mick Jagger, Keith Richards and Ronnie Wood, the quartet’s three skinny members, certainly look their ages. But there is nothing stodgy about them. The strenuous rock ’n’ roll life has left them sinewy and lean, like longtime marathon runners. (The staid, above-it-all drummer, Charlie Watts, is the exception.) 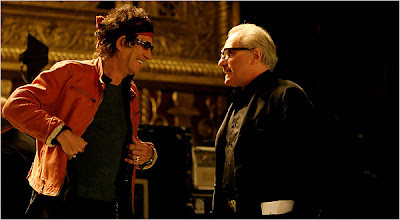 Keith Richards with Martin Scorsese in the concert documentary “Shine a Light.”

Mr. Jagger’s lined face, with its deflated balloon lips, suggests a double exposure of Dorian Gray and his infamous portrait, at once defiantly youthful and creepily gaunt. The simian Mr. Richards, whose upper arm flesh has shriveled, resembles an old madam chewing over her secrets. As he plays, his lips dangling a cigarette, he leans back into his snarling guitar and a joyful grin spreads across his face. He could be the world’s happiest young older man: Peter Pan as a wizened Gypsy fortuneteller.
For the Rolling Stones appear supremely alive inside their giant, self-created rock ’n’ roll machine. The sheer pleasure of making music that keens and growls like a pack of ravenous alley cats is obviously what keeps them going. Why should they ever stop? At the heart of the gizmo, Mr. Jagger whirls, leaps, struts, wiggles his tiny hips and sashays around like an androgynous tart prowling a street corner at 3 a.m.
Ultimately the movie is Mr. Jagger’s show. If his long-running circus act is ridiculous when you analyze it, conjoined to the Stones’ music, it becomes a phenomenal high-wire exhibition of agility, stamina and cheek. He was 63 when the concert was filmed over two nights at the Beacon Theater in New York in the fall of 2006. From certain angles, when the blazing lights hit his face, he suggests an agitated zombie with a full head of hair. But if you squint until your vision blurs, he is the same tireless, taunting cock of the walk that he has always been.
The film, which used 18 cameras, many operated by eminent cinematographers, is an unabashedly reverent tribute to the Stones made in the same spirit as “The Last Waltz,” Mr. Scorsese’s elegiac 1978 movie of the Band’s farewell concert, and his more recent Bob Dylan biography, “No Direction Home.” That said, it is far less ambitious, and less overtly romantic.
This is a concert film with frills that places you on the stage with the band and, with a finely trained eye, observes the musicians’ interactions with one another and with the audience. The visual rhythms and unobtrusive editing reflect the contradictory status of the Stones as a majestic rock institution and a gang of down-and-dirty bad boys thumbing their noses at propriety while scooping up all the girls.
Although there is no frantic cutting back and forth, the cameras are continually on the move. As the movie artfully shifts its gaze, it helps you see much more than you could if you actually attended the concert. The audience is largely ignored.
Mr. Scorsese is a besotted rock ’n’ roll fan who wholeheartedly embraces its mythology. Its scruffy guitar heroes and roustabout rebel-prophets are the musical equivalents of the hotheads and outlaws who populate so many of his films. Almost every shot of “Shine a Light” conveys his excitement.
Prefaced by preconcert footage and interwoven with excerpts from television interviews from the Stones’ younger days, going back to 1964, “Shine a Light” makes no attempt to explain the Stones or to tell their story. All it wants to do is to give you the best seat in the house and the best sound you could possibly hope for.
The program is a best-of selection that concentrates on Stones classics, including “Jumpin’ Jack Flash,” “Shattered,” “Some Girls,” “Tumbling Dice,” “Sympathy for the Devil,” “Start Me Up” and “(I Can’t Get No) Satisfaction.” The only misfire is the quaint, quasi chamber-pop ballad “As Tears Go By,” a hit for Marianne Faithfull in 1964, which sounds incongruous in Mr. Jagger’s parched delivery. Otherwise, the full-tilt rock concert roars along like a steam engine. A horn section, a keyboardist (Chuck Leavell), a bass guitarist (Darryl Jones) and three backup singers augment the band.
There are three special guests: in ascending order of interest, Jack White, who trades vocals with Mr. Jagger on “Loving Cup”; Christina Aguilera, who shares the vocals on “Live With Me” and bestows demure pecks on the cheek to the musicians as she leaves the stage; and the great blues guitarist and singer Buddy Guy performing an old Muddy Waters song, “Champagne and Reefer.” (There is also the Clinton family in the audience, on hand to celebrate Bill Clinton’s 60th birthday.)
Like Muddy Waters, whom I saw in the Beacon Theater shortly before his death in 1983 at 70, Mr. Guy, 70 when “Shine a Light” was filmed, is a mighty blues presence, one who puts the Stones in historical perspective. Muddy Waters was an ominous force of raw blues aggression. Mr. Guy, though equally imposing, is a more benign, patriarchal figure.
Beside him, Mr. Jagger and company are mischievous bohemian whippersnappers churning up variations on their elders’ musical bedrock. It is obviously a thrilling game to play into your 60s and beyond, if you’ve still got the juice. And the Stones have the juice. But it is ultimately just a game.
“Shine a Light” is rated PG-13 (Parents strongly cautioned) for drug references in the songs, and smoking.
SHINE A LIGHT
Opens on Friday nationwide.
Directed by Martin Scorsese; director of photography, Robert Richardson; edited by David Tedeschi; music by the Rolling Stones; produced by Victoria Pearman, Michael Cohl, Zane Weiner and Steve Bing; released by Paramount Pictures. Running time: 2 hours 2 minutes.
Posted by jtf at 11:55 AM