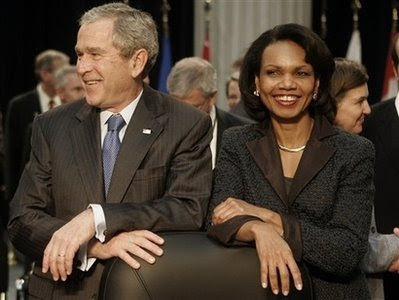 US President George W. Bush and Secretary of State Condoleezza Rice smile together during a session with invitees, at the NATO Summit conference in Bucharest, Thursday April 3, 2008.

A new Hamas TV production for Palestinian children shows a puppet stabbing President Bush to death after telling him the White House has been turned into a mosque. The Palestinians elected Hamas as their leadership by a wide margin in January 2006, and in a poll two weeks ago a majority of Palestinians said they would vote for current Hamas leader Ismail Haniyeh for president if there were new Palestinian elections.

After the massacre at the Mercaz Harav yeshiva in Jerusalem on March 6, Bush called Israeli prime minister Ehud Olmert and said “This barbaric and vicious attack on innocent civilians deserves the condemnation of every nation.” But the same poll of Palestinians found 84% of them approving the attack. And the official newspaper of the Palestinian Authority featured a front-page photo of the dead terrorist over a caption calling him a shahid (martyr).

To say that Bush and his secretary of state don’t appear impressed by these problematic proclivities of the Palestinians is a great understatement. Condi Rice was here yet again this week in what has become a grimly obsessive quest to award the West Bank and Gaza Palestinians—in their current condition of moral development—with a sovereign state by the end of 2008.

Rice’s visit was seen as aimed at ensuring “progress” by the time Bush visits Israel in May to mark its 60th anniversary. Any remaining doubts as to whether Bush and Rice are serious—or just intended the “Annapolis process” as a spectacle to appease broader Arab opinion—can be laid to rest by the fact that Bush has also invited PA president Mahmoud Abbas to the White House in early May.

So Rice came to Israel with an agenda of “easing conditions” for the Palestinians—meaning mainly the removal of roadblocks and checkpoints in the West Bank that the entire Israeli defense establishment regards as a key element in Israel’s mostly successful containment of West Bank terror over the past couple of years.

Rice’s main foil was reportedly Defense Minister Ehud Barak. A former military hero, a left-of-center, Labor politician who himself—as prime minister—made draconian offers to Yasser Arafat in 2000 and 2001, Barak is said to be concerned about jeopardizing the recent security achievements and, concurrently, his own ambitions to be prime minister again.

Nonetheless, Rice didn’t find Barak too tough a customer this time and, along with her U.S. delegation, was reportedly “amazed” at the gestures Barak offered in a three-way meeting with her and PA prime minister Salam Fayyad. These include, among other things, removing a major checkpoint near Ramallah and 50 dirt roadblocks, allowing 700 PA policemen (trained in Jordan under U.S. supervision) to enter the West Bank terror-town of Jenin, building a city or several neighborhoods near Ramallah, increasing the number of Palestinians allowed to work in Israel, and easing security checks on Palestinian public figures passing through crossings.

Part of why Barak folded so easily has to do with the pressure on him: as Jerusalem Post analyst Calev Ben-David noted,

it can’t be easy for Rice to sit opposite the most decorated soldier in Israeli military history, and counter his arguments that the concessions she is demanding risk endangering the security of his nation’s citizens. Perhaps that helps explain why she has enlisted some heavy brass to help her in that mission, a trio of top US military officials: Gen. James Jones, Lt.-Gen. William Fraser and Lt.-Gen. Keith Dayton.

As Ben-David details, Jones—who is no less than former Supreme Allied Commander of Europe—is said to help Rice with putting the “Israeli-Palestinian conflict” in a larger context and is the one who already “leaned on Barak to make security concessions ahead of the secretary’s visit.”

As for Fraser, he’s a former top-level air force commander and currently assistant to the chairman of the Joint Chiefs of Staff as well as Rice’s top military adviser, and he’s also entrusted with monitoring Israel and the PA’s compliance with the “process.”

Dayton , also no lightweight, was director of the Iraq Survey Group and a senior member of the Joint Chiefs, and helps oversee the training of the Palestinian security forces that Bush and Rice still hallucinate to be a pro-Western contingent that will resist and, if necessary, defeat Hamas. Ben-David speaks of “rumored tensions between Dayton and Barak, the latter reportedly bristling at [ Dayton ’s] criticism of [his] unwillingness to approve giving the PA security forces more operational latitude and higher-level military equipment.”

If that sounds like a lot of pressure on the defense minister of a democratic ally, it is. If it sounds like the idea that Israel is supposed to be a sovereign country in its own right is getting lost in the shuffle here, it is.

Barak’s recent reference to the decision to allow PA policemen into Jenin as a “calculated risk” prompted a letter to him from Nachman Zoldan, whose son Ido Zoldan—29 and a father of two—was murdered last November in a shooting attack by two PA policemen. Nachman Zoldan asked Barak to

reconsider your decision. Over the years, considerable facts and figures have emerged that all point to deep involvement of those same Palestinian security forces...in the terror campaign against Israel . This involvement in terror, ranging from intelligence gathering through actual terrorist acts, is carried out by uniformed and plainclothed Palestinian policemen as well as high-ranking police officers….

Recent terrorist attacks have displayed a regrettably much-improved performance of the terrorist organizations. We are therefore very concerned regarding permission you granted to these same policemen to undergo training in Jordan . This training, under American guidance, will grant them heightened professionalism that will enable them, according to past experience, to act in the future against us, civilians and IDF soldiers alike, with increased effectiveness.

an urgent meeting regarding your appalling justification of your decision to “take calculated risks.” The many ramifications of this statement include life in the shadow of bereavement and loss, the ongoing hellishness of pain and grief for the immediate families and extended circles of friends of slain victims, and the rage at the murders. And the murdered victims!...“salt of the earth” who placed their faith in you, their elected leaders, to protect them. And you take “calculated risks” with their lives! You, our elected representatives, do not take risks with your own lives, but are closely guarded and secured at great monetary cost to the public. Therefore it is not ethically appropriate to cast “calculated risks” on the unwitting public.

As always it is hard to know how to apportion the blame between acquiescent Israeli leaders and American leaders who pressure them. One thing that appears certain is that even if the bereaved father’s letter had been brought to Rice’s, or Bush’s, attention, its pathos would not have mattered to them.

Rice has already expressed her perception of the Palestinians as analogous to blacks in the segregated U.S. south. As for what motivates Bush in this policy of bullying an ally into going against its very hard-won security wisdom and endangering its citizens in the name of creating a terror state—I wish I knew.

P. David Hornik is a freelance writer and translator living in Tel Aviv. He blogs at http://pdavidhornik.typepad.com/. He can be reached at pdavidh2001@yahoo.com.