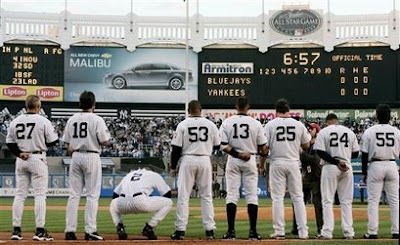 The preliminaries had already been kind of wonderful at Yankee Stadium, Opening Night now instead of Opening Day, a great big Yankee opening under the lights this time.

Melky Cabrera had made two spectacular plays in the outfield, top of the fourth against the Blue Jays, the best back-to-back plays any Yankee center fielder could ever make in that outfield, the Grand Concourse of baseball. First Melky had run a mile to his left in right-center and reached his glove across his body and taken at least a double away from Lyle Overbay, then had run the other way on Aaron Hill, like he was running toward the new Stadium, laid out like some soccer goalie and buried another double in his glove. New memories for the old place, just like that, reminding you all over again what it still sounds like when the Yankees are doing something.

Then Melky, the kid who nearly went to the Twins for Johan Santana, hit a 3-2 pitch down the right-field line in the sixth, a high shot that seemed to go up as high as the lights at the top of the place before landing in the first row of the stands, just inside the right-field foul pole. It is 314 feet out there. Maybe this one went 315. Or 316. Whatever. It was Yankees 2 and Blue Jays 2 on Opening Night. 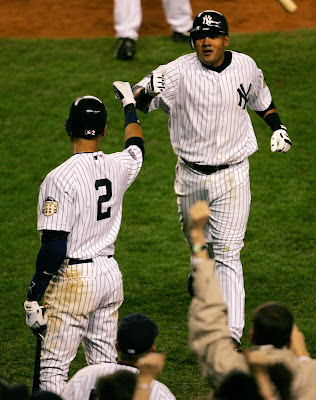 NEW YORK - APRIL 01: Melky Cabrera #28 of the New York Yankees celebrates with teammate Derek Jeter #2 after hitting a solo homerun in the bottom of the sixth inning to tie the game against the Toronto Blue Jays during Opening Day at Yankee Stadium April 1, 2008 in the Bronx borough of New York City. (Photo by Chris Trotman/Getty Images)

Jason Giambi, in looking for a bunt, helped keep it that way, making this amazing leap and catch of a line drive hit by Marco Scutaro. Aaron Hill, who had just doubled, had to stay at second. Chien Ming-Wang got out of the top of the seventh at 2-2. The Yankees got a run in the bottom of the inning off Roy Halladay. Now it was 3-2.

Now it was 9:07 at Yankee Stadium, first night of the last season on this side of the street, and the blue doors opened out in front of the monuments and here came Joba Chamberlain. There is only one cheer like it out of those doors in the history of the Yankees, and that is the cheer when Mo Rivera comes through them, the way he would an inning from now if Joba did his job.

For now it was the kid's show against the Blue Jays. For now the job was what it was down the stretch last season, it was to get the game to Rivera. Chamberlain got a ground ball out of Shannon Stewart. Walked Alex Rios on a 3-2 pitch. Went to 2-2 on Vernon Wells, the best the Blue Jays had. There was a summer noise to the Stadium as the place got up. A late-season roar. Foul ball from Wells to the right. Still 2-2. The place still up as Wells took a third strike and Rios stole second.

Two outs now in the top of the eighth, tying run on second. The kid went to 0-2 on Frank Thomas and just like that the Stadium was crazy with noise. He threw one 97 past Frank Thomas, threw all he had, and Thomas swung right through that baby for strike three.

Jorge Posada was asked if he'd called for a 97-mph fastball.

The kid threw some punches in the air as he came hard off the mound toward first base and there was another roar for him, just to remind the kid where he was. Before the game, Reggie Jackson, who threw out the first pitch, walked out to do that with Yogi Berra as his wing man, had been talking about how being a Yankee had changed everything for him, even after winning three World Series as a member of the Oakland A's, one of the great teams of all time. 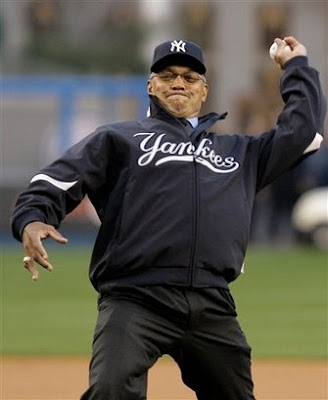 Just like that, the Stadium dialed itself all the way up on Opening Night, jazzed itself up. RBI double from A-Rod in the bottom of the first, a ball that must have sounded like a police siren coming off his bat. Melky's catches and Melky's moon shot and then Giambi showing more ups than anybody knew he had to make that play on Scutaro in the seventh.

Then Joba, and that fastball to Thomas, one that must have rattled some of the girders across the street when it ended up in Jorge Posada's glove. So they were through the eighth and then the bullpen doors opened again, and everybody heard "Enter Sandman" and here came Rivera. 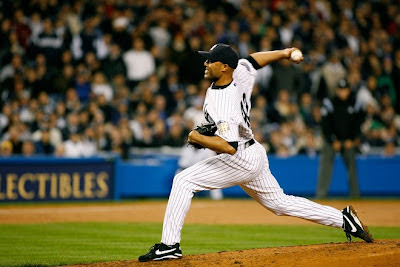 Mo Rivera threw his first pitch to Lyle Overbay and there were lights from cameras all over the ballpark, the kind you see on the first pitch of the game, not in the ninth. But then all the memories are supposed to be even more valuable this year, this side of 161st. That is just the way it is going to be. Rivera put one on the outside corner and Overbay just stared at it for strike three, like some dealer had turned over a card and busted him out.

One out in the ninth.

"Let's Go Yankees!" chants rocked the place. Rivera busted one in on Scutaro's hands, the kind of pitch he has thrown a thousand times in the ninth inning, and Scutaro beat it to Robinson Cano at second, and it was over. The night shouldn't have been nearly this loud, this exciting. It was. Whole 'nother place. Still.
Posted by jtf at 7:00 AM