"Magic" at KeyArena: Bruce Springsteen and the E Street Band 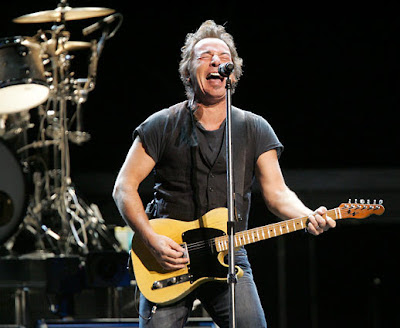 Like a coach on fire at the Final Four, Bruce Springsteen rallied, inspired and sparked his E Street Band into giving their all Saturday night in a great concert at a packed Key. His student body, his congregation, was feeling the spirit, as he testified to the power of love in troubled times.

He railed over "the rolling back of our civil liberties" and "attacks on our Constitution" and preached about a new wind blowing.

"Who'll be the last to die for a mistake?" he sang about the Iraq War, a powerful lyric that took on new meaning following the recent grim milestone of 4,000 American military casualties. It came in a song called "Last To Die," from his bracing new album, "Magic." Most of the songs from it were included in the seamless two-and-a-half hour set, including "Radio Nowhere," "Livin' In the Future" and the crowd's favorite, "Long Walk Home." They fit perfectly with classics like "No Surrender," "Badlands" and "Born to Run."

A nonstop dynamo, Springsteen roamed the flat, unadorned stage, constantly connecting with each of the eight, black-clad E Street Band musicians, pushing, praising and prodding them. The low-slung stage was close enough to fans that they were able to touch him, grab his legs, slap his hand.

He lifted his arms, urging everyone to stand and join in, and cupped his ears, asking for crowd response. He grabbed hand-made signs with song requests, played the songs — "Waitin' On A Sunny Day," "Rosalita (Come Out Tonight)" — then signed the posters and tossed them back to their owners. He effectively erased the barrier between the band and the fans. 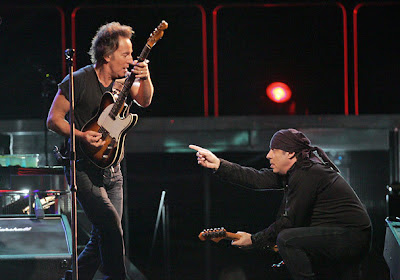 His guitar-playing was stronger than ever, especially his "Lonesome Day" solo. He and Steve Van Zandt traded licks on several songs, and Nils Lofgren turned the place out with his blistering "Because the Night" solo. The whole band was in peak form, but Max Weinberg deserves special praise for his powerful, roof-raising drumming.

And what's this about Clarence Clemons slowing down? He moved a little slower than he used to, and sat on a thronelike chair occasionally, but came through strong as ever with his sax solos, bringing cheers from the pumped-up crowd.

Springsteen played harmonica more searingly than ever, especially during the rollin' and tumblin' blues romp, "Reason to Believe." He hung onto the mike stand and bent over backward, almost touching the floor. He was full of playful, youthful energy all night long.

The set started an hour past the 7:30 showtime with "Trapped," with the thematic lyric, "The truth will set me free." A few songs in, when they bungled the opening to "Gypsy Biker," Springsteen quipped, "We're flyin' by the seat of our pants. A little panic is good for the system." That honest, easygoing vibe prevailed through the whole wonderful night. 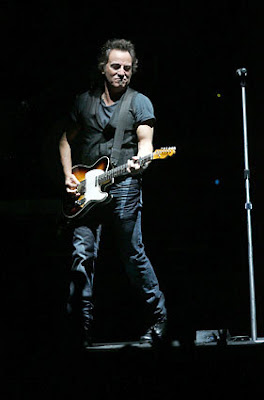 Setlist:
Trapped
Radio Nowhere
No Surrender
Lonesome Day
Gypsy Biker
Magic
Reason to Believe
Darkness on the Edge of Town
Because the Night
She's the One
Livin' in the Future
The Promised Land
Waitin' on a Sunny Day
Your Own Worst Enemy
Point Blank
Devil's Arcade
The Rising
Last to Die
Long Walk Home
Badlands
* * *
Tenth Avenue Freeze-out
Rosalita
Born to Run
American Land
Posted by jtf at 11:44 AM