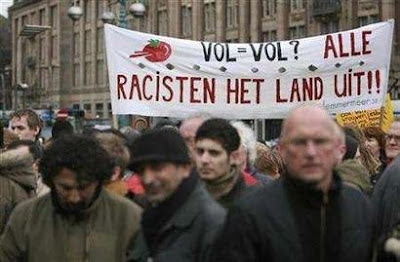 Geert Wilder's Campaign to Save The West

The War for Europe is heating up. Despite the somnambulism of many Europeans themselves, immersed in comfortable lifestyles, immigration realist Geert Wilders is stirring the pot to arouse the public before it's too late.

And there's nothing like telling the truth about Islam to arouse people.

Wilder, a member of the Dutch Parliament, recently released a long-awaited (and dreaded) short film called Fitna (strife, in Arabic) to reveal that violence was built into Islam from the start.

Fitna is brief, only 15 minutes long, but it packs a lot into that time. The point is unmistakable: murderous terrorism is not the result of a noble religion being "hijacked" by extremists who misunderstand the teachings. Islam's history is filled with war and bloodshed because its holy book has numerous instructions for followers to deal violently with non-Muslims.

Exhortations to slay the unbeliever are common. Among the major faiths, only Islam needs to define itself constantly as (in George W. Bush’s words) a "religion of peace"—because it isn't. Fitna leafs through pages of the Koran, with pertinent verses highlighted followed by an act of terrorism as an example of Koranic sensibility in action.

That scripture is followed by a film clip of two planes flying into the World Trade Center, with a trapped woman's frantic call to an emergency operator: "I'm going to die, aren't I?... Yes, I'm going to die... I'm going to die. Please, God... It's so hot. I'm burning up."

The scene then switches to the horrific Atocha train station bombing in Spain, with religious comments from imams.

What makes Allah happy? Allah is happy when non-Muslims get killed. Annihilate the infidels and the polytheists. Your (Allah's) enemies and the enemies of the religion. Allah, count them and kill them to the last one, and don't leave even one.

See for yourself: Fitna (linked at JihadWatch).

Wilders wanted Fitna to be shown on Dutch television, but no stations were brave enough to broadcast it. He turned to the internet and persuaded Liveleak.com to post the film. In a short time, it was pulled because of "threats to our staff of a very serious nature". In a couple days, it was back, so presumably precautions were taken.

When it comes to telling the truth about the culture of Islam, no good deed goes unpunished, and the appeasement brigade has been in full activation mode. The Secretary General issued a press release condemning "hate speech." The Danish PM Anders Fogh Rasmussen [Send him mail] denounced the film and said he found the "expressions extremely offensive." Dutch PM Jan Balkenende said he rejected the interpretation that "equates Islam with violence." Support for the free speech that undergirds representative government has been sadly lacking among Euro-elites in this episode.

Intimidation works against those who don't value freedom.

To sign a petition in support of Geert Wilders and his right to free expression, click here.
In our society, based largely although imperfectly on reason, it is easy to lose track of the primitive nature of Islamic fanatics, their characteristic cruelties and rigid belief in Muslim superiority. The public can easily forget Islam's goal of world domination under a caliphate, when the ACLU and the Council on American Islamic Relations (CAIR) are working to undermine America.

Geert Wilders doesn't want us to forget what's important—saving western civilization in Europe.
A little background is in order. On Nov 2, 2004, Dutch artist Theo van Gogh was assassinated on an Amsterdam street by Muslim Mohammed Bouyeri because of van Gogh's film Submission. The film, made in partnership with Ayaan Hirsi Ali, used Koranic verses to illustrate Islam's integral brutality toward women.

At that time, a handful of public figures of the Netherlands put aside their country's usual PC reticence to state the truth about the shocking murder: a well known Dutch artist was killed because Muslims thought his ideas were insulting to Islam.

One of those people speaking out was Geert Wilders. Shortly after he began discussing the cultural background to the van Gogh assassination, he received so many death threats that 24/7 police protection was required. Wilders still needs bodyguards today, now that even more members of the Religion of Peace want him dead.

Wilders is not an alienated cultural bomb thrower, but is an elected member of the Netherlands government. He is a political leader of the Party for Freedom (PVV), where he "has the most loyal following of all political parties in the Lower House" according to polling earlier this year. He was recently voted the most popular politician in the Netherlands. He is providing much-needed leadership on a vital issue that many elites prefer to sidestep. He has chosen an unusual venue—film—to make his point. But living with constant police protection has deprived him of the normal ways in which a politician communicates.

Let’s compare Geert Wilders, political leader, to another elected official on the thorny problem of leadership in the war for civilization:

George W. Bush has been worst possible war President. He launched a trillion-dollar military adventure on foreign soil, while leaving the homeland's borders wide open and the public unconnected to the ideas underlying the larger clash of cultures. To be effective, a President must name the enemy and warn the American people about what happens if the bad guys win. Instead, Bush has honored the ideology of the adversary in the White House in his annual Ramadan dinners, with little criticism from the MainStream Media [MSM].

In comparison, Geert Wilders has showed us the brutal nature of the Islamic foe, revealed by their own unapologetic words and actions. But other critics of Islam also focus on its objectionable beliefs and ideology. Wilders understands those things don't matter as much as the idiocy of allowing a fifth column to establish itself in your national home. Unwise immigration can pose a serious danger to a country's safety.

In earlier centuries, Muslim attacks on Europe were beaten back in military victories at Tours (732), Lepanto (1571) and Vienna (1683). Today Islam is accomplishing the goal of conquest through "terror and migration" as explained by scholar Bernard Lewis in a 2007 lecture at the American Enterprise Institute:

“In the eyes of a fanatical and resolute minority of Muslims, the third wave of attack on Europe has clearly begun. We should not delude ourselves as to what it is and what it means. This time it is taking different forms and two in particular: terror and migration.

“The subject of terror has been frequently discussed and in great detail, and I do not need to say very much about that now. What I do want to talk about is the other aspect of more particular relevance to Europe, and that is the question of migration.

“In earlier times, it was inconceivable that a Muslim would voluntarily move to a non-Muslim country. The jurists discuss this subject at great length in the textbooks and manuals of shari`a, but in a different form: is it permissible for a Muslim to live in or even visit a non-Muslim country?”

One of the best things about the nation-state is its boundaries that ideally keep out people who have hostile intentions and antithetical values. Multiculturalism, however, rejects that bit of common sense. It asserts that if we all hold hands kumbaya-style, then human differences will magically disappear.

But someone from the diversity committee forgot to tell the Muslims, because they are still bent on blowing us up.

Multicultural immigration, particularly Muslim (which has been increasing), has brought enemies into our midst. The European diversity disaster should scare us silly, but Political Correctness has prevented the prudent precaution of denying immigration to certain groups on a national security basis.

The poet Robert Frost famously defined a liberal as someone "too broadminded to take his own side in a quarrel".

Similarly, liberal societies are too broadminded in a multicultural sort of way to admit that the West really is better than Third-World backwaters of cultural cruelty, misogyny and dysfunction.

"I really believe that the Koran is a fascist book and Islam—which is more ideology, according to me, than religion—is something that is at least very bad for our values and our society. I’m not a cultural relativist. I believe that we should be proud of our culture. Our culture is far better than the more retarded Islamic culture."

Fitna is his plea that the West stop committing suicide through Muslim immigration. We should watch and listen.

Brenda Walker (email her) lives in Northern California and publishes two websites, LimitsToGrowth.org and ImmigrationsHumanCost.org. she hopes the success of Fitna spurs the production of more short documentaries on immigration-related subjects.

Email ThisBlogThis!Share to TwitterShare to FacebookShare to Pinterest
Labels: Europe, Geert Wilders, Islam and The West