Geert Wilders is no Right-Wing Populist 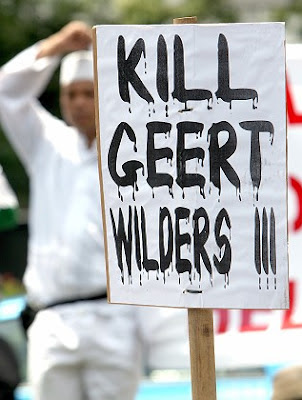 DPA
About 50 Indonesian protesters gathered outside the Dutch embassy in Jakarta on Monday to complain about "Fitna," a controversial new film by the right-wing populist Dutch politician Geert Wilders.

Dutch politician Geert Wilders may be many things, but he is not the right-wing populist he is accused of being. What the debate over his film "Fitna" reveals most clearly is the West's cowardice toward Islam.

There's a key for every lock, just as there's a perfectly fitting label for everyone who refuses to fit in. At the moment, the term "right-wing populist" is hot. Everyone and his brother is calling Dutch parliamentarian Geert Wilders by that name at the moment, but hardly any commentators or reporters have taken the time to explain what a "right-wing populist" actually is. And what distinguishes it from other political standpoints like, for instance, "left-wing populists."

For one thing, he's a radical liberal. For another, what he's doing at the moment is extremely unpopular. Six years ago, Pim Fortuyn, who was murdered by an animal rights fanatic, was also called a "right-wing populist." He was indeed very popular -- not because he was "right-wing" but because he insisted on drawing attention to things that the traditional elites of Dutch society had steadfastly ignored.

The label "right-wing populist" resonates negatively today the same way that "communist" did in the '50s and '60s, "fascist" did in the '70s and '80s and "climate change denier" does today. It saves the speaker from having to engage with the actual content of the argument and makes the bearer of the term solely responsible for the consequences of his or her actions.

If fanatical Muslims do, in fact, go ballistic over Wilder's film "Fitna," it's not because they have a flawed relationship to freedom of speech and religion, but because they've been insulted and provoked by Wilders -- or so the reasoning goes.

So, it comes as no surprise that TV presenter Tom Buhrow opened the Friday late-evening news on the German TV channel ARD with a report on the "anti-Islamic video of the right-wing populist" Geert Wilders -- as though there were a central authority in the otherwise censor-free Federal Republic of Germany that is responsible for prescribing the vocabulary of Euro-Islamic affairs. It was followed by a report on the relaxed response of Dutch Muslims, who were shown sitting in their cafes peacefully drinking coffee while Wilders raised havoc outside.

According to Buhrow's narration: "The knives are already being sharpened -- but only for the doner kebabs." But he forgot to mention that, by that point, "Fitna" had already been pulled off the video portal LiveLeak, where it had been first published (more...). The British provider had received death threats that it took as seriously as they were intended -- a not entirely irrelevant bit of information that the ARD anchorman opted to omit, so as not to confuse his viewers with too many details.

According to this interpretation of events, Wilders has only himself to blame for the fact that he has to be under 24-hour police protection and sleep in a different location every night. If he'd taken on, say, the Federation of Dutch Floriculturists, his private life would be fully intact.

Unfortunately, one needs to point out at this juncture that it's not Wilders' obsessive arrogance that has robbed him of his private life, but the memory of how and why director Theo van Gogh was murdered, namely by a Dutch-born Muslim of Moroccan heritage. He, too, probably liked sitting in cafes drinking coffee peacefully -- until one fine morning, when he set off to kill the "provocateur" van Gogh, who would presumably still be alive today if he hadn't been so silly as to make an "anti-Islamic" film.

We should take comfort in the fact that Wilders -- to quote a female Muslim writing for SPIEGEL ONLINE (more...) -- "avoids the mistake Theo van Gogh made by connecting the Koran and sexuality," which didn't go over well among "less tolerant Muslims" and which would apparently have "raised the chances of a violent reaction to Wilders' film." She doesn't feel the least bit insulted by Wilders, and goes so far as to state that Wilders' film shows "nothing but facts, even if they are somewhat one-sided."

Leaving aside the fact that it seems a little excessive to kill someone because he made a "mistake," can facts be shown any other way than one-sided?

Is it possible to have anything other than a one-sided position on the murder of Theo van Gogh, the beheading of American journalist Daniel Pearl in Pakistan, the execution of a woman in a stadium in Kabul, the hanging of homosexuals and the stoning of adulterous women in Iran? Wouldn't you then have to mention after, say, a plane crash, that such things don't happen every day and that most planes land in one piece in order not to present the facts one-sidedly?

Wilders is as "one-sided" as any filmmaker trying to compress reality into a documentary film. His film is as "anti-Islamic" as Michael Moore's are "anti-capitalist." The hostility does not lie in the eye of the beholder, but rather in the nature of the film's subject. Part of the ritualistic response of Muslim communities to the observation that Islam is not always a peaceful religion is invariably the threat of violence, should the "insult" not be retracted -- regardless of whether it was made by the pope, a politician or a poet.

And Wilders is guilty of breaking with yet another aspect of the prevailing consensus. He opted to act, not just react. Since announcing his film three months ago, he has been defining the course of the debate, driving his opponent away from him. Nobody would have been surprised if Wilders had ended his game by confessing that the film itself did not actually exist.

What he wanted to accomplish had already been accomplished (more...) with the threat to show an "anti-Islamic video." He showed the "free West" to be a paper tiger. The Dutch government distanced itself from the project and asked its ambassadors in Muslim countries to explain to their host governments the situation in their home country, where the government is not as omnipotent as it would like to be.

The EU, wanting to please all sides, issued a statement that emphasized the importance of freedom of speech while at the same time relativizing it: "We believe that acts such as (Geert Wilders') film serve no other purpose than inflaming hatred."

Even UN Secretary-General Ban Ki-moon chimed in to condemn the Wilders film "in the strongest terms." He said that nothing can justify hate speech or incitement to violence. "The right of free expression is not at stake here. ... Freedom must always be accompanied by social responsibility."

This is the kind of tone that one waits for in vain when Islamists call for jihad, fanatics massacre non-believers or Holocaust deniers organize conferences. The only objective of these exercises is to prevent a repetition of what happened in 2006, when a dozen harmless Muhammad caricatures caused a blaze of indignation from Jakarta to Rabat. At the time, many politicians, including the prominent German Green Party politician Claudia Roth, called for "de-escalation."

The call was not aimed at the arsonists who were burning Danish flags and destroying embassies, but at the Europeans, who were watching the jihadists in bafflement, in a bid to not pour more oil on the flames.

A similar thing happened recently in Sudan, when a British woman innocently named a teddy bear Muhammad. Or when Salman Rushdie was knighted by the British queen. Muslims were outraged and Europeans sought cover until the storm had blown over.

And now the "right-wing populist" Wilders is being sacrificed on the altar of appeasement policy. He is no cineaste, and his film is certainly no masterpiece. It is, however, a brute challenge to us to at least recognize reality.