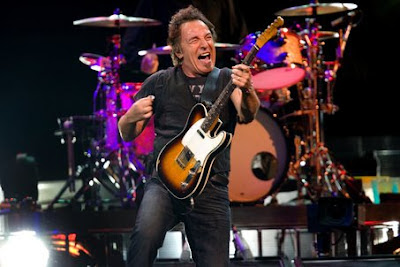 I need to think of something more interesting to say for our print edition than, "Bruce was awesome!" But, well, Bruce was awesome! Bruce Springsteen and the E Street Band played for almost two and a half hours on Friday night at the Rose Garden to an adoring crowd.

As good a time as the crowd had, though, I don't think anyone had more fun than Springsteen, who looked a lot like a big little kid up on stage, playing around with some of his best friends. (Those friends, in this case, being world-class musicians...) His encore stretched to five songs, including the inevitable "Born to Run" and, apparently off the prompting of an audience sign, an extended version of "Jungleland," and I almost expected it to go longer, so much joy did he seem to have up on the stage.

Still, whatever exuberance he showed, he kept a tight grip on the band and the show. All the band members clearly respect each other (the lineup Friday included Clarence Clemons on sax, Nils Lofgren and Steve Van Zandt on guitar, Max Weinberg on drums, Garry Talent on bass, Roy Bittan on piano, Soozie Tyrell on violin and Charlie Giordano on organ, subbing for Danny Federici, who's being treated for melanoma. Patti Scialfa, who's also married to Springsteen, stayed home with the couple's three kids. With three teenagers, Springsteen noted, the fort needs to be defended), but Bruce was just as clearly the leader, signaling the transitions from song to song -- a major feat, considering how often the band didn't so much stop between songs as take the briefest of pauses.

The band's set drew heavily on their 2007 album, "Magic." They played the title track, "Radio Nowhere," "Livin' in the Future," "Gypsy Biker," "Girls in Their Summer Clothes," "Last to Die," "Devil's Arcade," and the gorgeously longing "Long Walk Home." But they played a lot of old favorites, as well, such as "Badlands," "Prove it All Night," and, during the encore, "Dancing in the Dark."

Springsteen being Springsteen, politics of course made an appearance. Besides plugs for the Oregon Food Bank and Growing Gardens, he also made clear his feelings for the current administration, noting in his intro to "Magic" that the country's approaching the end of 8 years of magic tricks. For those unfamiliar with the song's lyrics, it's about a con man, a charlatan, who professes to be a magician but is ultimately a thief of dear things.

But that was only a small part of the show. Really, those two and a half hours were about music, about a band that's endured for decades, and about a musician whose powerful voice remains undiminished despite the years. 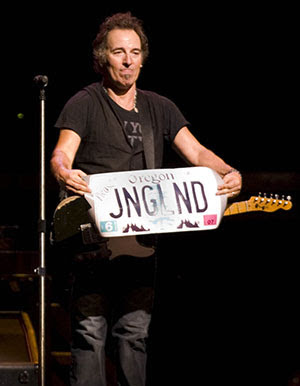 Setlist:
Night
Radio Nowhere
Lonesome Day
Gypsy Biker
Magic
Reason to Believe
Candy's Room
Prove It All Night
She's the One
Livin' in the Future
The Promised Land
For You
Lost in the Flood
Devil's Arcade
The Rising
Last to Die
Long Walk Home
Badlands
* * *
Girls in Their Summer Clothes
Jungleland
Born to Run
Dancing in the Dark
American Land
Posted by jtf at 11:06 AM