Small in stature, Rizzuto was a Yankee giant 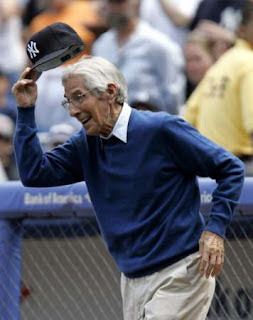 New York Yankees old timer Phil Rizzuto tips his cap to the crowd as he is introduced during the team's 59th annual Old Timer's Day ceremonies before their game with the Cleveland Indians at Yankee Stadium in New York in this July 9, 2005 file photograph.

NEW YORK -- After his broadcasting career had ended – on those occasional days when he'd risk the traffic again on the George Washington Bridge – Phil Rizzuto would arrive at Yankee Stadium and search for the shortstop.

Once they found each other, Rizzuto would embrace the Yankees' captain, his head landing in the center of Jeter's chest.

Jeter always had been struck with how this small-in-stature man could have been such a giant in the game.

"It goes to show, you don't have to be big size-wise to be successful," Jeter said. "He played with a lot of heart."

On the day that heart stopped beating, the Yankees filled the Stadium with tribute to the 5-foot-6, Hall of Fame shortstop and longtime broadcaster whose passing was mourned deeply, but whose name instantly brought a smile – and a story – with each mention Tuesday.

A wreath was placed on the plaque in Monument Park for ''The Scooter,'' who died late Monday night at age 89. Rizzuto's plaque in Cooperstown was similarly adorned, and the Yankees took the field wearing Rizzuto's No. 10 on their left uniform sleeve, above the black armband in honor of Cory Lidle.

The No. 10 was painted behind each foul line, and legendary public address announcer Bob Sheppard concluded a moment of silence by saying, "Scooter, we shall miss you. May God bless you and may you rest in peace."

The crowd gave another respectful cheer again after a video tribute to Rizzuto's career.

"He always found his way to me when he came around," Jeter said. "I grew up listening to him on TV." 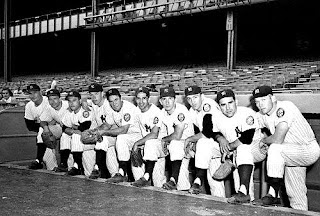 It was during a WPIX broadcast when Rizzuto dubbed lanky lefty Ron Guidry as "Louisiana Lightning.''

Now the Yankees' pitching coach, Guidry would often joke with Rizzuto about the autograph seekers who wanted him to sign that nickname instead of "Gator,'' which was only five letters.

"I'd tell him, 'Go sit at a desk and write Louisiana Lightning 100 times and see if you don't get aggravated,' '' Guidry said.

Seated next to manager Joe Torre in the home dugout, Yogi Berra recalled how Rizzuto would swap his teammates' shoes on train rides as a prank, but who leaped in fear when a dead mouse would appear in his glove as retribution.

"They said he was too small to be in the big leagues," said Berra, who first met Rizzuto at age 17 and later made Rizzuto godfather to his son, Larry.

A World War II veteran, Rizzuto would often crack that he was "the worst sailor who ever sailed," and that he was seasick every day.

And yet, he was a fearless 150-pounder at shortstop "in a day when people came after you at second base," bench coach Don Mattingly said.

As a smallish shortstop himself, third base coach Larry Bowa recalled how his father invoked the names of Rizzuto, Pee Wee Reese and Luis Aparacio as role models.

"He didn't have the gaudy numbers," Bowa said. "But he did the little things that won ballgames, that won championships."

And Bowa joked that Rizzuto – an artistic bunter – must have been frustrated watching players fail to get sacrifices down over the past few years. Mattingly recalled Rizzuto's days in spring training, teaching bunting skills to young players.

But by then, "people probably remembered him as an announcer more than they do as a player," Mattingly said of Rizzuto's famous "Holy Cow!" phrase, and his fondness for leaving games early to beat the bridge traffic back to New Jersey.

"Because they heard his voice every day," Mattingly said, Rizzuto became a part of everyone's home.

"Every now and then, he'd start rambling about something else," Guidry said. "Two innings had passed, but you didn't care. You wanted to see how [the story] was going to come out and you forgot about the game."

Besides his enthusiastic on-air birthday wishes and occasional slip-ups, "he rooted for his team," Torre said. "Which was unheard of in New York. You weren't supposed to do that."

But he wasn't supposed to be in the big leagues at all, according to men like Casey Stengel, who rejected a 16-year-old Rizzuto in a tryout with the Dodgers. Then the manager of the Brooklyn Dodgers, Stengel famously told Rizzuto to grab a shoebox.

And Rizzuto never let Stengel forget it during a career in which the Scooter played on 10 pennant winners, won the 1950 AL MVP and earned the 1951 World Series MVP.

'A man's size is measured by his heart," reads Rizzuto's plaque in Monument Park, dedicated the day his number was retired by the Yankees on Aug. 4, 1985. 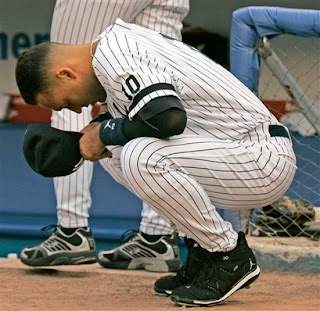 Jeter was reminded how Rizzuto was unabashed in his admiration. In Jeter's office, there's a personally inscribed framed photo of the two men from 1999. And there was the night in 2001, when Rizzuto threw out the first ball of a World Series game by mimicking Jeter's famous "flip" play.

"You always remember the people who treated you well coming up," Jeter said. "For him to say what he thought of me as a player and a person, I'll always remember." 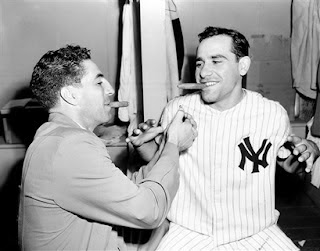 New York Yankees catcher Yogi Berra, right, accepts a light from Yankees shortstop Phil Rizzuto after Berra handed out cigars to celebrate the birth of his son in the Yankees clubhouse in New York, in this Sept. 25, 1951 file photo.
* * *
HIGHLIGHTS

1936 -- Signed by Yankees scout Paul Krichell out of Richmond Hill High School after being rejected by Giants and Dodgers (Casey Stengel delivered the bad news in Brooklyn) because they considered him too small.
1939 -- Nicknamed "Scooter" by Kansas City teammate Billy Hitchcock.
1940 -- Hit .347 for Yankees' Class AAA Kansas City club.
1941 -- Made major league team in spring training and hit .307.
1942 -- Batted .381 with eight hits to lead all players in World Series loss to St. Louis Cardinals.
1943-45 -- Served in the Navy during World War II.
1950 -- Collected 200 hits and named AL MVP.
1951 -- Squeeze bunt against Cleveland's Bob Lemon in Sept. 17 game scored Joe DiMaggio with winning run to put Yankees in first place for good.
1956 -- Released by Yankees in August to make room on roster for outfielder Enos Slaughter, obtained from the St. Louis Cardinals.
1957 -- Joined Yankees broadcasting crew of Mel Allen and Red Barber.
Sources: New York Yankees, The Record archives
Posted by jtf at 9:55 AM