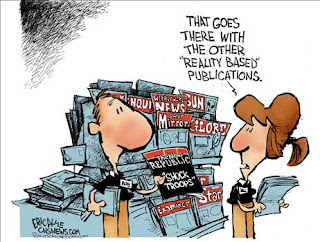 Something rather odd happened the other day. If you go to NASA's Web site and look at the "U.S. surface air temperature" rankings for the lower 48 states, you might notice that something has changed.

Then again, you might not. They're not issuing any press releases about it. But they have quietly revised their All-Time Hit Parade for U.S. temperatures. The "hottest year on record" is no longer 1998, but 1934. Another alleged swelterer, the year 2001, has now dropped out of the Top 10 altogether, and most of the rest of the 21st century – 2000, 2002, 2003, 2004 – plummeted even lower down the Hot 100. In fact, every supposedly hot year from the Nineties and this decade has had its temperature rating reduced. Four of America's Top 10 hottest years turn out to be from the 1930s, that notorious decade when we all drove around in huge SUVs with the air-conditioning on full-blast. If climate change is, as Al Gore says, the most important issue anyone's ever faced in the history of anything ever, then Franklin Roosevelt didn't have a word to say about it.

And yet we survived.

So why is 1998 no longer America's record-breaker? Because a very diligent fellow named Steve McIntyre of climateaudit.com labored long and hard to prove there was a bug in NASA's handling of the raw data. He then notified the scientists responsible and received an acknowledgment that the mistake was an "oversight" that would be corrected in the next "data refresh." The reply was almost as cool as the revised chart listings.

Who is this man who understands American climate data so much better than NASA? Well, he's not even American: He's Canadian. Just another immigrant doing the jobs Americans won't do, even when they're federal public servants with unlimited budgets? No. Mr. McIntyre lives in Toronto. But the data smelled wrong to him, he found the error, and NASA has now corrected its findings – albeit without the fanfare that accompanied the hottest-year-on-record hysteria of almost a decade ago. Sunlight may be the best disinfectant, but, when it comes to global warming, the experts prefer to stick the thermometer where the sun don't shine.

One is tempted to explain the error with old the computer expert's cry: That's not a bug, it's a feature. To maintain public hysteria, it's necessary for the warm-mongers to be able to demonstrate that something is happening now. Or as the Fort Worth Star-Telegram put it at the end of 1998:

"It's December, and you're still mowing the lawn. You can't put up the Christmas lights because you're afraid the sweat pouring off your face will short out the connections. Your honeysuckle vines are blooming. Mosquitoes are hovering at your back door.

"Hot enough for you?"

It's not the same if you replace "Hot enough for you?" with "Yes, it's time to relive sepia-hued memories from grandpa's Dust Bowl childhood."

Yet the fakery wouldn't be so effective if there weren't so many takers for it. Why is that?

In my book ("America Alone"), still available at all good bookstores (you can find it propping up the wonky rear leg of the display table for Al Gore's "An Inconvenient Truth"), I try to answer this question by way of some celebrated remarks by the acclaimed British novelist Margaret Drabble, speaking just after the liberation of Iraq. Ms Drabble said:

"I detest Coca-Cola, I detest burgers, I detest sentimental and violent Hollywood movies that tell lies about history. I detest American imperialism, American infantilism, and American triumphalism about victories it didn't even win."

That's an interesting list of grievances. If you lived in Poland in the 1930s, you weren't worried about the Soviets' taste in soft drinks or sentimental Third Reich pop culture. If Washington were a conventional great power, the intellectual class would be arguing that the United States is a threat to France or India or Chad or some such. But because it's the world's first nonimperial superpower the world has had to concoct a thesis that America is a threat not merely to this or that nation state but to the entire planet, and not because of conventional great-power designs but because – even scarier – of its "consumption," its very way of life. Those Cokes and cheeseburgers detested by discriminating London novelists are devastating the planet in ways that straightforward genocidal conquerors like Hitler and Stalin could only have dreamed of. The construct of this fantasy is very revealing about how unthreatening America is.

And, when the cheeseburger imperialists are roused to real if somewhat fitful warmongering, that's no reason for the self-loathing to stop. The New Republic recently published a "Baghdad Diary" by one "Scott Thomas," who turned out to be Pvt. Scott Thomas Beauchamp. It featured three anecdotes of American soldiering: the deliberate killing of domestic dogs by the driver of a Bradley Fighting Vehicle; a child's skull worn by a U.S. serviceman as a fashion accessory; and the public abuse of a woman to her face, a half-melted face disfigured by an IED. In that last anecdote, the abusive soldier was the author himself, citing it as evidence of how the Iraq war has degraded and dehumanized everyone.

According to the Weekly Standard, army investigators say Pvt. Beauchamp has now signed a statement recanting his lurid anecdotes. And even the New Republic's editors concede the IED-victim mockery took place in Kuwait, before Pvt. Beauchamp ever got to Iraq.

They don't seem to realize this destroys the entire premise of the piece, which is meant to be about the dehumanization of soldiers in combat. Pvt. Beauchamp came pre-dehumanized. Indeed, he was writing Iraq atrocity fantasies on his blog back in Germany. It might be truer to say he was "dehumanized" by American media coverage. In this, he joins an ever lengthening list of peddlers of fake atrocities, such as Jesse MacBeth, an Army Ranger who claimed to have slaughtered hundreds of civilians in a mosque. He turned out to be neither an Army Ranger nor a mass murderer.

There are many honorable reasons to oppose the Iraq war, but believing that our troops are sick monsters is not one of them. The sickness is the willingness of so many citizens of the most benign hegemon in history to believe they must be.

As Pogo said, way back in the 1971 Earth Day edition of a then-famous comic strip, "We have met the enemy, and he is us." Even when we don't do anything: In the post-imperial age, powerful nations no longer have to invade and kill. Simply by driving a Chevy Suburban, we can make the oceans rise and wipe the distant Maldive Islands off the face of the Earth. This is a kind of malignant narcissism so ingrained it's now taught in our grade schools. Which may be why, even when the New Republic's diarist goes to Iraq and meets the real enemy, he still assumes it's us.
Posted by jtf at 8:14 AM