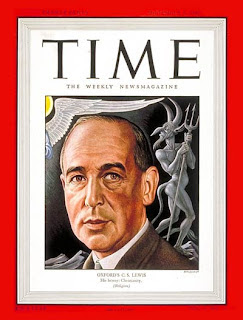 A gift for writing, a fateful motorcycle ride, and a fascination with joy made C.S. Lewis into the writer we still love today.

In later life, C. S. Lewis - "Jack" to friends and family - would say that it all began with a toy garden. He was seven years old when his older brother, who was known by his nickname "Warnie," brought to their playroom a biscuit tin he had decorated with tiny twigs, moss, and flowers. As Jack gazed at the miniature fairyland he was seized with wonder. The beauty was compelling and mysterious, even mystical, and before he could grasp exactly what it conjured in his spirit the sensation flashed away. This great inexpressible desire, even a desire for desiring, became the touchstone of Lewis' life. He called it Joy. Fifty years would pass before Lewis, childless himself, would complete the enduring classic of children's literature known as the Chronicles of Narnia. The initial volume, "The Lion, the Witch, and the Wardrobe," will no doubt find a whole new generation of readers when the movie version is released in December. But this one slim novel is only a tiny sample of Lewis' prodigious, and often profound, work.

Lewis's large, stolid face filled the cover of Time magazine on September 8, 1947. The article described Lewis as "a short, thickset man with a ruddy face and a big voice." An Oxford don at the time (he later moved on to Cambridge), Lewis was hearty and unaffected, and savored his hours talking and arguing with friends over pipes and pints of ale. It isn't the image, the Time reporter said, that we associate with "a best-selling author and one of the most influential spokesmen for Christianity in the English-speaking world."

Lewis began teaching at Oxford in 1925, with a special emphasis on medieval literature. He was, at the time, an atheist. His mother had died of cancer when he was only nine, shattering his trust in God's goodness. By the age of 14, Lewis had rejected faith in any kind of God, and his horrific experience during World War I (in which he was wounded) only confirmed these convictions. Yet his immersion in European literature repeatedly confronted him with the fact that the writers he most admired were Christian. By 1929, Lewis felt compelled to adopt a cautious theism. In his 1955 autobiography, "Surprised by Joy" (there's that term again), Lewis described himself at this point as "the most dejected and reluctant convert in all of England."

J.R.R. Tolkien, author of the "Lord of the Rings" trilogy, was to take a decisive role in the next step of Lewis' conversion. On a fall evening in 1931, Lewis had dinner with fellow professors Tolkien and Hugo Dyson. They walked through the college's park, talking, until the early hours of the morning. The conversation turned to mythology. Lewis felt that myths, despite their imaginative appeal, were, in the end, merely lies. Tolkien proposed instead that the beauty of Christianity is that it is a myth that happens to be true. The universal hunger planted in human beings by God, evidenced by all the world's mythologies, was made manifest in time and space. In Jesus Christ, God really did walk this earth, die, and rise again.

A few days after that late-night walk, Lewis, still pondering the conversation, got into the sidecar of Warnie's motorcycle for a trip to the zoo. He later wrote, "When we set out I did not believe that Jesus is the Son of God, and when we reached the zoo I did." It was a distinctly intellectual conversion, a laser-like search for Truth, unaccompanied by emotional tumult. Yet it seems somehow characteristic of Lewis-never one to stand on dignity--that it took place in a sidecar on the way to the zoo.

Lewis could be jolly. He had a hearty appreciation of good food and drink, and his writings often pause to linger over detailed description of a meal. He was able to laugh at himself, as when describing his dilemma on finding he'd left the house with mismatched shoes, and was unable to sufficiently scuff the new shoe to resemble the old one.

Yet he could be grave when the subject required it. Lewis took God seriously and himself lightly. His extraordinary mind mined deep levels of theology, but never as isolated theoretical study; whatever he wrote was grounded in honesty about his own life. This combination of profound thought, good humor, practical application, humility, and a knack for clear English communication, is what has made C. S. Lewis the most beloved of contemporary Christian authors.

This winning combination was evident in Lewis' first major success, "The Screwtape Letters" (1942), a series of letters from a supervisory devil to an underling on how to corrupt a "patient." Lewis met each Thursday night with Tolkien and other Christian writers in a circle called the "Inklings," where members read and discussed works in progress. (Dorothy Sayers was another good friend). The potential of fantasy and what they called "scientifiction" to carry theological ideas was being tested out. Lewis wrote a "space trilogy," concluding with the disturbing, dystopic "That Hideous Strength" in 1945.

During World War II, Lewis was invited to deliver dozens of talks over the BBC in his deep, reassuring voice. Some of these later made up the volume "Mere Christianity," the most popular of Lewis' nonfiction works, and likely the most popular summary of Christian faith in print today, with sales in the multiple millions. In 1950, Lewis began the Narnia series with "The Lion, the Witch, and the Wardrobe."

About this time Lewis' life took an unexpected turn: he was surprised, quite literally, by Joy. Her full name was Joy Davidman Gresham. She was an American; she was a poet; and she was becoming a Christian, having previously been a secular Jew and Marxist. Theological exploration led Joy to Lewis' books, and then to correspond with him directly. Joy had a husband and two sons, but the marriage was troubled; in 1954, she would divorce William Gresham for desertion.

On September 24, 1952, Lewis met Joy for lunch in Oxford. She had a brilliant, agile mind, and a boldness not typical of British women of the time. Joy moved to London, then to Oxford, and then found that her visa could not be extended. She and Lewis agreed on what he called a "technical" marriage, in order to convey citizenship. Lewis told his friends it was the gentlemanly thing to do. They weren't fully persuaded. Warnie suspected that Jack was fooling himself about his true feelings for Joy; Tolkien, a devout Roman Catholic, thought it wrong to marry a divorced person in any case. In April, 1956, the pair had a swift civil ceremony at the registry office, and continued to live apart.

Six months later Joy was diagnosed with cancer. This stunning blow forced into the open the bond that was growing between them. A priest was called to Joy's hospital bedside, and the couple were united by the rites of the Anglican Church. When Joy left the hospital, she came home to Lewis' house.

The couple asked a priest they knew, who was reputed to have a gift of healing, to pray for Joy. After that she entered a period of remission that both thought miraculous, and they enjoyed four vibrant years of marriage. "I never expected to have in my 60s that happiness that passed me by in my 20s," Lewis wrote; he and Joy "feasted on love." During this time Lewis gave talks which were collected into another of his landmark books, "The Four Loves." It presents four aspects of human love, and the eloquent chapter on Eros clearly draws from joyous experience.

It would not last. On July 13, 1960, the resurgent cancer took Joy's life. Lewis was stricken and, giving way to a storm of emotion, penned "A Grief Observed." While he continued to believe in God, he doubted God's goodness, just as he had as a motherless child. Perhaps we are at the mercy of "a Cosmic Sadist," he wrote.

In the remaining years of his life, however, Lewis broke through grief to a tranquil faith, and reached new depths of spiritual insightC. S. Lewis died on November 22, 1963, slipping away unobserved in the tumult over the assassination of John F. Kennedy the same day. He left a legacy of dozens of books: poetry, criticism, theology, fiction, essays, and letters. While the movie, "The Lion, the Witch, and the Wardrobe" presents a delightful story on its own, it will also likely serve as a doorway to the works of one of the twentieth century's most intelligent, able, and appealing Christians. The man who gave us Narnia gave us so much more.