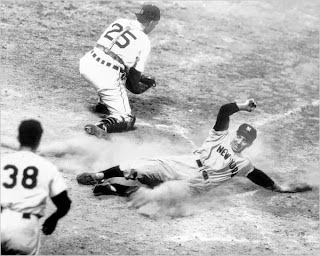 Rizzuto, sliding safely into home against the Detroit Tigers in 1949, was only 5 feet, 6 inches tall and 150 pounds. “I hustled and got on base and made the double play,” he said of his role with the Yankees.

Phil Rizzuto represented the triumph of the spirit in baseball.
He was the little Scooter who could. He was only 5-foot-6, but he became a fixture at shortstop on some of the greatest New York Yankees teams of all time. He became a Most Valuable Player in 1950, and eventually, a Hall of Famer.

His death saddens everyone who ever knew of his career. But that career will remain as a reminder of what could be accomplished through determination and relentless hustle.

He was not a promising physical specimen. Rizzuto described himself, by saying, "I'm short all over, but my legs are very short." One of his classic recollections was of a tryout with the Brooklyn Dodgers in 1937. As Rizzuto told it, then Dodgers manager Casey Stengel "took one look and me and ... he said, 'Listen, kid, you better go and get yourself a shoeshine box. That is the only way you'll make a living.' "

In the height of irony, Stengel was the manager of the Yankees when Rizzuto's career was at its peak. 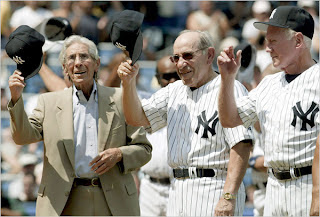 From left, Rizzuto, Yogi Berra and Whitey Ford on Old-Timers Day at Yankee Stadium in 2004.

Rizzuto was a superlative defensive shortstop and that, combined with an exceptional offensive year in 1950 (.324 average, 125 runs, 36 doubles), won him the MVP. While he was obviously not going to hit for considerable power, his ability to make consistent contact and his wonderful touch on bunts kept him batting at or near the top of the order for years.

He was an integral part of the Yankees' success, playing on nine World Series teams, seven World Series champions, from 1941 until 1955, with three seasons spent in the military during World War II.

He was an indispensable part of Yankee teams that dominated an entire era. That sort of thing says more about his worth as a player than any number can. He played with style and effervescence and joy, but he was also a winner.

As a popular player and a Brooklyn native, Rizzuto was ideally placed to continue with the Yankees in the broadcast booth after his playing career ended. He was not exactly Vin Scully in the booth, but he was spirited. Everyone who has spent more than 10 minutes with baseball has heard a recording in which Phil Rizzuto shouts "Holy cow!" on the occasion of an exceptional play.

He was so big as a broadcaster that he went, although unintentionally, cross-cultural. Rizzuto was featured on Meat Loaf's "Paradise by the Dashboard Light" epic. Although Rizzuto had no idea of the song's salacious subject matter when he recorded his portion of it, and the whole episode eventually embarrassed him, his appearance on that hit record was a type of a tribute to his standing. When the rocker wanted a baseball broadcaster to perform on his song, he went to one of the genre's most recognizable voices and styles.

In the end, Phil Rizzuto will be remembered, especially by Yankees fans -- but also by all baseball fans -- as someone who embodied the qualities of will and perseverance, and someone who played and broadcast the game with a pure, unvarnished joy.

The little guy who was supposed to earn a living with a shoeshine box instead became a Yankees fixture, a Yankees legend, and a Hall of Famer. He went from unlikely to stardom in a truly singular career. Phil Rizzuto will always be part of the game.

Mike Bauman is a national columnist for MLB.com. This story was not subject to the approval of Major League Baseball or its clubs.
Posted by jtf at 6:41 PM