On the long walk from his dressing room to the Las Vegas stage, Elvis Presley would often stop. He'd close his eyes and begin singing a gospel song, and soon his backup singers would join him. "Let's have a little prayer," he'd say afterward.

This is one of the stories Joe Moscheo, a member of Presley's backup group, the Imperials, recalls in his new book about Presley, "The Gospel Side of Elvis" (Center Street, $19.99, 224 pages). The book, with a foreword by Priscilla Presley, has been published on the 30th anniversary of the King's death. 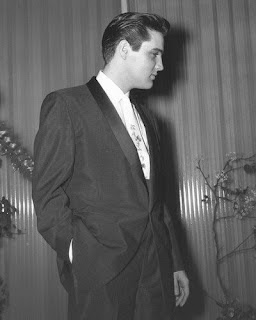 "There are hundreds of books on him, but no one has written that gospel music was really a big part of his life and a big part of who he was," says Moscheo, on the phone from his home in Nashville, Tenn. "His fans should know this if they want a complete picture of the man."

How much did the music mean to Presley?

"He was a great student of gospel music. ... He was addicted to it," Moscheo says.

Presley was so knowledgeable about the genre that he knew the lyrics to obscure gospel songs, memorized arrangements by different groups and could name members of various bands, according to Moscheo.

Priscilla Presley says she and her former husband watched Sunday morning worship services on TV every week. "Elvis made sure he had my undivided attention as he would go through every performance," she writes.

Many probably don't think of religion when they think of Presley, but Moscheo says that his faith was a big part of his life.

"We've all heard about the other side and all his failings," Moscheo says. "I'm not saying they didn't exist ... but the man I knew was a deeply religious man."

Presley first heard the music growing up when he and his mother attended an Assembly of God Church. He liked the music so much that at one point Presley wanted to be a gospel singer, and he tried out for a group called the Songfellows in 1954, according to Moscheo.

"He had a different destiny," Moscheo says.

Even when Presley became a huge star, he never left gospel. He was no longer able to attend church -- it created a disturbance when he did -- but he kept up on the latest in the gospel world. He attended the National Gospel Convention, where he acted like any fan.

"Elvis introduced me to all those he was influenced by and those he admired," writes his former wife.

Presley's favorite gospel songs were "Sing Sweet, Sweet Spirit," "How Great Thou Art" and "He Touched Me," Moscheo says.

Presley won three Grammy Awards for his gospel recordings, the only Grammys he ever won. In 1999, he was inducted posthumously into the Gospel Music Hall of Fame.

The author says Presley often turned to these songs to cope. "He was a very lonely person, he lived a fast life, but when everything got to be too much he'd go back to what his mother taught him and what he learned at church," says Moscheo. "And that was gospel music."

But toward the end of his life, not even this music was enough, and the author describes watching Presley's downward spiral. "It saddens me to this day," he writes.

It was only fitting, he says, that gospel music was played at Presley's funeral, Moscheo says. "It was the music he loved the most."