Phil Rizzuto, the sure-handed Hall of Fame Yankees shortstop nicknamed The Scooter, who punctuated his extended Yankee life as a broadcaster with birthday wishes to nuns and exclamations of “Holy cow!” died today. He was 89. 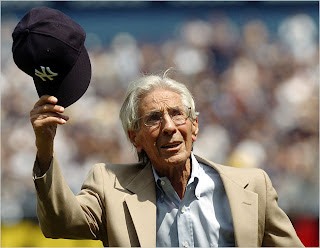 Phil Rizzuto at the 2004 Old-Timers’ Day ceremonies at Yankee Stadium.

His death was confirmed by the Yankees.

Rizzuto played for the Yankees from 1941 to 1956. His departure was abrupt. No longer willing to carry an aging, seldom-used infielder, the team cut him on Old-Timers’ Day. Soon after, he began calling Yankee games for WPIX-TV/Channel 11 and did not leave that role until 1996.

Rizzuto played an integral role on the dynastic Yankees before and after World War II. He was a masterly bunter and defensive specialist for teams that steamrolled to 10 American League pennants and nine World Series championships. He was one of 12 Yankees on teams that swept to five consecutive World Series triumphs, from 1949 to 1953.

He was a 5-foot-6-inch, 150-pound sparkplug who did the little things right, from turning the pivot on a double play to laying down a perfect sacrifice bunt. He left the slugging to powerful teammates like Joe DiMaggio, Mickey Mantle, Tommy Henrich, Charlie Keller and Yogi Berra.

“I hustled and got on base and made the double play,” he said of his role. “That’s all the Yankees needed in those days.”

His career statistics were not spectacular: a batting average of .273, 38 home runs and 562 runs batted in. But in his best season, 1950, when he hit a career-high .324 and drove in 66 runs, he won the American League’s Most Valuable Player award.

Rizzuto was frequently compared with other shortstops of his era, among them Pee Wee Reese of the Brooklyn Dodgers and Marty Marion of the St. Louis Cardinals. But to DiMaggio, his teammate for eight seasons — each man lost three seasons to military service during World War II — Rizzuto was the best.

“The little guy in front of me,” said DiMaggio, one of the game’s great centerfielders. “He made my job easy. I didn’t have to pick up so many ground balls.”

A major league career was not foreordained. One of five children of Rose and Philip Rizzuto Sr., a construction foreman and trolley motorman, Fiero Francis Rizzuto was born and grew up in Brooklyn and later in the Glendale neighborhood of Queens, where the family moved when he was 12. 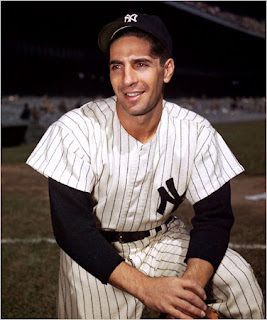 While attending Richmond Hill High School, he tried out for the Brooklyn Dodgers, but the team’s manager, Casey Stengel, told him he was too small. The New York Giants told him to get lost. But Stengel’s rejection — “Go get a shoeshine box,” the manager told him — was the most vivid.

“When he became the Yankee manager in 1949, I reminded him of that, but he pretended he didn’t remember,” Rizzuto said of Stengel. “By ’49, I didn’t need a shoebox, anyway. The clubhouse boy at the Stadium shined my Yankee spikes every day.”

The Yankees signed him in 1937 and sent him to their Class D minor league team in Bassett, Va. Stopping for a meal in Richmond, Rizzuto was served grits for the first time.

“I didn’t know what to do with them, so I put them in my pocket,” he said in the hyperbolic style that would later make the New York Post sportswriter Milton Gross describe him as “a storyteller of Munchausen proportions.”

A mistreated left leg injury during his stint in Virginia — he had stepped in a gopher hole — nearly led to amputation; or maybe it didn’t, depending on how Rizzuto told the tale. “They had to cut part of the muscle out of my leg because it was infested with gangrene,” he said, “and actually that was a break for me because I used to be so fast when I was a kid, I’d run by the ground balls, and this slowed me just enough so that I could make the ball.”

His appearance at spring training with the Yankees in 1941 made the pitcher Lefty Gomez wonder why the team had summoned a “Lilliputian,” but Rizzuto established himself after a rocky start, replaced the veteran Frank Crosetti and hit .307 in his rookie season.

In addition to becoming a bulwark of the Yankees’ infield, forming superior double-play combinations with second basemen Gerry Priddy, Joe Gordon and Jerry Coleman (who in the 1960’s would join Rizzuto in the broadcast booth), Rizzuto developed into an eccentric — funny, superstitious, afraid of thunder and the target of pranks.

When the tradition was for fielders to leave their gloves in the field when they came in to bat, Rizzuto would often return to the field to find a mouse, a snake or a rat wedged in the glove fingers.

In the first, Rizzuto was at bat against Bob Lemon of the Cleveland Indians. With DiMaggio on third base, Rizzuto took Lemon’s first pitch and argued the called strike with the umpire. That gave him time to grab his bat from both ends, the sign to DiMaggio that a squeeze play was on for the next pitch. But DiMaggio broke early, surprising Rizzuto. With Joltin’ Joe bearing down on him, Rizzuto laid down a bunt on a pitch that Lemon threw at his head.

“If I didn’t bunt, the pitch would’ve hit me right in the head,” Rizzuto said. “I bunted it with both feet off the ground, but I got it off toward first base.”

DiMaggio scored the winning run, and Lemon angrily hurled the ball at the press box. Stengel called it “the greatest play I ever saw.”

Later that year, an incident during Game 3 of the World Series against the New York Giants provided Rizzuto with an enemy he could fulminate about for the rest of his life.

With one out in the fifth inning, the Giants’ Eddie Stanky drew a walk against the Yankees’ pitcher, Vic Raschi. The next batter was Alvin Dark, and the Yankees intercepted a hit-and-run sign to him. Berra, the catcher, signaled a pitchout, and his throw to Rizzuto at second base beat Stanky by 10 feet. But as Rizzuto waited with the ball in his glove, Stanky slid and kicked the ball into center field with his right foot. He ran to third. Rizzuto was charged with an error, and the Giants scored five unearned runs.

“I was nonchalanting it,” Rizzuto admitted sheepishly. “I was looking at the TV camera.”

Rizzuto was shocked when the Yankees released him in 1956 to sign the outfielder Enos Slaughter. But he soon accepted a job in the Yankee radio and TV booth with Mel Allen and Red Barber, two towering figures in sportscasting. “You’ll never last,” Howard Cosell, then a radio sportscaster, told him. “You look like George Burns and you sound like Groucho Marx.”

Three days into his new career, Rizzuto told his wife, Cora, that he wanted to quit — but he stayed, despite periodic threats to resign, until 1996. To those who heard him exclaim “Holy cow!” for a play (or a cannoli) that excited him, or chide a player as a “huckleberry” for committing an error, Rizzuto was a beloved, idiosyncratic voice despite his lack of professional credentials.

Rizzuto met Cora Ellenborg in 1942, after substituting for DiMaggio as a speaker at a communion breakfast in Newark. He had been invited to her home afterward for coffee and cake by her father, a Newark fire chief. “I fell in love so hard I didn’t go home,” Rizzuto recalled. He rented a hotel room nearby for a month to be near her.

Mrs. Rizzuto survives him, as do their daughters, Patricia, Cynthia and Penny; a son, Phil Jr., and two grandchildren.

Over four decades in the Yankee announcing booth, he transformed himself from a conventional announcer with a distinctly New York voice into a comic presence whose broadcasts often diverged from actual game-calling.

The first thing he asked Mel Allen was whether he could use the phrase “Holy cow!” Years later, Harry Caray, another singular baseball announcer, asked Rizzuto to stop using the expression. Rizzuto refused, saying he had adopted it in high school at his baseball coach’s suggestion to replace profanity with cleaner words.

When the Yankees celebrated him with a day in his honor in 1985, retiring his uniform No. 10, the team presented him with a cow, which promptly stepped on his foot.

Rizzuto’s game commentary vied for time with anniversary wishes and confirmation congratulations. He never used the first names of his partners at WPIX-TV — they were “Coleman,” “Murcer,” “White,” “Messer,” “Seaver,” or “Cerone,” never Jerry, Bobby, Bill, Frank, Tom or Rick. Listeners heard about his wife (he called her “my bride”), an employment appeal for his son, Scooter Jr., reports about his golf game or exultations about a new Italian dish.

Rizzuto’s ramblings and pro-Yankee sentiments maddened detractors, who felt he paid too little attention to the game. But fans adored Rizzuto as they would a delightful uncle, and colleagues were fond of recalling his scorecard notation of “W.W.,” for “Wasn’t Watching.”

Rizzuto often left a game at Yankee Stadium before its conclusion to beat the traffic over the George Washington Bridge. As one game headed into extra innings, he asked Messer, “Want a cup of coffee?” Messer nodded. But Rizzuto was gone, to his home in New Jersey. As he entered the broadcast booth the next day, Rizzuto tapped Messer on the shoulder and said, “Here’s your coffee.”

Rizzuto’s playing credentials failed to get him elected to baseball’s Hall of Fame in Cooperstown, N.Y., for many years. “I’ll take any way to get in,” he joked. “If they want a batboy, I’ll go in as a batboy.”

But in 1994, he was voted in by the Hall’s Veterans Committee, which reconsiders candidates rejected by writers. Friends like Yogi Berra, Bill White and Pee Wee Reese sat on the committee.

Rizzuto resigned from Channel 11 abruptly in August 1995, distraught that he had remained to broadcast a game at Fenway Park rather than join former teammates at Mickey Mantle’s funeral in Dallas. Watching the services on television from the booth, he said: “I took it hard and knew I made a big mistake. I got more upset as the game went on and left in the fifth. They tried to drag me back, but I wouldn’t.”

But he returned in 1996 for a final season, persuaded by fans, Mantle’s sons and George M. Steinbrenner III, the principal owner of the Yankees.

Through his final season, Rizzuto remained true to his style. Discussing a late-night rerun of “Seinfeld,” he called it “the first time since my honeymoon that I’ve gone to sleep with a smile on my face.” At his Hall of Fame induction, he explained the anatomical roots for his brand of commentary.“My bride again told me that the reason I got in so much trouble: ‘When you get a thought, it’s supposed to travel through your brain. You got a little trap door back here and then you say, “Should I or shouldn’t I?” O.K., and you drop the thing.’

“She says my trap door is open constantly, so whatever I say could come out before I can think about it.”
Posted by jtf at 1:33 PM