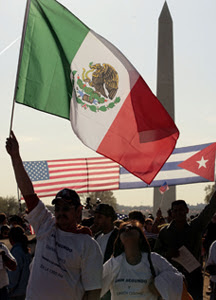 Monday's column from the Administration's Karl Zinsmeister and Edward Lazear ("Lead Weight or Gold Mine: What are the True Costs of Immigration?" June 25, RCP) is a study in misdirection and misstatement. Since they devote much of their piece to attacking my research, I'd like to set the record straight.

Let's start with a brief review of what my research into the fiscal cost of low-skill households has actually found:

* Low-skill immigrants receive, on average, three dollars in government benefits for each dollar of taxes paid. This imbalance generates a net cost of $89 billion per year on U.S. taxpayers. Over a lifetime the typical low-skill immigrant household costs taxpayers $1.2 million dollars.

* Immigrants are disproportionately low-skilled. One-third of all immigrants and more than half (50 to 60 percent) of illegal immigrants lack a high school degree.

* In contrast to low- and moderate-skill immigrants, immigrants with college education will pay more in taxes than they receive in benefits.

Future taxpayer costs will only rise under policies that increase the number of low-skill immigrants entering the U.S., their length of stay in the country, or their access to government benefits and services. Unfortunately, this is exactly what the Senate immigration bill does. The cost of amnesty alone will reach $2.6 trillion once the recipients reach retirement age.

To defend this exorbitantly expensive legislation, Zinsmeister and Lazear must resort to inaccurate or misleading assertions. For example, they claim that, under the Senate immigration bill, amnesty recipients will receive little or no welfare.

While the Senate bill would delay most amnesty recipients' access to welfare until some 10 to 13 years after enactment, any of their children born here would have immediate access to all welfare programs, guaranteed for a lifetime.

Moreover, the initial limitation on receipt of means-tested welfare will have only a small effect on governmental costs. The average adult amnesty recipient can be expected to live more than 50 years after receiving his Z visa. Most, then will be fully eligible for welfare during the last 35 to 40 years of their lives. And use of welfare during these years will be heavy.

Zinsmeister and Lazear argue that amnesty recipients must earn access to welfare "the old fashioned way," as if that creates some great protection for taxpayers. Unfortunately, low-skill immigrant families who access the welfare system "the old fashioned way" receive, on average, $10, 500 per year in means-tested welfare benefits, a half-million dollars over a lifetime.

Suggesting that amnesty recipients will be net tax contributors, Zinsmeister and Lazear go so far as to claim they will actually increase the revenue available to support Social Security and Medicare. But this is true for high-skill immigrants only. The majority of those who would receive amnesty are low-skill workers, and another 25 percent have only a high school degree. Experience shows that these immigrant groups will be a net burden to taxpayers over the entire course of their lives.

That reality destroys the authors' suggestion that amnesty will help keep Social Security afloat. In the not too distant future, the Social Security trust fund will be in deficit. Government will have to use general revenues to help pay promised benefits. Since amnesty recipients and their families will consume more government revenues that they contribute, they will undermine the financial support for U.S. retirees even before they reach retirement age themselves.

Zinsmeister and Lazear claim the Senate bill will "sharply improve" the fiscal balance sheet by switching to a merit-based system that will increase the proportion of high-skilled workers among future immigrants.

But the merit system is actually designed to confer citizenship on low-skill "temporary guest workers" rather than bring professionals from abroad. The point system for selecting green card holders is far from merit-based. For example, green card applicants get lots of points if they are working in "high demand" occupations, which include janitor, waitress, sales clerk, fast food worker, freight handler, laborer, grounds keeper, food preparation worker, maid, and house cleaner. With a recommendation from her employer, a high school dropout working in a McDonald's will outscore an applicant with a Ph.D. trying to enter the country from abroad.

Nor do the authors mention that the bill will triple the annual rate of family-chain migration to 440,000 annually, bringing in up to 5.9 million over the next decade. Family-chain immigrants are predominately low-skilled: 60 percent have only a high school degree or less; 38 percent lack a high school degree.

The column falsely asserts that "low-skill immigrants are actually comparatively self-sufficient compared to low skill native households." Actually, wages, tax payments, and reliance on welfare are quite similar for the two groups. Low-skill non-immigrants differ from immigrants primarily because they are more likely to be elderly and therefore less likely to be employed.

The authors accurately note that the children of low-skill immigrants do better than their parents. With higher education levels, they will receive fewer welfare benefits and pay more in taxes. But despite this progress, the children of immigrant dropouts will remain a net drain on taxpayers.

Why so? Because the educational attainments of low-skill immigrants' offspring aren't as elevated as Zinsmeister and Lazear imply. They correctly trumpet that the "children of immigrant parents are 12 percent more likely to obtain a college degree than other natives."
They fail to note that the relevant group, children of low-skill immigrants, have below average educational attainments. For example, the children of Hispanic dropout parents are three times more likely to drop out of high school, and 75 percent less likely to have a college degree, than the general population.

The descendents of immigrant dropouts do not become net tax contributors until the third generation. This means that the net fiscal impact of low-skill immigrants will remain negative for 50 to 60 years after their arrival in the U.S.

The main fiscal impact of S.1348 occurs through (1) the grant of amnesty, which gives 12 million predominantly low-skilled, illegal immigrants access to Social Security, Medicare and welfare benefits, and (2) a dramatic increase in chain immigration, also dominated by the low-skilled.
Zinsmeister's and Lazear's talk about tax-generating, college-educated immigrants is a red herring, designed to obscure the obvious fiscal consequences of the legislation. Touting "merit-based" provisions that assure only a steady flow of "high tech" waitresses, janitors and fast food workers reveals how indefensible the bill actually is.

High-school dropouts are extremely expensive. It doesn't matter whether they come from Ohio, Tennessee or Mexico. It does matter that the Senate immigration bill would increase the flow of poorly educated immigrants into the U.S. and give millions of poorly educated aliens already here access to government benefits. The bill for U.S. taxpayers will be gargantuan.

Robert Rector is a Senior Research Fellow at The Heritage Foundation.
Posted by jtf at 8:00 PM