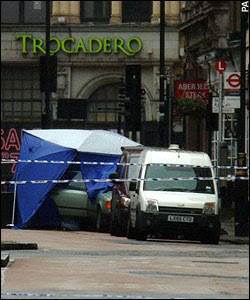 The car bomb was parked near Piccadilly Circus.

The failed attempt to bomb a London nightclub shows that Islamic terror groups not only continue to pose a serious threat to our national security, but retain the ability to carry out attacks that will attract maximum publicity.

The July 7 attacks on London’s transportation system in 2005 were timed to coincide with former Labour prime minister Tony Blair hosting the G8 summit of world leaders at Gleneagles in Scotland.

The wave of suicide bomb attacks killed 52 people and injured hundreds more, and forced Mr Blair to break off his talks on important issues such as climate change and African debt relief to return to London to oversee the government’s security response.

This latest bomb plot, which bears the terror imprint of an al-Qa’eda operation, was clearly timed to coincide with Gordon Brown’s appointment as Britain’s new prime minister this week. During the ten years he previously spent as Chancellor of the Exchequer Mr Brown kept a low profile on issues relating to Islamic terrorism and the global war against terrorism.

If the car bomb, which was placed outside one of London’s most popular nightclubs, had successfully detonated it would have caused widespread devastation and loss of life, and would have forced Mr Brown to demonstrate whether he has the strength of character and leadership qualities that are required when the country suffers a major terrorist attack.

Even though British security officials were able to defuse the device before it caused widespread carnage in London’s West End, the incident has brought home to Mr Brown and his new government the very real threat militant Islamic groups continue to pose both to the capital and the country at large.

Although Scotland Yard are being reticent about the likely identity of the terror group responsible for plotting the attack, the crude nature of the explosive device - made of gas cylinders and nails - is typical of the type of device used on an almost daily basis in Iraq by Islamic terror groups.
Posted by jtf at 11:20 AM