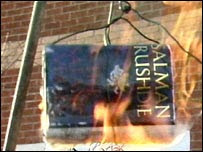 A year or so after the Ayatollah Khomeini took out an Islamist mob contract on Salman Rushdie in 1989, the novelist appeared, after elaborate security arrangements, on a television arts show in London. His host was Melvyn Bragg, a longtime British telly grandee, and what was striking was how quickly the interview settled down into the usual cozy, literary chit-chat. Lord Bragg took Rushdie back to his earlier pre-fatwa work. "After your first book," drawled Bragg, "which was not particularly well-received."

That's supposed to be the worst a novelist has to endure. His book will be "not particularly well-received" – i.e., some twerp reviewers will be snotty about it in the New Yorker and the Guardian. In the cozy world of English letters, it came as a surprise to find that being "not particularly well-received" meant foreign governments putting a bounty on your head and killing your publishers and translators. Even then, the literary set had difficulty taking it literally. After news footage of British Muslims burning Rushdie's book in the streets of English cities, BBC arts bores sat around on talk-show sofas deploring the "symbolism" of this attack on "ideas."

There was nothing symbolic about it. They burned the book because they couldn't burn Rushdie himself. If his wife and kid had swung by, they'd have gladly burned them, just as the mob was happy to burn to death 37 Turks who'd made the mistake of being in the same hotel in Sivas as one of the novelist's translators. When British Muslims called for Rushdie to be killed, they meant it. From a mosque in Yorkshire, Mohammed Siddiqui wrote to the Independent to endorse the fatwa by citing Sura 5, verses 33-34, from the Quran:

"The punishment of those who wage war against God and His Apostle, and strive with might and main for mischief through the land, is execution, or crucifixion, or the cutting off of hands and feet from opposite sides, or exile from the land." 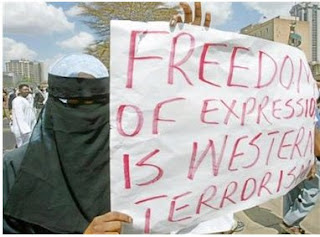 Britain got so many things wrong during the Rushdie affair, just as America got so many things wrong during the Iranian embassy siege 10 years earlier. But it's now 2007 – almost two decades after Iran claimed sovereignty over British subjects (Rushdie), almost three decades after they claimed sovereignty over American territory (the U.S. Embassy in Tehran). So what have we learned? I was with various British parliamentarians the other day, and we were talking about the scenes from Islamabad, Pakistan, where the usual death-to-the-Great-Satan chaps had burned an effigy of the queen to protest the knighthood she'd conferred on Rushdie.

I told my London friends that I had to hand it to Tony Blair's advisers: What easier way for the toothless old British lion, after the humiliations inflicted upon the Royal Navy sailors by their Iranian kidnappers, to show you're still a player than by knighting Salman Rushdie for his "services to literature"? Given that his principal service to literature has been to introduce the word "fatwa" to the English language, one assumed that some characteristically cynical British civil servant had waved the knighthood through as a relatively cheap way of flipping the finger to the mullahs.

But no. It seems Her Majesty's Government was taken entirely by surprise by the scenes of burning Union Jacks on the evening news.

Can that really be true? In a typically incompetent response, Margaret Beckett, the foreign secretary, issued one of those "obviously we're sorry if there's been a misunderstanding" statements in which she managed to imply that Rushdie had been honored as a representative of the Muslim community. He's not. He's an ex-Muslim. He's a representative of the Muslim community's willingness to kill you for trying to leave the Muslim community. But, locked into obsolescent multicultural identity-groupthink, Mrs. Beckett instinctively saw Rushdie as a member of a quaintly exotic minority rather than as a free-born individual.

This is where we came in two decades ago. We should have learned something by now. In the Muslim world, artistic criticism can be fatal. In 1992, the poet Sadiq Abd al-Karim Milalla also found that his work was "not particularly well-received": he was beheaded by the Saudis for suggesting Muhammad cooked up the Quran by himself. In 1998, the Algerian singer Lounès Matoub described himself as "ni Arabe ni musulman" (neither Arab nor Muslim) and shortly thereafter found himself neither alive nor well. These are not famous men. They don't stand around on Oscar night, congratulating themselves on their "courage" for speaking out against Bush-Rove fascism. But, if we can't do much about freedom of expression in Iran and Saudi Arabia, we could at least do our bit to stop Saudi-Iranian standards embedding themselves in the West.

So many of our problems with Iran today arise from not doing anything about our problems with Iran yesterday. Men like Ayatollah Khomeini despised pan-Arab nationalists like Nasser who attempted to impose a local variant of Marxism on the Muslim world. Khomeini figured: Why import the false ideologies of a failing civilization? Doesn't it make more sense to export Islamism to the dying West?

And, for a guy dismissed by most of us as crazy, Khomeini made a lot of sense. The Rushdie fatwa established the ground rules: The side that means it gets away with it. Mobs marched through Britain calling for the murder of a British subject – and, as a matter of policy on the grounds of multicultural sensitivity, the British police shrugged and looked the other way.

One reader in England recalled one demonstration at which he asked a constable why the "Muslim community leaders" weren't being arrested for incitement to murder. The officer told him to "f--- off, or I'll arrest you." Genuine "moderate Muslims" were cowed into silence, and pseudo-moderate Muslims triangulated with artful evasiveness. Sir Iqbal Sacranie, who went on to become leader of the most prominent British Muslim lobby group, mused about the Rushdie fatwa: "Death is perhaps too easy."

In 1989 Salman Rushdie went into hiding under the protection of the British police. A decade later he decided he did not wish to live his life like that and emerged from seclusion to live a more or less normal life. He learned the biggest lesson of all – how easy it is to be forced into the shadows. That's what's happening in the free world incrementally every day, with every itsy-bitsy nothing concession to groups who take offense at everything and demand the right to kill you for every offense. Across two decades, what happened to Rushdie has metastasized, in part because of the weak response in those first months. "Death is perhaps too easy"? Maybe. But slow societal suicide is easier still.
Posted by jtf at 2:40 PM