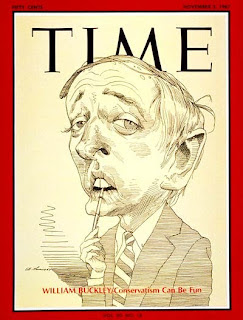 What would the world be like if there had been no William F. Buckley?

I can well recall even as a high schooler that Republicans were considered Midwestern stolid reactionaries with no ideas except to oppose generosity and kindness. I can well recall when being a conservative meant being without ideas and simply in opposition to those who had ideas. Or if conservatives had any ideas, they were just that them who had should continue to have and those who had not should rot.

He said these things when the powers that be laughed at him. He said these things when the Revolution came (I have always thought George Wallace played an immense part in that Revolution, but then that's just me) and Americans started to realize that they, like the man who had been speaking prose all his life, really were a lot closer to Buckley's ideas of God and man than to Galbraith's. He spoke principles of human dignity, human service before the Almighty, respect for law, respect for life, and he was not afraid to speak them to whoever was running the show, Republican or Democrat.

When Democrats did the kowtow to the Soviets, Buckley was not afraid to say so. When Republicans did the same kowtow to wage price controls, he was also unafraid.

The amazing thing is that Buckley had these great ideas from Burke and Hamilton and Jefferson, and then, like a one man band traveling around the country in a bi-plane, he showed up at any county fair or cow college or Ivy League sanctum sanctorum where he could find a room, and talk and talk and talk. Always unafraid, never wearying.

He preached the human soul, exalted by freedom but always under God, and he preached it on TV for decades, in lecture halls. In his columns, in his books, in his commentaries, he never shut up about how pressing was the need for freedom. And thank God for it.

Like the late immortal Milton Friedman, he would never give up. He brought the often infantile, feuding, neurotics of the conservative movement together and lashed them into their finest work. And he always did it as a gentleman. And still somehow he sailed around the world, skied like a champion, was a stellar father and husband, and always came back for more.

Buckley made conservatism intellectually respectable, resilient, even sexy. He let us know that if James Bond could vote, he would vote Tory. (The old Tory, not the new, pro-Palestinian Tory.)

I am thinking all these thoughts because I am once again browsing through John Coyne and Linda Bridges' masterful Strictly Right, about Buckley and the whole conservative movement. I keep thinking that if we have a free republic instead of a socialist people's republic, credit first goes to our fighting men and women who offered up their lives. But right up there are the men and women who realized it was a battle of ideas, were not afraid to fight it, never retreated, and gave us the legacy of freedom.

The old saw used to be, "If you can read this, thank a teacher."

The more basic truth would be, "If you woke up in a free society today, spare a thought for William F. Buckley, a patriot and a founding father of freedom for all his life." There never was a truer friend to the human spirit. Long may he wave and never waver.

Ben Stein is a writer, actor, economist, and lawyer living in Beverly Hills and Malibu. He also writes "Ben Stein's Diary" for every issue of The American Spectator's monthly print edition. Click here to subscribe.