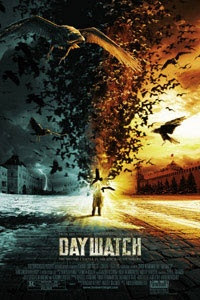 There's no need for any more movies about vampires, shape-shifters and a battle between the forces of "darkness" and the forces of "light." Not after Day Watch, the sequel to Night Watch. The Russians have that subject covered. And how.

Set in a snowy (in most scenes) modern-day Moscow, Day Watch is pretty much the ultimate Dark vs. Light combat movie. 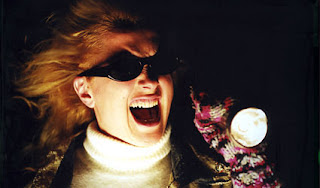 Like Night Watch before it, it is about the real Cold War - Apocalypse Any Day Now.

A centuries-long peace between supernatural villains and super-natural-ish heroes is coming to an end, all because a weak man visited a witch to curse his ex-wife 12 years ago, leading to his son's birth and cross to the Dark Side.

Now, Anton (Konstantin Khabensky) chain smokes and rides the mean streets in the utility trucks of the Night Watch, donning sunglasses to see the hellish "Gloom" that the Dark Others inhabit.

The Dark Others are allegedly also watching the Light Others during their Day Watch, giving the whole movie a mutually-assured-destruction, East-vs.-West veneer.

Anton is training the fetching Sveta, played by Mariya Poroshina, a striking Catherine Deneuve-blond. He is to handle her with kid gloves. She may be the Great Other, whatever that is.

The villainous Zavulon is trying to set Anton up to take the fall for breaking the peace. Alisa (Zhanna Friske), a Day Watcher, is in Zavulon's thrall, but she smells a rat in the murders of a couple of Dark Others.

If only Anton can find this "Chalk of Fate" that the great warrior Tamerlane *once possessed, chalk that allows you to rewrite the past to fix the present. 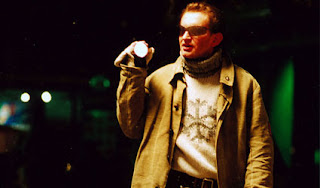 Sergey Lukyanenko's source novel is a Tolkienesque font of arcane names and nomenclature, which the movies give us in head-popping detail.

But director Timur Bekmambetov balances all that mumbo jumbo with eye-popping visuals, dazzling us with imagery, from the Medieval battles of Tamerlane and frenetic car stunts (up the sides of buildings) of today to the very end of Moscow as we know it.

It's a deliriously playful film, with droll Russian one-liners and a body-switching man-woman bit that seems to exist for no other reason than to promise hot girl-on-girl action in a shower.

Even the printed subtitles (it's in Russian, save for a prologue) are jokey - melting like snow, dripping as blood down a wall, shattering, all to mimic the words they're translating or action they're in the midst of.

The acting is gritty, grim and resolute, with the women, in particular, standing out. Galina Tyunina, as Olga, a woman who takes on Anton's body and has to keep her cool while Sveta confesses her love for Anton to her, is particularly good.

The effects aren't Hollywood-sharp and the continuity isn't all it could be - sunny, bare street days morph into overcast snowy afternoons. 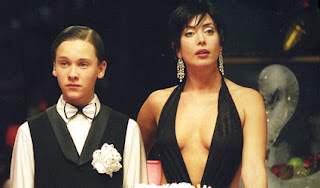 But as Tamerlane's horsemen thunder across snowy steppes, trucks face off in epic games of chicken and Moscow's landmarks are assaulted by silver tinsel yo-yos (don't ask), you have to acknowledge the demented genius of this enterprise, certainly the biggest thing to come out of Russian film since the Soviet era.

Maybe they didn't invent the vampire movie. In the old days, the commissars would have insisted that they did. But thanks to Night Watch and now Day Watch, the Russians certainly have the last word in it.
Posted by jtf at 2:56 PM