A farewell fit for fans 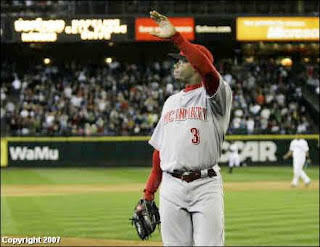 Ken Griffey Jr. waves goodbye to fans as he leaves the field after the eighth inning of Sunday's Reds-Mariners game at Seattle's Safeco Field.

Sunday, the fans who littered the stands in Reds jerseys and Mariners caps finally got their desired outcome, as Ken Griffey Jr. hit two home runs and the Mariners beat the Reds 3-2 in the finale of Griffey's three-game return to Seattle, where he began his Hall of Fame career.

"Jay (Buhner) actually called today's game - he said on (Thursday), 'Knowing your luck, you're going to hit a couple of home runs and lose 3-2,'" Griffey said. "(The series) was everything I thought it would be and more."

The game followed one of the familiar scripts for the Reds, as the team had several chances to blow the game open early, but failed to capitalize and allowed the other team to do just enough to pull out the victory.

Reds starter Bronson Arroyo pitched as well as he has all season, but allowed two runs in the sixth and another in the seventh and the Reds' offense could only muster Griffey's two home runs.

"It comes down to not getting a run in early when he had a chance," Reds manager Jerry Narron said. "I would have liked to have won the ball game with Griffey having the game he had."

Griffey's solo homers came with two outs in the first and fifth innings. The Reds left runners in scoring position in the second, third, sixth and eighth innings.

Cincinnati's best shot at taking the lead came in the third when following a single by Griffey, Adam Dunn came up with runners on first and third and one out and struck out. Dunn has struck out 27 times with runners in scoring position this season - nine times have been with fewer than two outs. After Dunn went down swinging, Mariners starter Miguel Batista hit Edwin Encarnacion to load the bases, but Josh Hamilton popped up to the second baseman to end the inning. Catcher David Ross stranded runners on first and third in the second and sixth innings.

In a similar situation - two on, two outs - Mariner right fielder Ben Broussard doubled two runs in to tie the game in the sixth.

"I've faced him a lot and I've had pretty good success against him," Arroyo said. "(With the count at) 3-2 I only had two choices, a breaking ball down the middle or a cutter in on his hands, and I threw the heater in there and he hit it well and tied the game." 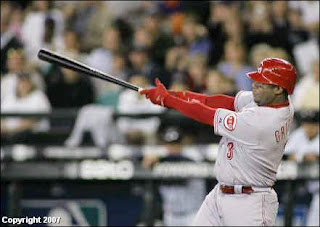 The Mariners used a suicide squeeze by left fielder Willie Bloomquist to take the lead in the seventh before Arroyo got out of a bases-loaded jam.

Dunn led off the eighth inning with a single, but following a Juan Castro sacrifice bunt, the tying run was stranded at second.

With his 55th career multi-homer game, Griffey moved ahead of Dunn for second place in the National League with 21 home runs. In the first inning, Griffey tied Mark McGwire for seventh on the all-time home run list with 583. He then passed him in the fifth inning.

"It was just one of those things that happen, you play long enough and hit a few out, you catch people," Griffey said.

Up next is former Red Frank Robinson, who is sixth all-time with 586 home runs.

Not too many people, Griffey included, realized he had tied McGwire in the first inning. With two outs, he sent Batista's 2-0 offering to left-center field and Bloomquist ran into the wall and appeared to catch it. Griffey stood between first and second to try to figure out what happened.

There was no confusion about the second homer, when Griffey sent Batista's first-pitch fastball 428 feet to right field off the advertising sign in the second deck of Safeco Field.

Griffey's heroics weren't limited to the batter's box. Although he was initially penciled in as the Reds' designated hitter, he asked Narron if he could play the field for the fans of Seattle. Narron obliged, scratching Norris Hopper from the lineup and inserting Javier Valentin as the DH.

In the second inning, Griffey made a back-handed sliding catch on Adrian Beltre's blooper into right and was able to double up Broussard at first.

Griffey also ended the eighth inning with a routine catch on a fly ball from Yuniesky Betancourt. As he jogged off the field, Griffey received his final standing ovation.

With the Reds trailing and Griffey's spot in the order six spots away, both Griffey and the Seattle fans knew it was probably the last step he'd take on this trip to Seattle. Griffey stopped short of the dugout, waved and tipped his cap to the sellout crowd of 46,064. All three games were sellouts.

"I turned around and waved, just my way of saying thank you for coming out and supporting me," Griffey said. "It was every inning that I ran out there, but they probably knew it was my last time coming out. I wish it could be like that all the time."

Even though the Mariners took the series, the entire three days belonged to Griffey. Every at-bat, every catch, every move was cheered by the Seattle fans and Griffey seemed truly moved by the response.

"It was a lot of fun," Griffey said. "A lot of great memories, a lot of family I haven't had a chance to see in a while, a lot of familiar faces. I've always thought I'd be back. I didn't know when, I'm just glad the people of Seattle welcomed me like this."
Posted by jtf at 4:13 PM