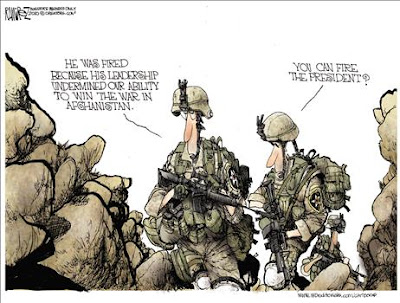 And President Obama had cause to cashier them. Yet his decision to fire McChrystal may prove both unwise and costly.

For McChrystal, unlike Gen. MacArthur, never challenged the war policy -- he is carrying it out -- and Barack Obama is no Harry Truman.

Moreover, the war strategy Obama is pursuing is the McChrystal Plan, devised by the general and being implemented by the general in Marja and Kandahar, perhaps the decisive campaign of the war.

Should that plan now fail, full responsibility falls on Obama.

He has made the Afghan war his war in a way it never was before.

If the McChrystal strategy fails, critics will charge Obama with causing the defeat by firing the best fighting general in the Army out of pique over some officers-club remarks that bruised the egos of West Wing warriors.

And though those remarks never should have appeared in print, they may well reflect the sentiments of not a few soldiers and Marine officers on third and fourth tours of duty in the Afghan theater.

Had Obama, instead of firing McChrystal, told him to shut up, can the interviews and go back to fighting the war until the December review of strategy, he could have shown those soldiers he is a bigger man than they or McChrystal's team give him credit for.

And if success in Afghanistan is the highest goal, how does it help to fire the best fighting general? Do you relieve Gen. Patton during combat because he vents his prejudices or opinions?

This city may draw the parallel, but the Obama-McChrystal clash does not remotely rise to the historic level of the collision between MacArthur and Truman.

Truman had dropped atomic bombs on Hiroshima and Nagasaki, ordered the airlift that broke the Berlin blockade, and produced the Marshall Plan and NATO. He had won election in his own right with a legendary comeback in 1948.

Obama has nothing like Truman's credibility as a war leader.

And MacArthur was the most famous U.S. soldier since Gen. Grant. No. 1 at West Point, he was a legendary commander in France in 1918, leading troops out of the trenches with a swagger stick.

Driven out of the Philippines in 1942, he had declared, "I shall return," and led the liberation of the islands in 1944. He conducted the famous island-hopping campaign up the archipelagos of the South Pacific and took Japan's surrender on the battleship Missouri in Tokyo Bay.

As military proconsul, he presided over the reconstruction of Japan, wrote her constitution and converted her into an ally.

When North Korea invaded the South and drove the U.S. Army into the Pusan perimeter, MacArthur landed Marines far behind enemy lines at Inchon in a flanking maneuver that destroyed the North Korean army and will be studied at military academies for centuries to come.

In late 1950, MacArthur was stunned by the intervention in Korea of the armies of Mao Zedong, lately victorious in China's four-year civil war.

MacArthur's clash with Truman was not over something so trivial as a gossipy article in Rolling Stone. MacArthur's hands had been tied by Truman.

MacArthur was being restricted to fighting the war Mao wanted to fight, a war of attrition against the world's most populous nation, and largest army, while China was allowed to remain a privileged sanctuary, off-limits to U.S. bombers like those that smashed Germany and Japan.

In his address to Congress, after his firing by Truman, MacArthur put it this way: "'Why,' my soldiers asked of me, 'surrender military advantages to an enemy in the field?' I could not answer."

MacArthur's letter to Rep. Joe Martin, in response to a letter from the GOP leader, was indeed a challenge to Truman's policy of avoiding any risk of a clash with Russia, even if it meant U.S. soldiers would pay the price of Truman's timidity.

Truman's restrictions would ensure a "no-win war" for two more years that would cost tens of thousands more American lives, and Harry would be sent packing with the lowest rating of any president in history.

Obama and his party may be celebrating his cashiering of Gen. McChrystal as a macho moment, but by firing the fighting general, for his foolish remarks, Obama has deepened the gulf between his party and the U.S. military.


Mr. Buchanan is a nationally syndicated columnist and author of "Churchill, Hitler, and The Unnecessary War: How Britain Lost Its Empire and the West Lost the World", "The Death of the West,", "The Great Betrayal," "A Republic, Not an Empire" and "Where the Right Went Wrong."
Posted by jtf at 6:58 AM