Ken Salazar Gets a Kick in the You-Know-What 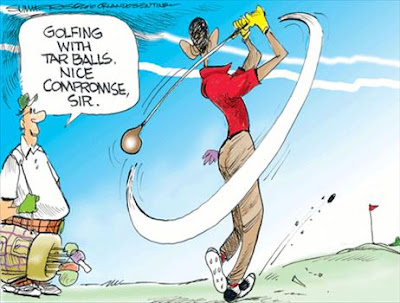 For all his John Wayne rhetoric on the BP oil spill, President Obama has failed to administer a swift kick to the ample, deserving rump of Interior Secretary Ken Salazar. No matter: Federal judge Martin Feldman has now done the job the White House won’t do.

In a scathing ruling issued Tuesday afternoon, New Orleans–based Feldman overturned the administration’s radical six-month moratorium on deepwater drilling — and he singled out Salazar’s central role in jury-rigging a federal panel’s scientific report to bolster flagrantly politicized conclusions. In a sane world, Salazar’s head would roll. In Obama’s world, he gets immunity.

The suit challenging Obama’s desperately political ban was filed by Louisiana rig company Hornbeck Offshore Services, which sued on behalf of all the “small people” in the industry whose economic survival is at stake. As the plaintiffs’ lawyer argued in court, the overbroad ban promised to be more devastating to Gulf workers than the spill itself. “This is an unprecedented industry-wide shutdown. Never before has the government done this,” attorney Carl Rosenblum said.

Scientists who served on the committee expressed outrage upon discovering earlier this month that Salazar had — unilaterally and without warning — inserted a blanket drilling-ban recommendation into their report. As Feldman recounted in his ruling:

Much to the government’s discomfort and this Court’s uneasiness, the Summary also states that “the recommendations contained in this report have been peer-reviewed by seven experts identified by the National Academy of Engineering.” As the plaintiffs, and the experts themselves, pointedly observe, this statement was misleading. The experts charge it was a “misrepresentation.” It was factually incorrect.

Allow me to be more injudicious: Salazar lied. Salazar committed fraud. Salazar sullied the reputations of the experts involved and abused his authority.

And for what purpose? To exploit the Gulf crisis, appease the eco-extremists, and stymie the economic recovery to which the Obama White House pays oily lip service.

The scientists whose views were misrepresented reportedly received an apology from the evidence-doctoring Salazar, but where are the consequences? Where is the accountability? Terrific news: Salazar, the report-rigger, is in charge of overseeing it. That’s right. The Teflon Interior Secretary spent Monday afternoon swearing in another bureaucrat, litigator Michael Bromwich, who will head the newly named “Bureau of Ocean Energy Management, Regulation and Enforcement” (formerly the beleaguered Minerals Management Service).

According to Salazar, Bromwich “will be a key part of our team as we continue to change the way the Department of the Interior does business.” Present company exempted, of course.

Feldman soberly illuminated the way the Department of the Interior does business in concluding that Salazar’s “invalid agency decision to suspend drilling of wells in depths of over 500 feet simply cannot justify the immeasurable effect on the plaintiffs, the local economy, the Gulf region and the critical present-day aspect of the availability of domestic energy in this country.” Salazar, with his boss’s blessing, imposed the blanket moratorium on Hornbeck and 33 permitted rigs without a shred of threat/safety analysis. Of course, Hope and Change have always been implemented with Arbitrary and Capricious power.

The White House immediately announced plans to appeal the ruling. But for once, Chicago-on-the-Potomac has run smack into the rule of law and lost. For all the other small people over whom the Obama administration has run roughshod, let’s hope it sets a lasting precedent.

— Michelle Malkin is the author of Culture of Corruption: Obama and His Team of Tax Cheats, Crooks & Cronies. © 2010 Creators Syndicate, Inc.
Posted by jtf at 12:50 PM