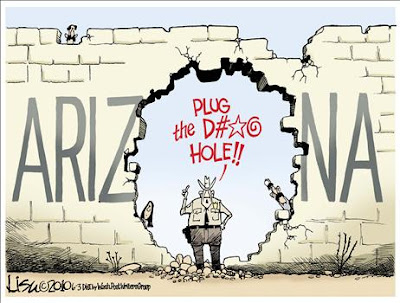 The Obama administration has a lot of fights on its hands. Putting aside real wars in Afghanistan and Iraq, there's the battle against leaking oil in the Gulf, the struggle against 9.7 percent unemployment across the country, and clashes over the president's agenda on Capitol Hill. Despite all that, the White House has found time to issue a new declaration of war, this time against an unlikely enemy: the state of Arizona.

The Justice Department is preparing to sue Arizona over its new immigration law. The president has stiffed Gov. Jan Brewer's call for meaningful assistance in efforts to secure the border. And the White House has accused Arizona's junior senator, Republican Jon Kyl, of lying about an Oval Office discussion with the president over comprehensive immigration reform. Put them all together, and you have an ugly state of affairs that's getting uglier by the day.

First, the lawsuit. Last week, Brewer was appalled to learn the Justice Department's intentions not from the Justice Department but from an interview done by Secretary of State Hillary Clinton with an Ecuadorian TV outlet. "It would seem to me that if they were going to file suit against us," Brewer told Fox News' Greta van Susteren last week, "they definitely would have contacted us first and informed us before they informed citizens ... of another nation."

"There certainly seems to be an underlying disrespect for the state of Arizona," says Kris Kobach, the law professor and former Bush administration Justice Department official who helped draft the Arizona law. Kobach points out that during the Bush years, several states openly flouted federal immigration law on issues like sanctuary cities and in-state tuition for illegal immigrants. Respecting the doctrines of comity and federalism, the Bush administration didn't sue. Now, when Arizona passes a measure that is fully consistent with federal law, the Obama administration, says Kobach, "goes sprinting to the courthouse door."

Then there is the matter of the White House's assistance, or nonassistance, in Arizona's border-security efforts. On June 3, the president, under criticism for refusing to meet or even talk to Brewer, reluctantly granted her an audience in the Oval Office. After the meeting, Brewer told reporters Obama pledged that administration officials would come to Arizona within two weeks with details of plans to secure the border.

June 17 marked two weeks, and there were no administration officials and no plans. There still aren't. "What a disappointment," Brewer told van Susteren. "You know, when you hear from the president of the United States and he gives you a commitment, you would think that they would stand up and stand by their word. It is totally disappointing."

And now, there's the Kyl controversy. On June 18, Kyl told a town meeting in North Phoenix that Obama personally told him the administration will not secure the U.S.-Mexico border because doing so would make it politically difficult to pass comprehensive immigration reform. "I met with the president in the Oval Office, just the two of us," Kyl said. "Here's what the president said. The problem is, he said, if we secure the border, then you all won't have any reason to support comprehensive immigration reform."

"In other words," Kyl continued, "they're holding it hostage. They don't want to secure the border unless and until it is combined with comprehensive immigration reform."

After Kyl's statement went viral on the Internet, the White House issued a sharp denial. "The president didn't say that and Senator Kyl knows it," communications director Dan Pfeiffer wrote on the White House blog. "There are more resources dedicated toward border security today than ever before, but, as the president has made clear, truly securing the border will require a comprehensive solution to our broken immigration system."

Kyl is not backing down. "What I said occurred, did occur," he told an Arizona radio station. "Some spokesman down at the White House said no, that isn't what happened at all, and then proceeded to say we need comprehensive immigration reform to secure the border. That is their position, and all I was doing was explaining why, from a conversation with the president, why it appears that that's their position."

Even if it didn't have so many other fights on its hands, it would be unusual for an administration to align itself against an American state. But that's precisely what has happened. Soon it will be up to the courts and voters to decide whether Obama's campaign against Arizona will succeed or fail.

Byron York, The Examiner's chief political correspondent, can be contacted at byork@washingtonexaminer.com. His column appears on Tuesday and Friday, and his stories and blog posts appears on ExaminerPolitics.com
Posted by jtf at 7:24 AM