Torrents of uninteresting mail inundate members of Congress, but occasionally there are riveting communications, such as a recent e-mail from a noncommissioned officer (NCO) serving in Afghanistan. He explains why the rules of engagement for U.S. troops are "too prohibitive for coalition forces to achieve sustained tactical successes."

Receiving mortar fire during an overnight mission, his unit called for a 155mm howitzer illumination round to be fired to reveal the enemy's location. The request was rejected "on the grounds that it may cause collateral damage." The NCO says that the only thing that comes down from an illumination round is a canister, and the likelihood of it hitting someone or something was akin to that of being struck by lightning.

Returning from a mission, his unit took casualties from an improvised explosive device that the unit knew had been placed no more than an hour earlier. "There were villagers laughing at the U.S. casualties" and "two suspicious individuals were seen fleeing the scene and entering a home." U.S. forces "are no longer allowed to search homes without Afghan National Security Forces personnel present." But when his unit asked Afghan police to search the house, the police refused on the grounds that the people in the house "are good people." 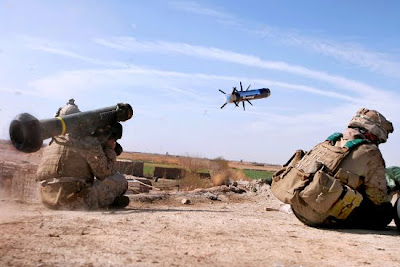 A US Marine fires a Javelin anti-armor missile at a Taliban position on the outskirts of Marja, Afghanistan. The Marines, assigned to Charlie Company, 1st Battalion, 3rd Marine Regiment, are supporting Operation Moshtarak to clear Taliban fighters from the city. US Marine Corps photo by Corporal. Andres Escatel.
(http://www.longwarjournal.org/)

On another mission, some Afghan adults ran off with their children immediately before the NCO's unit came under heavy small-arms fire and rocket-propelled grenades (RPGs), and the unit asked for artillery fire on the enemy position. The response was a question: Where is the nearest civilian structure? "Judging distances," the NCO writes dryly, "can be difficult when bullets and RPGs are flying over your head." When the artillery support was denied because of fear of collateral damage, the unit asked for a "smoke mission" -- like an illumination round; only the canister falls to earth -- "to conceal our movement as we planned to flank and destroy the enemy." This request was granted -- but because of fear of collateral damage, the round was deliberately fired one kilometer off the requested site, making "the smoke mission useless and leaving us to fend for ourselves."

Counterinsurgency doctrine says that success turns on winning the "hearts and minds" of the population, hence rules of engagement that reduce risks to the population but increase those of U.S. combatants. C.J. Chivers of the New York Times [1], reporting from Marja, Afghanistan, says "many firefights these days are strictly rifle and machine gun fights," which "has made engagement times noticeably longer, driving up the troops' risks and amplifying a perception that Marja, fought with less fire support than what was available to American units in other hotly contested areas, is mired in blood."

The value of any particular counterinsurgency must be weighed against the risks implicit in the required tactics. The U.S. mission in Afghanistan involves trying to extend the power, over many people who fear it, of a corrupt government produced by a corrupted election. This gives rise to surreal strategies. The Wall Street Journal [2] recently reported U.S. attempts "to persuade [President Hamid] Karzai to act more presidential by giving him more responsibility for operations inside his country." Think about that.

Ann Marlowe, a visiting fellow of the Hudson Institute who has been embedded with U.S. forces in Afghanistan six times, says there have been successes at the local and even provincial levels "but nothing that has lasted even a year." And the election fraud last August that secured Karzai another five-year term was symptomatic: His "government has become more egregiously corrupt and incompetent in the last three or four years." Last month Marlowe reported: "The Pentagon's map of Afghanistan's 80 most key districts shows only five 'sympathetic' to the Afghan government -- and none supporting it." She suggests that Karzai might believe that President Obama's announced intention to begin withdrawing U.S. troops next summer "is a bluff." Those Americans who say that Afghanistan is a test of America's "staying power" are saying that we must stay there because we are there. This is steady work, but it treats perseverance as a virtue regardless of context or consequences and makes futility into a reason for persevering.

Obama has counted on his 2011 run-up to reelection being smoothed by three developments in 2010 -- the health-care legislation becoming popular after enactment, job creation accelerating briskly and Afghanistan conditions improving significantly. The first two are not happening. He can decisively influence only the third, and only by adhering to his timetable for disentangling U.S. forces from this misadventure.

Email ThisBlogThis!Share to TwitterShare to FacebookShare to Pinterest
Labels: Afghanistan, George Will