First off, as they like to say on the talk shows, let me just go on record with the opinion that everything should be timed the way these World Cup soccer games are timed, and I mean everything: Football, baseball, basketball, hockey, tennis, golf, weddings, funerals, the symphony, major motion pictures, minor motion pictures, nights at the theater, tax audits and invasive surgeries particularly.

When it comes to the clock, bend it like soccer. 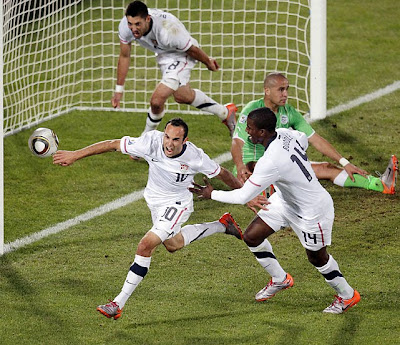 With nothing but net in front of him, Donovan scored his 44th career international goal, the most in U.S. history. "You can't miss from there," he said after the match. (AP)


In soccer, the event starts on time, and it's over in less than two hours, no matter what. No timeouts, no replays, no committee meetings (huddles), no trips to the mound for casual conversation. Save for the 15 minutes of idleness at halftime necessary to prevent lungs from exploding, the clock stops for nothing, just like in reality, where time waits for no man and no beer commercial.

This is a huge public service.

Say you are watching the U.S. vs. Algeria, as I was Wednesday beginning at 10:02:21 a.m., which I know because the clock read 2:21 when I sat down. A pizza going into a preheated oven at precisely that time, therefore, is done at 22:21 of the first half.

Second of all, let me just go on record as saying that everything, and I mean everything -- football, baseball, basketball, hockey, tennis, golf, weddings, funerals, the symphony, major motion pictures, minor motion pictures, nights at the theater, tax audits, and invasive surgeries particularly -- should be narrated by Ian Darke, who did play-by-play yesterday for ESPN. Darke's done several of the World Cup games I've wandered in and out of when I wasn't trying to keep the dog from tearing the clothes off the neighbors.

Darke brings big-time sports an eloquence rarely heard in a world of high decibels and inverted linguistics, that world where "take" is a noun and "filthy" means exquisite.

A veteran on the British soccer scene, Darke chose to augment the swelling drama yesterday with precise and polished language rather than suck the life from it with reflexive screeching.

As both clubs searched desperately for a goal late in a scoreless tie, Darke said they would "just need a spark of wit or invention." Much superior to the common "Somebody's gotta step up!"

When Clint Dempsey's attempt nearly snapped the tension earlier in the match, Darke raised his voice a bit, but not to describe what he calls "a chance gone begging." What he said was, "And the cheers are stilled in the throats of the massive American support."

He called one Algerian shot "crazily optimistic" (shouldn't that be co-opted by Pirates fans?) and advised that the roiling drama flowing through the morning's final minutes must be diluted by bloodless calculation end efficiency. "Emphasis must be on quality," Darke said, "to engineer the chances that are required."

Landon Donovan finally got the fateful chance during four minutes of extra time at the end of the standard 90 minutes. Extra time, or stoppage time, is apparently the time officials figure was wasted by players rolling on the pitch as if they had been shot with an elephant gun after collisions that barely wrinkle their collars.

When Donovan drove home the hockey equivalent of a rebound in the 91st minute, the U.S. had not only advanced to the round of 16, but had won its group for the first time since 1930, which happened to be the first time they staged the World Cup.

This electrifying chapter may or may not bring soccer additional attention in the United States, where something like half the population would, were the games being played in their backyards, demonstratively draw the blinds. I admit to knowing about as much about the game as I do about the modern techniques of vuvuzela manufacturing, but the pace and the language of soccer have a certain prideful permanence, and those things aren't to be dismissed.

Even Donovan, having just scored the goal that could lead to the U.S. stunning the world in this tournament, rose to the rhetorical occasion established by Ian Darke. Asked about his winner, Donovan told Jeremy Schaap, "The ball fell to me and time kind of stopped. You can't miss from there."

Donovan didn't, and he didn't miss when asked about seemingly legitimate U.S. goals being disallowed in the past two games.

"We embody what Americans are all about," he said. "We can moan about it, or we can get on with it."

So we get on with it, because the clock doesn't stop. Not really.


Gene Collier: gcollier@post-gazette.com.
Posted by jtf at 6:02 AM