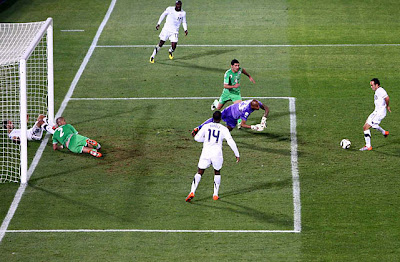 After a mad scramble in front of the net that sent Clint Dempsey sprawling over the ball and into the net, Landon Donovan found it right on the doorstep.(Photo: Simon Bruty/SI)


PRETORIA, SOUTH AFRICA - Tim Howard was playing hurry-up, booting the ball in desperation, watching the backs of his teammates, American athletes, as they raced downfield trying to save four years of effort.

“It wasn’t a soccer match,” Howard said. “It was an athletics match, track and field.”

Sprinting has been, in its way, an American sport, whereas soccer has always been a foreign sport that frightens people — well, except for the millions of Americans lined up in pubs and dens and offices all over their country on a weekday morning, going crazy after the best, or the most dramatic, or the most important soccer match in American history.

The 1-0 win over Algeria, on Landon Donovan’s goal in the first minute of added time, put the Americans into the second round of the World Cup. They will play Ghana on Saturday, in what appears to be one of the more comfortable corners of the draw — though with the Yanks, nothing is easy. But they have achieved their goal, to get out of the first round, a reasonable plan for nouveau soccer nations.

Wednesday’s match turned into a track meet, with wicked elbows and vicious kicks at full tilt, played by Americans with great legs and cardiovascular systems — plus that collective organ known as heart.

“The old 90-second minute,” said Sunil Gulati, the president of the United States Soccer Federation and an American born in Allahabad, India.

The Americans made those seconds pay off in one more frantic rush downfield, producing the goal that changed everything.

This was epic, touching off messages on Gulati’s handheld P.D.A. — one from a friend on Wall Street, saying the brokers were going nuts (and not even over money), and another from a contact within the White House, saying staffers were celebrating en masse. Bill Clinton visited the locker room after the match, praising the players’ spirit.

This was huge, not because it put that foreign sport over the top, which is never the point, and not because it meant anything less about Algeria — a smaller nation and a skilled, competitive team — but because it felt like a sporting event that could unify America for a few screaming moments.

These were not foreign athletes. These were Americans doing something recognizable — Jordan thumping his chest, taking the court for the last shot; Jeter clapping his hands upon getting to second base, summoning something from within, something Americans have seen before.

“We bring something to the table, the American people as a whole,” said DaMarcus Beasley, a reclamation project from the past two World Cups and just about the last American included on the bus to South Africa.

Beasley, the aging sprinter, was inserted into the match in the 80th desperate minute. The Americans knew that England was leading Slovenia, 1-0 (eventually the final score), and they knew they had to win or end this quadrennial project of trying to inch up among the world powers.

They needed a goal. They had gotten a lucky goal in the first match, had been murdered by a referee in the second, and hit the post in the third, but then again, Algeria had hit the crossbar earlier. Luck is usually bad in this sport of not much scoring.

To produce a goal requires a great act of will, sometimes individual but usually a result of a team effort. Bob Bradley coached one of the great games of his four-year term, now sure to be extended. For instance, he was willing to face that Oguchi Onyewu was not up to playing defense on his rebuilt knee, replacing him in the starting lineup with Jonathan Bornstein.

As the need for a goal increased, Bradley sent in Benny Feilhaber at the half, Edson Buddle at the 64th minute, then Beasley. Now it was the old pro football drill of everybody go long. How American was that? Only instead of Joe Montana sending everybody deep, it was Howard, the American keeper who plays in England, half-Hungarian, half-African-American.

Howard fielded a moderate header at 90 minutes 33 seconds, with four extra minutes having been signaled by the referee. This time Howard threw the ball upfield, and the fleet Donovan caught up with it at midfield in full stride, racing into Algerian territory.

After a few wide-open steps, Donovan flicked the ball to the right to Jozy Altidore, the Haitian-American, who banged it into the center to Clint Dempsey, who grew up playing with his Mexican friends in the dusty fields near the border in Texas. Dempsey tapped the ball at the keeper, who could not hold on to it, and there was Donovan to bang it home at 90:45.

Midway through the second half, while watching Howard rush the ball toward his mates, I thought about something Alexi Lalas told me more than a decade ago when he was playing for Calcio Padova in the Italian Serie A. Some players on that weak team would give up if they fell a goal behind on the road, Lalas said, but American athletes would never give up.

It was an interesting point of view, and I was reminded of it again on Wednesday when Tim Howard sent the ball downfield, and a whole track team of runners sprinted after it for the goal that did, at least for three days, change everything.