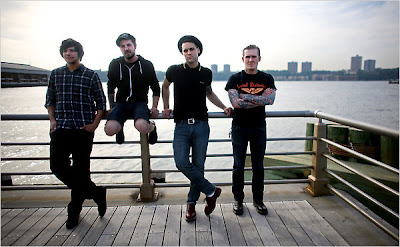 NEW BRUNSWICK, N.J. - DEFIANT though humbled, the Court Tavern stands on a downtown corner here, dwarfed by progress. Buildings at the three other corners of the intersection have given way to parking lots, part of a broader revitalization effort spurred by growth in Rutgers University and hospitals. This worn-down little bar, with a hotbox of a performance space in the basement, is the last visible reminder of the city as it once was.

Inside, the wood paneling is nicked and covered with stickers and posters. At the bar the ice for your drink is often scooped by bare hands. Overhead there are at least three different generations of ceiling tile, attributable in part to the last time the Gaslight Anthem played here, around Christmas 2008. At the time this band, a genuine local success story, was just beginning to outgrow this place, where it had played its first show three years earlier.

The mayhem that ensued that night is one reason why the band’s frontman, Brian Fallon, played a somewhat hush-hush solo set here one Friday last month. The basement filled up early, thick with sweat, with a crowd split fairly evenly between punk bruisers and college-age revelers. But it was the first group to whom Mr. Fallon, something of a neurotic onstage, a tattooed Woody Allen, addressed his asides.

“After this,” he said before he played his first song, “you can go on the Internet and be like: ‘I ain’t seen him in a while. He’s changed so much.’ ”

He hasn’t, really, but whatever success the Gaslight Anthem — Mr. Fallon, 30; the guitarist, Alex Rosamilia, 28; the bass player, Alex Levine, 24; and the drummer, Benny Horowitz, 29 — finds with its grand-scale, thoughtful and thrusting new album, “American Slang” (SideOneDummy), or any subsequent one, it will remain a band forever scarred by geography, New Jersey to the bones.

Certainly, that comes with a particular historical burden: the Gaslight Anthem is part of a rich tradition of New Jersey punk, spanning the Misfits to the Bouncing Souls.

That Mr. Fallon lives in Brooklyn now is beside the point, as is the fact that the New Brunswick punk shows where the band honed its chops — all the members lived in nearby towns — no longer shape a scene.

“I feel like I got a 500-pound backpack on my back filled with New Brunswick,” said Mr. Horowitz, who helped organize concerts when he was still a teenager, and was a stalwart of several area bands before joining this one. “To be honest with you, it’s to the point where it brings me to my knees sometimes.”

Released last week, “American Slang” is the band’s third album, and the first that feels something other than claustrophobic. Insularity, though, has served this band well.

On its two previous albums, the encouraging “Sink or Swim” (XOXO, 2007) and the stellar “The ’59 Sound” (SideOneDummy, 2008), it created its own universe, populated with local characters: deadbeats and strivers, held down by the places that made them who they are.

And everywhere in Gaslight Anthem songs there is the ghost of other music, with Mr. Fallon name-checking or outright quoting influential artists: Miles Davis, Bruce Springsteen, Tom Waits, Bob Dylan. “I was establishing this repertoire with the audience,” he said. “We were definitely drawing lines.”

The result was a pair of albums with their own soundtrack, a brew of punk and soul and blues and hard country. It was traditionalism of a new sort: hybridized, but done so cleanly that it felt inevitable, and maybe a little unfashionable. Certainly it wasn’t built for scale. “The ’59 Sound” has sold approximately 100,000 copies to date, impressive for an album with no radio presence, but still modest.
The obvious touchstone is the mid-1970s period of Mr. Springsteen, who’s become an admirer of the band, joining them onstage at the Glastonbury Festival last year, offering them an opening slot on his tour and providing counsel.

But the band’s sound runs deeper. “I used to always play Brian old black blues stuff and say, ‘How can we do this?’ ” Mr. Horowitz said. Listening to British white blues of the 1960s and beyond helped the band shape its template, which coupled that sound with a direct, forceful punk grind, fleshed out with some spatial ambience by Mr. Rosamilia, who inherited his touch for texture from bands like the Cure and Minus the Bear. Mr. Horowitz, who grew up listening to hardcore and metalcore, gives the songs impressive punch.

“We had always been a band, though we didn’t talk about it, of our influences,” Mr. Fallon said. “On this one we were like, ‘Time to put on our own shoes.’ ”

This album feels more varied, and riskier, than the ones preceding it: not just an exercise in style, but also in ambition. The arrangements have more breathing room, and more dynamism, without sacrificing the band’s central tension between its insistent chugging and Mr. Fallon’s scratchy howl.

In large part Mr. Fallon also abandoned the characters that he’d been hiding his personal stories behind in his songs. “On the earlier records that was my way of keeping a distance between me and me,” he said. “You’re sending someone else out to the firing squad when you have a character.” On this record he sounds more comfortable with “I” then ever before.

For the most part the songs were written while the group was on its first sustained break in a couple of years, when each band member detached a bit from the scene that had originally sustained them.

Mr. Fallon’s wife asked him about moving to New York, prompting him to think, “I’m writing a record, and I would love to be overwhelmed by something bigger than me.” Once they moved into their new apartment, just a few blocks from the Atlantic Yards development, he realized he’d made the right decision: “Sure enough, I was absolutely overwhelmed. I would Google town histories, place histories. I wanted to know everything about everything.”
In songwriting, as with all things Gaslight, commitment is the thing. This is a band that was held together by a common purpose long before friendship came into the picture.

“We weren’t best friends growing up,” said Mr. Fallon, who met each of the band members separately. “It’s not some romantic thing where one guy starts playing ‘Uptown Girl’ on a street corner and the others start singing the harmony.”

Instead, each arrived with the goal of participating in something larger than their previous projects. “Frightened urgency” is what first united the band members, Mr. Fallon jokes.

Control isn’t merely a professional concern for Mr. Fallon, who says he doesn’t drink or do drugs (though he does smoke cigarettes). “I chose to absorb the impact rather than cushion it by drinking or whatever, because I needed that focus,” he said of deciding at a young age to never indulge in substances, and to instead stare down his personal demons. “I knew it would put lines on my face if I faced it young. I would learn something. I would have something to say.”

For someone so unadorned in how he experiences stress, though, Mr. Fallon has always been deliberately obscure in how he repackages it for the world. But the songs on “American Slang” are less affected than those on the band’s previous albums. Listening to the lyrics for the first time gave Mr. Horowitz flashes of concern, leaving him to think: “Man, I should call Brian more. I didn’t know his eyes were this dark.”

All Mr. Fallon was doing, though, was beginning to excavate in a more immediately recognizable way. “I never dealt with, how do I feel about my family? How do I feel about the fact I almost got married when I was 18?” And the further into his past he digs, and the more he resolves, the easier it becomes to leave New Jersey in the rearview mirror.
Mentioning the acclaimed 2000 documentary “The Clash: Westway to the World,” Mr. Fallon emphasizes the direction that band wanted to travel. “The Clash will always be from London,” he said, “and we will always be from New Jersey. But New Jersey doesn’t create us.”
Posted by jtf at 7:07 AM