I'll spit this out quick, before the armies of feminism try to gag me and strap electrodes to my forehead: Tim Tebow is one of the better things to happen to young women in some time. I realize this stance won't endear me to the "Dwindling Organizations of Ladies in Lockstep," otherwise known as DOLL, but I'll try to pick up the shards of my shattered feminist credentials and go on.

As statements at Super Bowls go, I prefer the idea of Tebow's pro-life ad to, say, Jim McMahon dropping his pants, as the former Chicago Bears quarterback once did in response to a question. We're always harping on athletes to be more responsible and engaged in the issues of their day, and less concerned with just cashing checks. It therefore seems more than a little hypocritical to insist on it only if it means criticizing sneaker companies, and to stifle them when they take a stance that might make us uncomfortable. 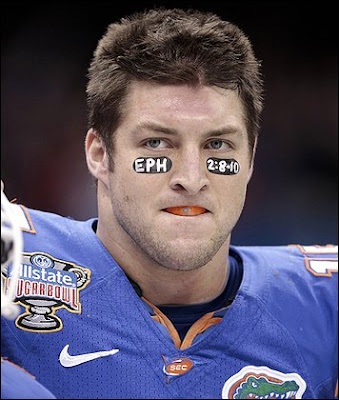 I'm pro-choice, and Tebow clearly is not. But based on what I've heard in the past week, I'll take his side against the group-think, elitism and condescension of the "National Organization of Fewer and Fewer Women All The Time." For one thing, Tebow seems smarter than they do.

Tebow's 30-second ad hasn't even run yet, but it already has provoked "The National Organization for Women Who Only Think Like Us" to reveal something important about themselves: They aren't actually "pro-choice" so much as they are pro-abortion. Pam Tebow has a genuine pro-choice story to tell. She got pregnant in 1987, post-Roe v. Wade, and while on a Christian mission in the Philippines, she contracted a tropical ailment. Doctors advised her the pregnancy could be dangerous, but she exercised her freedom of choice and now, 20-some years later, the outcome of that choice is her beauteous Heisman Trophy winner son, a chaste, proselytizing evangelical.

Pam Tebow and her son feel good enough about that choice to want to tell people about it. Only, NOW says they shouldn't be allowed to. Apparently NOW feels this commercial is an inappropriate message for America to see for 30 seconds, but women in bikinis selling beer is the right one. I would like to meet the genius at NOW who made that decision. On second thought, no, I wouldn't.

There's not enough space in the sports pages for the serious weighing of values that constitutes this debate, but surely everyone in both camps, pro-choice or pro-life, wishes the "need" for abortions wasn't so great. Which is precisely why NOW is so wrong to take aim at Tebow's ad.

Here's what we do need a lot more of: Tebows. Collegians who are selfless enough to choose not to spend summers poolside, but travel to impoverished countries to dispense medical care to children, as Tebow has every summer of his career. Athletes who believe in something other than themselves, and are willing to put their backbone where their mouth is. Celebrities who are self-possessed and self-controlled enough to use their wattage to advertise commitment over decadence.

You know what we really need more of? Famous guys who aren't embarrassed to practice sexual restraint, and to say it out loud. If we had more of those, women might have fewer abortions. See, the best way to deal with unwanted pregnancy is to not get the sperm in the egg and the egg implanted to begin with, and that is an issue for men, too -- and they should step up to that.

"Are you saving yourself for marriage?" Tebow was asked last summer during an SEC media day.

The room fell into a hush, followed by tittering: The best college football player in the country had just announced he was a virgin. As Tebow gauged the reaction from the reporters in the room, he burst out laughing. They were a lot more embarrassed than he was.

"I think y'all are stunned right now!" he said. "You can't even ask a question!"

That's how far we've come from any kind of sane viewpoint about star athletes and sex. Promiscuity is so the norm that if a stud isn't shagging everything in sight, we feel faintly ashamed for him.

Obviously Tebow can make people uncomfortable, whether it's for advertising his chastity, or for wearing his faith on his face via biblical citations painted in his eye-black. Hebrews 12:12, his cheekbones read during the Florida State game: "Therefore strengthen your feeble arms and weak knees." His critics find this intrusive, and say the Super Bowl is no place for an argument of this nature. "Pull the ad," NOW President Terry O'Neill said. "Let's focus on the game."

Trouble is, you can't focus on the game without focusing on the individuals who play it -- and that is the genius of Tebow's ad. The Super Bowl is not some reality-free escape zone. Tebow himself is an inescapable fact: Abortion doesn't just involve serious issues of life, but of potential lives, Heisman trophy winners, scientists, doctors, artists, inventors, Little Leaguers -- who would never come to be if their birth mothers had not wrestled with the stakes and chosen to carry those lives to term. And their stories are every bit as real and valid as the stories preferred by NOW.

Let me be clear again: I couldn't disagree with Tebow more. It's my own belief that the state has no business putting its hand under skirts. But I don't care that we differ. Some people will care that the ad is paid for by Focus on the Family, a group whose former spokesman, James Dobson, says loathsome things about gays. Some will care that Tebow is a creationist. Some will care that CBS has rejected a gay dating service ad. None of this is the point. CBS owns its broadcast and can run whatever advertising it wants, and Tebow has a right to express his beliefs publicly. Just as I have the right to reject or accept them after listening -- or think a little more deeply about the issues. If the pro-choice stance is so precarious that a story about someone who chose to carry a risky pregnancy to term undermines it, then CBS is not the problem.

Tebow's ad, by the way, never mentions abortion; like the player himself, it's apparently soft-spoken. It simply has the theme "Celebrate Family, Celebrate Life." This is what NOW has labeled "extraordinarily offensive and demeaning." But if there is any demeaning here, it's coming from NOW, via the suggestion that these aren't real questions, and that we as a Super Bowl audience are too stupid or too disinterested to handle them on game day.
Posted by jtf at 7:35 PM