Why didn’t the Obama administration interrogate the Christmas bomber? 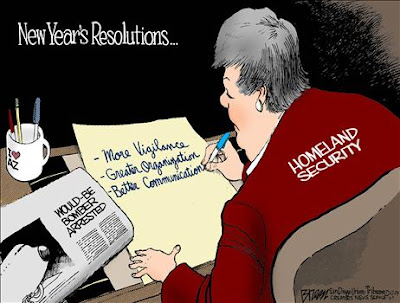 On January 27, the secretary of Homeland Security, Janet Napolitano, was roundly criticized at a meeting of the House Homeland Security Committee. She had ducked the hearing, which was about the Christmas Day terrorist attack, and lawmakers were animated. The surprise was that it was Democrats doing most of the attacking.

“She was invited to testify at this very important hearing, and she should have been here,” said Jane Harman, Democrat from California. “I am very personally disappointed that she isn’t here.”

Chris Carney, from Pennsylvania, was more direct. “I am very dismayed that the secretary herself isn’t here,” he said. “I mean it’s probably fair to ask: ‘Where the hell is Secretary Napolitano?’ ”

Napolitano, who had been scheduled to be overseas, was in town and that evening was seen on national television at the State of the Union address. But she chose not to attend the congressional hearing.

Who can blame her? Immediately after the attack, the White House dispatched her to make its case on the Sunday talk shows, where Napolitano claimed that “the system worked.” At a press briefing on the attack, Napolitano said that she was surprised Al Qaeda in the Arabian Peninsula was showing so much “determination” to strike in the United States and acknowledged that she did not expect the group to send individuals—as opposed to groups—to conduct attacks. And earlier last month, at a Senate hearing on the same subject, she was roundly castigated for those comments and for the fact that she was not a part of the decisionmaking process that resulted in the terrorist, Umar Farouk Abdulmutallab, being mirandized fewer than 12 hours after he was detained.

Napolitano is a convenient scapegoat. After all, White House spokesman Robert Gibbs also claimed on national television that the system worked. The head of the National Counterterrorism Center, Michael Leiter, left for vacation the day after the attack. Top White House counterterrorism adviser John Brennan told him to go. Director of National Intelligence Dennis Blair did not know that the elite interrogation unit proposed by the White House— the high-value detainee interrogation group (HIG)—does not yet exist. And the president, three days after interrogators supposedly elicited valuable intelligence about Al Qaeda in the Arabian Peninsula from Abdulmutallab, claimed that the attack was the work of “an isolated extremist.”

That last claim was the subject of an exchange between Representative Peter King, Republican of New York, and the NCTC’s Michael Leiter at the January 27 hearing.

Asked how the president could have made such a claim, Leiter made it clear that the intelligence community had told the White House about Abdulmutallab’s involvement with Al Qaeda in the Arabian Peninsula—something the bomber acknowledged in his initial interview with the FBI.

I will say that on the night, on Christmas night we advised the White House, and I think the White House immediately said, that we believe this was an attempted terrorist attack. I will also add that during this entire look back—an ongoing investigation, as you know—different pieces of information have come forward which have made it more and more clear, I think, each day of his connections to Al Qaeda in the Arabian Peninsula.

King pressed Leiter: “Who would have allowed him to say ‘isolated extremist’ when he was not isolated?”

“Congressman, I know that the National Counterterrorism Center and others were providing intelligence to the White House on an ongoing basis,” replied Leiter. “I simply don’t know how those statements were produced.”

The White House hasn’t been any more forthcoming. Asked for details on the handling of Abdulmutallab, Gibbs has provided little information. At a White House briefing, he was asked about a media report that Abdulmutallab had been interrogated for fewer than 50 minutes before FBI agents read him his rights. Gibbs claimed that he did not know how long the interrogation lasted. But in an earlier appearance on Fox News Sunday, Gibbs had not disputed a claim from Chris Wallace that the interrogation lasted just 50 minutes. Gibbs further claimed that FBI interrogators “were able to get all that they could out of him.”

That, of course, is nonsense. Several sources confirm that Abdulmutallab’s interview lasted 50 minutes. And while Abdulmutallab did share some information about his time in Yemen, sources say that intelligence professionals, particularly those who have been tracking Al Qaeda in the Arabian Peninsula, are furious that they did not have any opportunity to learn more from a person who might have fresh knowledge about the group and its leaders. One source told me that there is virtually no one in the intelligence community who will defend the decision to mirandize Abdulmutallab after talking to him for less than an hour.

The failure to obtain more from Abdulmutallab is all the more significant because intelligence officials are conducting fewer interrogations today than at any time since the 9/11 attacks. There are three reasons: (1) The administration has dramatically changed U.S. interrogation policy, sources say, and there is widespread confusion about what is permissible; (2) the HIG, which is supposed to conduct interrogations, does not yet exist; and (3) there are fewer terrorists to interrogate because the administration prefers to kill them with drone strikes rather than capture them on the ground.

The administration never misses a chance to make the last point—indeed, President Obama mentioned it in his State of the Union address. But you cannot interrogate a dead terrorist, which makes it all the more imperative that you get everything you can from any terrorists you do capture.

That was the case here. Abdulmutallab had provided some information to law enforcement officials immediately after his capture, and we surely would have obtained more if we had treated this foreign terrorist as an enemy belligerent and placed him in the military tribunal system instead.

Abdulmutallab sits in jail today with intelligence that we could be using to prevent future attacks. Top administration and intelligence officials—including Blair, FBI director Robert Mueller, and CIA director Leon Panetta—will have an opportunity to explain that fact at a hearing of the Senate Intelligence Committee this week.

If they show up.

Stephen F. Hayes is a senior writer at The Weekly Standard.
Posted by jtf at 11:19 AM

Anonymous said...
This comment has been removed by a blog administrator.
2:16 AM