FORT LAUDERDALE, Fla. -- Here's a new rule for the next 100 annual Super Bowl news conferences by the commissioner of the National Football League: No questions that include any of the following:

B) The name of a country.

C) Both. Especially both. 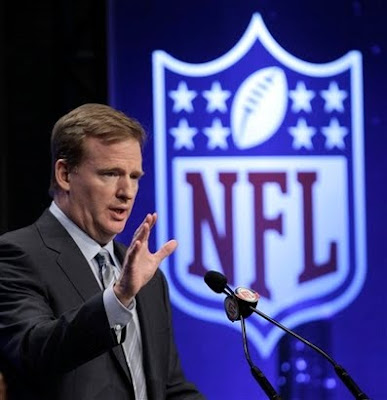 Yesterday's ritualistic appearance by Roger Goodell on the eve of Super Bowl eve devolved into still another NFL Network version of Where in the World is Carmen San Diego. Still again, journalists from all 50 states and dozens of foreign countries jockeyed for the opportunity to force the commissioner to conjure up the league's exact geography five or 10 years in the future.

Will the Jaguars stay in Jacksonville?

Will the Rams stay in St. Louis?

Will there be a Super Bowl in New York?

Will the Chargers leave San Diego for Los Angeles?

Will somebody, anybody, move to Toronto?

Why doesn't Mexico City get another regular-season game when London just keeps getting them?

Will there be a Super Bowl in Hawaii?

Will there be a regular-season game in Japan?

Will there be a regular-season game in China?

Will they ever fix Route 22 east of Murrysville?

Did all those letters Paul wrote to the Corinthians ever reach Corinthia?

All right those last two I made up, but all the rest were asked in some form Friday and all were answered gamely and sincerely by Goodell but in lieu of this truth, which is that to each and every one, Goodell could comfortably have said "I don't know."

"I spent quite a few years in Japan with the American Bowl Series and our partners trying to develop the game. We have some great fans over there who really understand the game of football. I think it is important for us to continue to be there. We have determined though, in the short term, where our focus needs to be as far as regular-season games are concerned. There are some unique challenges to playing a regular-season game in the Far East."

Yes, like putting Casey Hampton in an airplane seat for a brisk 7,000 miles.

These kinds of questions and their unavoidable non-answers consume the majority of the commissioner's time on the only occasion on which he's widely available, reducing the discussion of relatively urgent matters.

Too little time was spent again Friday on the concussion issue, an ever-growing concern in a game in which collisions are becoming more violent. Goodell deserves credit for his initiative in this area, but he hasn't gone nearly far enough.

Right. Too bad the league isn't doing any of those things.

The league warns about and occasionally penalizes and fines players for helmet-to-helmet hits, but not more than one in 10 such incidents are even flagged by the game officials in my estimation. The league refuses, as the Post-Gazette's Ed Bouchette pointed out in December, to require players to wear helmets that have been proven safer, and its players say they won't due to -- are you ready? -- fashion concerns. As for the coaches, it's hard to believe that so many defensive players think tackling is the process by which you turn yourself into a surface-to-air missile without any coaching influence. So much for "making sure our coaches and our players understand the serious nature of these injuries."

The other issue that should have gotten more attention Friday was the game's looming labor trouble, as Goodell tried to defuse the increasingly inflammatory remarks of players union firebrand DeMaurice Smith, who said Thursday that on a scale of 1 to 10, a work stoppage is "a 14."

"I couldn't make that prediction and I sure hope he's wrong and I sure hope it doesn't become a self-fulfilling prophecy," Goodell said. "Right now, we don't need a lot of focus on that. We will have an agreement, it's just a matter of when, but talking about options like work stoppages is not going to get us there. If it comes to something like that, we've all failed.
"There have been talks, but I want to see production. Just meeting isn't good enough. If our objective was to meet, we'd already have met that."

If the NFL owners and players can't formulate an equitable division of about $10 billion annually, if they'd rather take the game away from a fanbase that has made the average NFL franchise worth in excess of $1 billion in the estimation of Forbes Magazine, wait until they see the helmet-to-helmet hit that triggers.

On a side note, I failed again to get my question asked yesterday, but this was it:

Will players still be allowed to wear ballcaps on the sideline in an uncapped year?

Ed Bouchette's blog on the Steelers and Gerry Dulac's Steelers chats are featured exclusively on PG+, a members-only web site from the Pittsburgh Post-Gazette. Our introduction to PG+ gives you all the details.