Mark McGwire, the Cardinals' new hitting coach, speaking Jan. 17 after the team's Winter Warm-Up event, at which he received a standing ovation.

ST. LOUIS — The night Mark McGwire slugged his record-breaking 62nd home run, Bob Beumer was cheering from the upper reaches of the old Busch Stadium. That ticket stub is on display in his basement, where it joins some photographs, a few autographed baseballs and other McGwire mementos from the home run chase in 1998 that gripped the nation and revived the sport. Now, though, for Beumer and many other Cardinals fans, those days seem a bit less triumphant.

“It’s like when you find out your favorite grandfather didn’t turn in his income taxes,” Beumer said of McGwire, the Cardinals’ new hitting coach, who recently admitted using performance-enhancing drugs for most of his career. “You didn’t like him any less, but you squint at him and look at him a little funny because you wish he wouldn’t have done that.”

Beumer, 62, is the former owner of Hamilton Jewelers, which was a stalwart advertiser and sponsor of the Cardinals for more than three decades.

“The best way I can describe it,” Beumer said, “is that he’s brought a very big uneasiness to Cardinals baseball.”

That is a popular sentiment in this grand baseball town, where for the last three weeks they have gone crazy, folks, gone crazy trying to reconcile their feelings about the most divisive local baseball issue of their time. Should McGwire be forgotten or forgiven, jeered or cheered? Is he a villain or merely a product of his era? What is more relevant, the imprint his four and a half seasons in Cardinals red left on their lives, or the black mark it left on the record books?

Everyone and no one seems to know for sure.

The minute-long standing ovation McGwire received at the Cardinals’ annual Winter Warm-Up event Jan. 17, his first public appearance since admitting to steroid use, less than a week earlier, represented only a small cross section of the fan base. Bernie Miklasz, a longtime sports columnist at The St. Louis Post-Dispatch, likened it to the reception Sarah Palin or President Obama received at their parties’ nominating conventions.

“If you get away from the hardcore base, there’s been a legitimate and powerful debate whether this is a good thing or not,” said Miklasz, referring to McGwire’s taking over as the hitting coach. “People are talking about the past, they’re arguing about the past.”

Miklasz, who also hosts a weekday radio show on WXOS-FM, said that in 25 years working here, he had never seen or heard the community divided about anything involving the Cardinals. “Everyone just wants to know whether the family is ever going to get back together again,” he said.

St. Louisans are not accustomed to controversy swirling around their sports heroes. From Stan Musial to Albert Pujols, Kurt Warner to Marshall Faulk, iconic players have largely excelled on the field and lived clean lives off it. In a sense, fans here have been mentally preparing for McGwire’s admission since 2005, when he dodged questions about steroid use before Congress.

When McGwire ultimately confessed, during an orchestrated series of interviews Jan. 11, including one with The New York Times, many of those same fans were left with a hollow feeling. Despite several opportunities, McGwire repeatedly dismissed any link between performance-enhancing drugs and his remarkable power. If McGwire had acknowledged even receiving an inadvertent benefit from taking steroids, Miklasz said he thought a majority of local fans would forgive him.

“This is a very loyal town, but people are having a very hard time processing all of this,” said Tom Burke, 53, a lawyer from Town and Country, Mo. “For most people, that just isn’t complete enough of a story. It’s not realistic enough. To me, it seems like the Cardinals underestimated the fallout that was going to occur.” 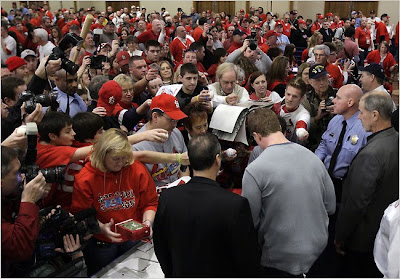 Shortly after he admitted steroid use, Mark McGwire drew a crowd at the Winter Warm-Up in St. Louis.

First and foremost was the recent criticism of McGwire by several members of the Cardinals family. Adolphus Busch IV, scion of the family that once owned the team, said in a statement that McGwire “deliberately cheated the game,” “stole its most coveted records” and “was paid millions while perpetrating a fraud.” Jack Clark, a popular first baseman on two pennant-winning teams in the 1980s, said that seeing McGwire in uniform made him want to throw up and that McGwire, like all steroid users, should be barred from baseball forever.

Perhaps the most resonant criticism came from Whitey Herzog, a beloved former manager, who at a dinner in Appleton, Wis., said he could not fathom how McGwire received a standing ovation at the Winter Warm-Up and that Clark was roundly booed. “Now what the hell is the matter with society when that happens?” Herzog said.

Herzog, whose Hall of Fame plaque will depict him wearing a Cardinals cap, did not want to revisit that topic when he was approached last week in the driveway of his suburban St. Louis home. “I don’t want to talk about that,” he said, closing the garage door behind him.

“Their voices represent an important part of the Cardinals, which is their storied past,” said Tom Ackerman, the sports director and a morning anchor at KMOX-AM. “St. Louis people love this team, but they also love what it has represented, and there’s a lot of respect for the people who have put the team together and have helped build the franchise into what it is today. Whether people agree or disagree, they’re listening.”

One person who appreciated Herzog’s reaction in Wisconsin was Rick Kordenbrock, a high school social studies teacher from Ladue, Mo. Kordenbrock said he felt “duped and hoodwinked” into thinking that McGwire’s prodigious power was all natural.

“All these great players like Hank Aaron and Willie Mays and Frank Robinson — that’s who McGwire cheated,” Kordenbrock, 55, said. “He cheated the history of the game.”

The Cardinals realized the public-relations risk involved in bringing back McGwire, who has been out of baseball since retiring in 2001, but their general manager, John Mozeliak, said in an interview that Manager Tony La Russa still would have been granted permission to hire McGwire had they known about his steroid use. Asked about the outcry from Herzog and Clark, Mozeliak said he respected their opinions and added that he was encouraged that other Cardinals icons, like Red Schoendienst, have expressed their support, as have other Hall of Famers like Aaron, Ernie Banks and Mike Schmidt.

“Our ownership and I are of the mind-set that steroid use shouldn’t ban you from the game of baseball for life,” Mozeliak said. “It’s a mistake, but if you own up to it, you should be forgiven and should be allowed to be work in the game and do whatever you like.”

The former Cardinals great Bob Gibson has also come out in support of McGwire. He said Monday on the Post-Dispatch Web site that it was time to move on, an echo of what many fans have said. Gibson also took issue with Herzog and Clark.

“Those two aren’t in the Cardinals family,” he said. “I don’t think that’s going to be an issue with anybody other than between McGwire and them — which it probably should be. I don’t think it’s their place to criticize him the way they did.”

McGwire has begun working with some Cardinals hitters in Huntington Beach, Calif., and is scheduled to arrive at the team’s spring training complex in Jupiter, Fla., in about two and a half weeks. Burke said he hoped that once the daily rhythms of baseball resume, the chatter on sports-talk radio would focus exclusively on more important things — like the Cardinals’ search for a reliable fifth starter or contract extension talks with Pujols — and that McGwire’s presence would not become more of a distraction.

These are some of the things that pop into Burke’s mind on those occasions when he travels along the Mark McGwire Highway, a stretch of Interstate 70 near the city limits. He says he expects to attend about 25 Cardinals games this season, and at some point, probably during batting practice, McGwire will amble onto the field, and Burke may be moved to respond.

“Booing isn’t part of my repertoire, but I’m hardly in the standing ovation category, either,” Burke said. “Maybe a mild golf clap. Or maybe just no reaction at all. That might be best.”
Posted by jtf at 7:24 AM