We have not “convicted 195 terrorists in federal court since 2001.” 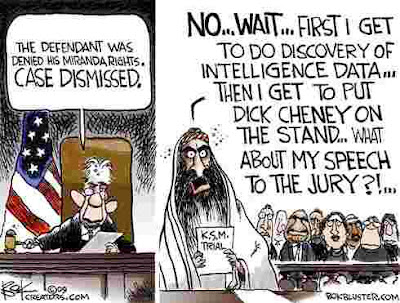 It is welcome news that the Obama administration has reversed its irrational decision to try Khalid Sheikh Mohammed and four other 9/11 plotters in Manhattan’s federal court. So far, however, the administration has merely — and grudgingly — begun to climb out of this hole of its own making.

The president seems more poised to move his error than to correct it. Reports indicate that the administration thinks the challenge now is to find a new location in which to proceed with the same ill-advised civilian prosecution. Instead, the idea at this point should be to build a sensible strategy going forward: military commissions for now, and, ultimately, a new system for handling national-security cases.

No such luck. Rather than learn from this experience, the Left is doubling down on civilian due process. Its agitprop du jour is a bogus numbers game.

“We need to develop a greater resiliency in this country on security issues,” Sarah E. Mendelson of the Center for Strategic and International Studies told the New York Times. “The administration needs to remind the American public that we have convicted 195 international terrorists in federal courts since 2001.”

That 195 number is making the rounds. It is both false and an exercise in hypocrisy.

The figure is mined from “In Pursuit of Justice,” a report published by Human Rights First (HRF) in May 2008 and updated last July (available here). But the report does not claim that 195 international terrorists have been convicted. Rather, it says that 195 defendants have been convicted so far in 119 cases that have some connection, however attenuated, to terrorism. (See the report’s preface.)

HRF goes on (at page 5) to explain its methodology. It examined prosecutions that were in some way “related to Islamist extremist terrorist organizations” (emphasis added). It should be obvious enough that this does not mean the people prosecuted were necessarily “international terrorists,” or that the cases involved actual terrorism charges. But the report makes the obvious explicit:

In building our data set of terrorism cases, we have attempted to capture prosecutions that seek criminal sanctions for acts of terrorism, attempts or conspiracies to commit terrorism, or providing aid and support to those engaged in terrorism. We have also sought to identify and include prosecutions intended to disrupt and deter terrorism through other means, for example, through charges under “alternative” statutes such as false statements, financial fraud, and immigration fraud. [Emphasis added.]

This explanation makes clear that the cases HRF is talking about are, in the main, cases that no one disputes can be handled safely and efficiently by the civilian courts. For example, let’s say the FBI is investigating al-Qaeda and it interviews a person suspected of having relevant information. That person lies during the interview, so the prosecutors indict him for making false statements, and he pleads guilty. Under the HRF’s standards, that gets tallied as a conviction in a “terrorism case.” But it hardly means the defendant is an international terrorist, let alone a KSM.

The same holds true for crimes like financial fraud and material support. These often involve people in the U.S. who are not themselves terrorists. Instead, they either contribute money and other assets to the jihadist cause (e.g., by contributing money to “charities” that are actually fronts for al-Qaeda or Hamas), or else help terrorists surreptitiously move their funds from place to place.

To be sure, this is not always the case. As I recounted back in May, the Obama Justice Department gave a sweetheart deal to Ali Al-Marri. He was a hardcore terrorist, yet prosecutors allowed him to plead guilty to a charge of material support to terrorism. As a result, he got an absurdly short sentence rather than the life-imprisonment term he’d have gotten if convicted on an actual terrorism charge. Al-Marri, however, is an unusual result. At least up until 2009, if a person could be proved to have committed terrorism crimes, he was almost always charged with terrorism crimes.

No opponent of civilian trials for enemy combatants is claiming that everyone who is connected in any way to a terrorism case should be transferred to the military courts. The quarrel here is over how to handle real operatives of al-Qaeda (and its components, like al-Qaeda in the Arabian Peninsula). We are talking about jihadists who are captured plotting, carrying out, or having carried out attacks against the United States — not just anyone who happens to get ensnared in the broad net of a terrorism investigation.

A handful of the 195 convicted defendants counted by HRF really were terrorists, but that doesn’t change the fact that there are better ways than civilian trials to try enemy combatants. Calling a prosecution “successful” just means that we convicted the defendant; it does not mean that national security was well served. If, because of civilian due-process rules, we had to reveal national-defense information that we could have kept secret in a military commission — or if we had to spend hundreds of millions of dollars to address security concerns that could have been obviated by having a military trial in the safety of Gitmo — then the country would have been better off getting the same result in a military commission. That is common sense.

The numbers rigging, moreover, is a bit rich coming from left-wing lawyers. They spent the seven years after 9/11 accusing the Bush Justice Department of artificially inflating its numbers to convey a false sense of counterterrorism effectiveness. How? By opening cases as terrorism investigations but disposing of them without terrorism charges — especially through the immigration laws (i.e., deporting suspected terrorists and facilitators).

That’s right: When the Bush administration used the immigration laws to boot terror suspects out of the country, the Left and its fellow travelers like CAIR claimed this was racial profiling masquerading as counterterrorism. Now, in the age of Obama, we learn from HRF that “immigration fraud” counts as a “terrorism case” — so the group can boost the numbers and claim that the same Justice Department (under the Bush administration for most of the period covered in the report) has done a great job of combating terrorism in civilian court.

In any event, the fact that Umar Farouk Whoever can safely be handled in civilian federal court for procuring his green card by fraud hardly means Umar Farouk Abdulmutallab should be brought to civilian federal court for a wartime mass-murder strike targeting nearly 300 Americans — or that we should bestow on KSM the same Bill of Rights protections no longer enjoyed by the nearly 3,000 Americans he slaughtered in a wartime attack.

It’s time to cook up a new plan. Cooking the books is not going to cut it.

— National Review’s Andrew C. McCarthy is a senior fellow at the National Review Institute and the author of Willful Blindness: A Memoir of the Jihad (Encounter Books, 2008).
Posted by jtf at 10:24 AM