The Iranian Revolution Devours Its Young 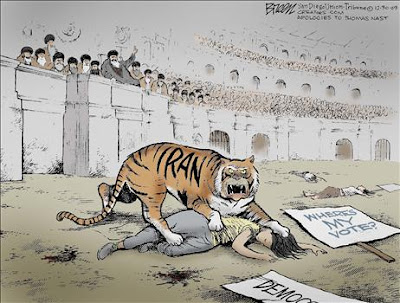 It looks like February 11th will be the most violent confrontation to date. The regime is taking unusual measures to put down the promised demonstrations. In many ways it resembles the “Chinese solution.” First, an unprecedented mobilization: 120 trains and something like a thousand buses have been deployed from as far away as 250 kilometers from the capital. They will be used by the Revolutionary Guards and Basij to bring tens of thousands of paid “volunteers” to Tehran. These will consist of entire families (dependent on the regime) to counter the Green Wave. Each family gets $80 for the day, plus free food. The regime is aiming at 300,000 thugs in the streets. The Greens don’t think the numbers will be that high, and in any event they expect ten times that number of protesters, upwards of three million increasingly angry people, demanding freedom and justice.

Their resolve has undoubtedly been hardened by the very tough interview released earlier this week by Green leader Mir Hossein Mousavi. As before, Mousavi put himself on the line, defying the regime to move against him as the mullahs have moved against his friends, allies, and family members. It’s quite a challenge:

Today, the prison cells are occupied with the most sincere and devoted sons of this nation: students, professors and others. [Security forces] are trying to prosecute them with espionage or charges related to financial or sexual misconduct – charges based on expired formulas – while the real criminals and thieves who steal public money are free. Instead of looking for the real spies, they accuse decent religious people. I should take this opportunity to express my regret that all of my advisors, who are decent, honest and educated individuals, have been arrested; that I am not with them. These days, there is not a [single] night that I do not think of Imam [Khomeini], martyr Beheshti and others. I whisper to them that what was achieved is far from what they sought…

Khamenei has still not mustered the courage to strike directly at Mousavi or Karroubi, which everyone sees as a sign of weakness. They see it as I do, as evidence that he is not prepared for a real showdown, fearing the vastly greater numbers of the Greens, and the unreliability of his armies. He knows that the recent Green video, appealing to the armed forces to join the revolution, is having an effect.

Still, I don’t think there has been anything in recent history that compares to the regime’s planned actions. All internal communications are supposed to be shut down: internet, cell phones, SMS, you name it. Since this would in any case paralyze the country, offices, factories, banks and practically everything else will be shut down until the 14th; thus they can afford to shut down the internet. The Chinese have reportedly provided essential services (including internet) for key security offices and Khamenei’s residence.

This does not look to me like a strategy for a “final solution;” it’s more like a desperate throw of the dice with fighters of unproven courage and reliability. We know, after all, that considerable numbers of trained police have been fired of late, that their replacements are “country boys” with little experience and probably poor discipline, and that the ex-police are likely to have become (if they weren’t already) Green recruits.

While exact numbers have not been secured, Fox News is reporting that sources within Tehran are reporting that 20 to 30 percent of the police force are being let go. That equates to roughly 5,000 officers and more that have been dismissed throughout the country.

A former police officer told NewsCore that the police are bring replaced by village people who desperately need money and would [use] violence without hesitations.

Forces are typically under the control of the Revolutionary Guard, and they are responsible for keeping local peace. Now sources report that they will be much less organized and possibly have much less control.

One former officer was reported saying, “Many of us are being replaced by bus loads of people from villages who are willing to do anything for a piece of bread instead of protecting the ideas of the 1979 Islamic Revolution.”

What, then, to do? Khamenei has ordered the massacre of the country’s youth, especially journalists, academics and activists, especially women. Their treatment is atrocious, as you can see from this tweet: “Ordinary prisoners are protesting, saying screams, noises, sobbing & crying of injured from Sepah (intelligence forces) section keep the entire prison awake.”

On the other hand, every night the doors of Evin Prison open, and ten or twenty battered citizens emerge to a waiting crowd of relatives, praying that this will be the night for their own loved ones to be released. Inevitably, this has turned into an ongoing protest that the Basiji themselves have been unable to quell. On Friday night, more than a thousand people gathered at Evin, and the Basiji tried unsuccessfully for more than three hours to drive them away.

The leaders are even spooked by the color green, which is inconvenient, since it’s in the flag. Ahmadinejad recently appeared on television with the flag in the background…and the green had become blue(!). Just as poor Captain Hook lived in dread of the sound of the ticking clock, so Ahmadinejad dreads the sight of green. This is not a sign of great resolve. If you want great resolve, listen to Mousavi:

The people know that these executions are only [carried out] so that a brutal, ruthless leader of Friday prayers – one who has constantly defended corruption, violence and deception – can applaud them. It matters not to him that there are abundant [instances of] forced confessions, and he does not care that [those executed] have had nothing to do with the election. For him, what matters is the power of the executions to generate fear. He is ignorant of the power of innocent blood. He doesn’t know that it was the blood of martyrs that caused the Pahlavi regime to collapse. From the revolution onwards, people have believed in freedom, independence and the Islamic Republic. The courageous resistance and the strength of our people and our soldiers during the eight year war was a sign of the fundamental changes that had taken place in our society…parts of our country were lost in the wars, crises and political games present during the time of the shahs [kings]. The courageous resistance of our people during the eight-year war ended this vicious cycle. And now, in the courageous, defiant and green rows of people who demand their rights, we see a continuum of the very struggle we saw during the war and the revolution.

He’s telling Khamenei what he least wants to hear: We Greens are the true revolutionaries and we cannot be intimidated. We will keep fighting until you are gone.

It’s astonishing and sad to see how our “intelligence community” persists in believing that the protests are merely a blip on the screen of the Islamic Republic, a momentary phenomenon that will shortly go away. The “experts” are nothing if not foolishly consistent: they failed to predict the results of the June “elections;” they failed to anticipate the aftermath; they thought the demonstrations would diminish and then end; they seem not to comprehend the depth of the regime’s crisis, and they expect the regime to triumph. As Eli Lake tells us,

Despite political turmoil that has brought hundreds of thousands of protesters into the streets since the June 12 presidential elections, Iran’s decision-making process would remain the same, [Director of National Intelligence Admiral Dennis Blair] said.

Overall…he gave he protesters little chance for success. “Strengthened conservative control will limit opportunities for reformers to participate in politics or organize opposition,” he stated. “The regime will work to marginalize opposition elites, disrupt or intimidate efforts to organize dissent, and use force to put down unrest.”

To which Eli permits himself the obvious retort:

The U.S. intelligence community in the past failed to foresee political events in Iran. For example, a noted CIA assessment of Iran in the fall of 1978 predicted there was no prospect for an Islamic revolution. That prediction proved wrong within five months.

He could have added that CIA was positive that Gorbachev was firmly in control just before the fall of the Soviet Empire. Revolutions aren’t easy to see; you need a good nose to sense it, and the sense of smell is frowned upon at institutions of higher learning and deep thinking.

Still and all, this revolution is the biggest we’ve seen in a long time. Lenin, who thought such things were led and organized by a tiny, conspiratorial vanguard, would be astonished to see that tens of millions of Iranians, from all classes, tribes, ethnic groups and sexes, are defiantly putting their lives on the line.

Anyone think the good Admiral will resign when the regime comes down? He should.

UPDATE: thanks Instapundit (with Michael Totten subbing for Glenn)
UPDATE 2: Not everyone is waiting for the 11th; seems the citizens of Lar have driven the local security forces out of town. There’s even video.
Posted by jtf at 9:51 AM