Caulfield and the Librarians

We all know about J.D. Salinger's young hero, Holden Caulfield, and the three days he spends in New York City. We know that beneath Holden's youthful bluster and swear words -- he says "goddam" on every page, almost, and when he sees "F[--]ck you" scrawled on a wall, he tries to erase it -- he has a heart of gold, if you really want to hear the truth of it.

Despite his inner goodness, the librarians of America saw things differently. They "censored" the book. Between 1961 and 1982, according to a Wikipedia entry, Catcher in the Rye became "the most censored book in high school libraries in he United States." 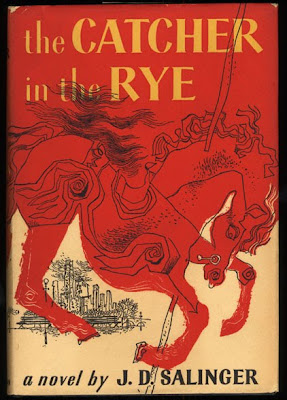 But maybe the librarians knew something that the rest of us have overlooked.

Anyway, Caulfield and Antolini talk for a while, and Antolini has several highballs. Holden thinks that his old teacher is in danger of becoming an alcoholic. They keep on talking, but Holden is tired. He has been up for two days without sleep. Mr. Antoloni says he can sleep on the couch, and Holden says okay. They make up the couch and Holden goes to sleep. Then he is rudely awakened. His old teacher has crept back into the room and and is ruffling his hair. "He was sort of petting me or patting me on the goddam head," Holden says.

He sprang to his feet. "What the hellya doing?"

Holden is alarmed because he knows "more damn perverts than anybody you ever met."

Antolini, it turns out, is a pervert, "perverty." Something "perverty" had happened, Holden decides. So he bolts for the apartment door. Antolini was a "flit." He had been making a "flitty pass at me."

Antoloni tries to get him to stay and go back to his couch. But Holden leaves anyway, goes to Grand Central Station, and gets in touch with his much-loved sister, "old Phoebe."

So there you have it. Holden talks about perverts and flits, in a book published by Little Brown in 1951, and reprinted a million times since then.
A Back Bay paperback edition reappeared in 2001.

Is it allowed, in the 21st century, to use words like that? Notice that the New Yorker refused to published Catcher in the Rye, but they did publish Salinger's unreadable story "Hapworth 16, 1924." So maybe Harold Ross at the New Yorker was alert to these nuances of political incorrectness long, long ago.

I probably shouldn't reveal this, because it is inside information. But the librarians have known all along that Catcher was an "incorrect" book, and it wasn't because of all the superfluous goddams and the (rare) four letter words. And get this. Now that its famous author is dead they are planning to mount a huge censorship raid and remove this prejudiced volume from library shelves across the land.

Do they have the blessing of the Human Rights Commission? You had better believe that they do.

When I asked a source at Little Brown if they would allow a book to appear today in which a gay man is called a "pervert" or a "flit," he laughed openly.

"The question answers itself," he said.

If you haven't read Catcher in the Rye yet, better get a hold of it soon.

Because it is likely to disappear from the shelves before you can say flit.

Tom Bethell is a senior editor of The American Spectator and author of The Politically Incorrect Guide to Science, The Noblest Triumph: Property and Prosperity Through the Ages, and most recently Questioning Einstein: Is Relativity Necessary? (2009).

Link: Caulfield and the Librarians
Posted by jtf at 7:34 AM