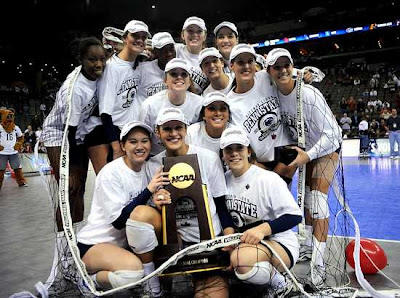 The Penn State Lady Lion volleyball team poses with the national championship trophy after sweeping Stanford University for its second consecutive National Championship Saturday in the 2008 Division I Women's Volleyball Championships in Omaha, Nebraska. (For the CDT/Steve Manuel)

After months of brushing off talk about being the best women’s volleyball team of all time, Penn State’s players can finally lay claim to the title.

With one t h u n d e r ous swing after another, the Nittany Lions brought down Stanford and danced off the floor of Omaha’s Qwest Center with their second straight national championship.

Led by a huge final set from tournament Most Outstanding Player Megan Hodge, who had nine kills in the frame and a match-high 16, Penn State knocked down the Cardinal 25-20, 26-24, 25-23 Saturday night, wrapping up the fourth undefeated season in NCAA Division I history.

“It’s an honor to fulfill those expectations,” said senior libero Roberta Holehouse, who had a match-high 18 digs. “We got to show that it wasn’t just a label and it was something that we took pride in and something we believed.”

With the final swing was senior leader and the national Player of the Year Nicole Fawcett, who instead of rocketing the ball through the Stanford defense gave a soft swipe at the ball, nipping a blocker’s hand and putting the ball on the floor for the team’s 64th consecutive victory, extending their NCAA record.

“It hasn’t sunk in yet, it hasn’t from last year yet and I don’t think it’s ever going to,” said Blair Brown, who provided key change-up opportunities while putting down nine kills to go with five blocks. “It’s a big goal. It’s a great thing for our team to accomplish together.”

The Nittany Lions (38-0) may have been denied a complete perfect season, not giving up a set for 111 straight frames until Nebraska took two in the semifinals on Thursday, but with a record six All-Americans in the starting lineup and back-to-back championships for the seventh time in NCAA history, Penn State put its stamp on history. 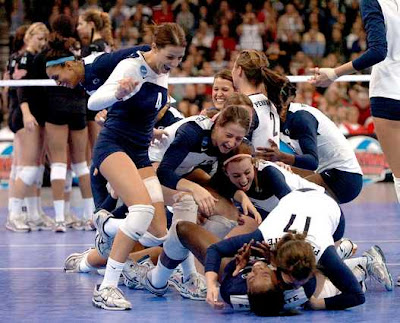 The Penn State Lady Lion volleyball team celebrates after sweeping Stanford University for its second consecutive National Championship Saturday in the 2008 Division I Women's Volleyball Championships in Omaha, Nebraska. (For the CDT/Steve Manuel)

“People are going to say what they want to say and there are a lot of words being spoken about our team,” said Hodge, who also had 14 digs and was the Most Outstanding Player of last year’s final. “At the end of the day we play for each other, we play for Penn State, we play for Coach (Russ) Rose and all the coaching staff and that’s what it comes down to. It’s not about any labeling.”

“This group had the potential to do certain things and they kept working hard,” said Rose, the national Coach of the Year. “They kept having to hear me talk about what their potential was and why we had to keep working. Other people can talk about those things, they can talk about records.”

Luckily, unlike that battle against Nebraska, there was no such drama on this night in front of 14,299 enthusiastic but hardly partisan fans. The teams traded the lead often, but in the final few points, they demonstrated why they were so feared all season.

Also, unlike two nights earlier when a 2-0 lead disappeared after intermission, Penn State started flexing its muscles right from the set’s outset behind one impressive swing after another from Hodge, who usually punctuated those kills with a roar.

“Thursday night and even last year in this same match we kind of let off a little bit in the third game and it turned into a more competitive match going five,” Hodge said. “I think we all got it in our heads that we have to go out there and play hard.”

With Penn State up 23-18 and just two points away from grabbing the trophy, the Cardinal (31-4) rallied with three big kills from Alix Klineman to get within 23-22. Hodge ended the run with her final blast of the night cross-court, and after another Klineman kill, Penn State scrambled with Christa Harmotto setting her fellow senior Fawcett for that final point.

The players waited anxiously for what seemed an eternity before the referee signaled the point, and the match belonged to the Nittany Lions and then everyone swarmed the floor in celebration. A woman tried repeatedly to hand off the trophy before Kelsey Ream finally turned around to see her and hoisted the prize high in the air.

“Going through my head was, ‘They better call the touch,” said Fawcett, who had 10 kills and 11 digs Saturday. “At that time it did seem like an eternity but Megan was already celebrating so I figured we already got the point. It was good to see everyone rushing the floor.”

Penn State did have its hands full with Stanford, which held the nation’s top hitting team to a season-low .177 hitting night ---just the fifth time all year they were held under .300. 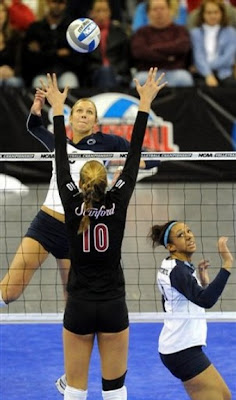 Another key statistic: The Nittany Lions ripped in five service aces to none from the West Coast power.

“I think the difference in the (second) game, if I remember after looking at it, was serving,” said Stanford coach John Dunning, whose team has lost three straight finals. “They had some aces and we had a couple errors. It’s a two-point difference.”

Penn State also won the digging battle 64-54, and got the ball to setter Alisha Glass in good spots so she could get people like Brown and Harmotto (8 kills, 6 blocks) involved to keep the Cardinal honest defensively.

“Our defense did a really nice job tonight,” said Alisha Glass, who gave out 40 assists. “We started out a little bit slow, but once we were getting touches on the block we were able to get digs and convert for points.”

“Penn State is a great team,” said Foluke Akinradewo, who posted eight kills and six blocks. “They have a really big block and a great defense behind it, so it is hard to get kills on them.”

Klineman led the Cardinal with 15 kills while Cynthia Barboza added 11 in a .023 hitting night thanks to 10 errors. Cassidy Lichtman handed out 36 assists, Gabi Ailes had 16 digs and Barboza posted 15.

Now, the pressure is finally off and the Nittany Lions can settle into their holiday break, and for the seniors the looming real world, reveling in what they have accomplished.

“It was worth it,” said Hodge, whose right shoulder was heavily encased in ice and hobbled around after the match like an elderly woman. “I’m not going to lie, Thursday was exhausting. If I never get put in that position again I’ll be a happy person but I really think it showed that our team is battle-tested and we can handle anything.” 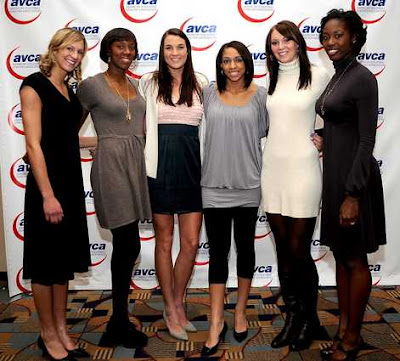 Six Penn State players were named All-Americans Friday in Omaha, the site of the 2008 NCAA Women's Volleyball Championships. They include (L to R) Christa Harmotto, Arielle Wilson, Blair Brown, Alisha Glass, Nicole Fawcett, and Megan Hodge. Senior Nicole Fawcett was also named the 2008 AVCA Division I Player of the Year. Russ Rose won his second straight AVCA Division 1 Coach of the Year award and Megan Hodge was selected as the tournament's Most Outstanding Player for the second year in a row.(For the CDT/Steve Manuel)
Posted by jtf at 1:35 AM