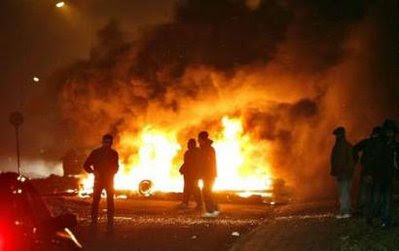 People stand near a burning barricades on the main road in the immigrant-dominated suburb of Rosengard in Malmo in southern Sweden December 18, 2008. REUTERS/Drago Prvulovic/Scanpix (SWEDEN)

John Hinderaker notes the return of youths of no other discernible characteristics in this BBC headline:

Let's take a wild guess here. Would the "Swedish city" happen to be "Malmo"? Why, amazingly, yes:

Dozens of youths have rioted in the southern Swedish city of Malmo for a second consecutive night, setting cars on fire and clashing with police.

While we're on a roll, would it happen to be the part of Malmo known as "Rosengard"? Why, right again!

People stand near a burning barricades on the main road in the immigrant-dominated suburb of Rosengard...

"Immigrant-dominated", eh? Is that a way of saying it's the most heavily Muslim neighborhood of Sweden's most Muslim city? Ah, well, let's not go that far. All the BBC is prepared to say is that the otherwise non-specific youths' riotous activities were "linked to the closure of an Islamic centre".

Down under, I got into a little spat with a rather dour lady leftie on Australian radio who disputed my characterization of Malmo, and in particular my claim that ambulances would no longer respond to emergency calls in certain youthful neighborhoods with a police escort. I offered to buy her lunch in Rosengard and show her the town so she could judge for herself, but she declined to take me up on the offer. Still, perhaps she'll reflect on this detail in a Reuters photo caption:

Police extinguish burning barricades on the main road in the immigrant-dominated suburb of Rosengard in Malmo in southern Sweden, early December 19, 2008. The fire department considered the area to be too risky to enter with their personnel.

In my "free speech" crusade up in Canada, I'm frequently lectured by lazy cliche-recyclers that there's no freedom to shout "Fire!" in a crowded theatre. But in a burning city feel free to shout "Nothing to see here!" for another decade or three.
12/21 08:18 AM
Posted by jtf at 9:48 AM