Further to Michael Portillo's bleak assessment that "Britain has lost the stomach for a fight", here's a reminder that the mangy old British lion still has some teeth: On Christmas Day 2007 in Afghanistan, the Royal Marines were in the middle of their al fresco carol service when the Taliban attacked and they found themselves having to return fire in their Santa hats. It's an episode in the storied tradition of slightly dotty imperial elan which courses through The Daily Telegraph's military obituaries. 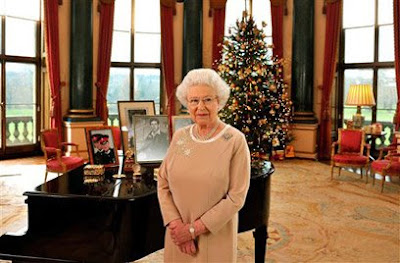 
One of the interesting questions since 9/11 has been whether prosperous but desiccated post-national states can in effect outsource the remnants of national will entirely to a professional military. Ever since King George V's first radio broadcasts to the Empire in the 1930s, it has been a tradition every December 25th for the Sovereign to deliver a Christmas message to the Commonwealth. These days, the Queen's thoughts are mostly the usual "celebrate diversity" multiculti pap, she having been well nobbled by her courtiers in this respect (her husband is another matter). Inevitably, even this PC boilerplate is felt to be "exclusive" and so in recent years Channel 4 has invited someone every Christmas Day to deliver an "alternative Christmas message". It's generally the familiar stillborn provocations to a no longer extant "mainstream" - a gay activist, a woman in a burqa, etc.

This year, it's the head of a state that issues bounties on British subjects and kidnaps British sailors:

President Mahmoud Ahmadinejad of Iran will give a message of seasonal goodwill on Christmas Day as an alternative to the Queen's traditional broadcast.