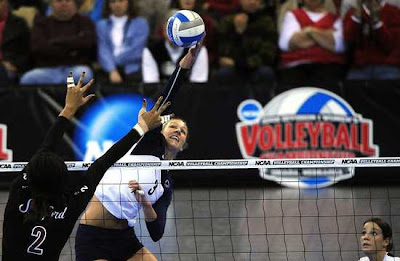 They will, in the end, put right the wrong.

If you are playing a match somewhere, just a friendly game with no officials watching over play, and no one is sure if the ball landed in or out, simply replay the point and the volleyball gods will decide.

If you get the point, the ball must have been in before. That is the rule.

The volleyball gods were watching over the Penn State women Saturday night.

If you watched the NCAA championship match against Stanford, won in a sweep by the Nittany Lions to clinch their third national title and second in as many years, you probably already know the scenario.

The score was 21-19 in the second set, and the funny thing was that everyone in the building knew the deal except for three people — the official scorer and the two referees. Even the head coaches, Penn State’s Russ Rose and Stanford’s John Dunning, knew the situation.

The referees had an excuse, since they usually do not know what the actual score is at any one time. It is not their job. ...

In case you do not remember, here is a brief recap: Penn State’s Blair Brown had just pounded down a spike to apparently put the Nittany Lions up 21-19, except the Qwest Center scoreboard read “20-20.” The down referee checked with the official scorer, then huddled with the coaches, then huddled with the up referee, then started the process over again as the entire building watched in disbelief as the national championship was being screwed up by someone not paying attention.

Also during he lengthy delay, Stanford’s Cynthia Barboza walked to the net and motioned to the Penn State players the debate should be decided by “rock-paper-scissors.”

Eventually, for some strange reason, the score was settled at 20-19 Penn State and play resumed. A few points later, the score took another inexplicable jump from 22-21 to 23-22 in the Nittany Lions’ favor. There was a brief discussion over this, and then play resumed again.

After this display, does Omaha still deserve to be getting premium consideration for hosting volleyball championships?

The NCAA showed off its infinite intelligence over the matter once again, just like it does over football, by not consulting with anyone who might be able to help. ESPN2, which was carrying the match live, had the score right (I know, I just watched the set again to check my scoring). Across the court, Nebraska’s scorekeepers, who were keeping the computer scoring and have a running play-by-play to easily clear up any discrepancies, had it right. Neither was asked for help.

Then, compounding the idiotic mess, after the match every member of the media was instructed not to ask about the situation, even in a hypothetical, because no one will be allowed to answer. Big Brother says so.

They also issued a brief explanation, which explained nothing:

“Error by scorekeeper, correction made by officials then when error was found on the scoresheet the adjustment was made on the scoreboard.”

The good news? Penn State still ended up winning the set and the match. In reality the final score of the set was 26-23, not 26-24 as the scoreboard showed, but that will soon fade from memory.

What should be remembered is the volleyball gods were watching over Omaha, making sure all was just and fair.

That is what they do, and that is why we trust them.

Some things go with the Nittany Lions even if they are not in Rec Hall. Just like she has done throughout the first four rounds of the tournament at home, when introduced before the semifinal and final matches, senior Nicole Fawcett ran behind each of her other teammates and slapped them all on their backsides. For the championship match, her slaps were extra hard.

It was a tradition starter last season by former player Kara Callahan.

“Kara did it last year and I thought it needed to still carry on,” Fawcett said. “That was, if anything, to keep everyone loose and having fun. I decided I had to do it.”

Another much longer-standing tradition also continued: When the team ran onto the floor to begin their pre-match warm-up routine for both matches, Fawcett and Christa Harmotto stood by the net and gave sophomore Cathy Quilico a lift up above the net to start jumping drills.

That tradition from pretty much every match in the past several years predates Harmotto and Fawcett. Tabitha Eshleman, whose last season was in 2004, was the first to be hoisted toward the sky. Since then a census is taken every preseason to find the smallest player, and at 5-foot-1 and maybe a feather over 100 pounds, Quilico more than fits the bill.

“I’m assuming I’ll be the smallest girl the next two years also,” Quilico said. “I’m glad I get to do that.”

Gordon Brunskill is a sports writer for the Centre Daily Times. He can be reached at 231-4608 or gbrunski@centredaily.com.
Posted by jtf at 8:07 AM