OMAHA, Neb. — So, was this one really the best volleyball team in NCAA history?

The debate raged all week in Omaha, and with the American Volleyball Coaches Convention in town along with the final four, there were plenty of experts on hand who could pass judgment. 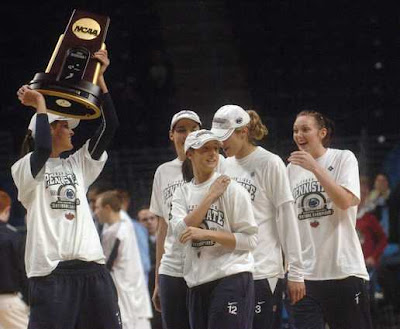 Members of the Lady Lion volleyball team, from left, Kelsey Ream, Blair Brown, Alyssa D'Errico, Christa Harmotto and Nicole Fawcett display the 2008 NCAA Division 1 Championship trophy while they are honored during a timeout during the Nittany Lions' basketball game against Lafayette on Sunday, Dec. 21, 2008

The coaches who were on the court for the national championship match, Penn State’s Russ Rose and Stanford’s John Dunning, were a little less opinionated Saturday night after the Nittany Lions’ three-set sweep at the Qwest Center, giving them back-to-back titles and three in the last 10 seasons.

Needless to say, they were getting pretty tired of hearing those questions and were finally happy to prove their worth with Saturday’s victory.

“Looking back now, it’s extremely hard,” said senior Nicole Fawcett, who had 10 kills in the final and was honored the night before as the AVCA national Player of the Year. “The amount of pressure — it was there but I don’t think we ever let that affect us. The pressure we put on ourselves was more important. We really demanded the best of each other and I think that’s why we got to where we are and became the team that we are right now.”

What was a major key to the team staying in contention all year, to set all those records and dominate the way they did? They stayed healthy.

Other than one weekend when libero Roberta Holehouse was absent due to a death in the family, and one weekend in which key defensive specialist Alyssa D’Errico was lost to a concussion, every key player was on the court for every single match.

That was in contrast to 2005, when Penn State looked to be a strong title contender but then-freshman middle hitter Christa Harmotto was lost to a torn ACL late in the regular season.

“I remember freshman year with Christa’s injury, then sophomore year half our team was injured,” Holehouse said. “It really helps us to play the top, the volleyball we want to play. Everyone’s healthy, everyone’s able to get off the ground quick, everyone can take big swings. It really does help us.”

What else got them to the glorious ending? Defense. It was not just blocking, even if they had 11.5 terminal rejections against Stanford, and a ton more that the Cardinal kept alive, but it was also the back-line people D’Errico and Holehouse.

“Even though the offense gets all the attention, there were a lot of people who had to improve their game,” said Rose, the AVCA Coach of the Year. “Roberta flew under the radar screen for most of the season and a good bit of her career. It’s going to be difficult to replace the things that she did.”

When you are leading the nation in hitting and blocking, digging numbers do tend to get overlooked. It may jump out that, statistically speaking, Penn State was awful in digging. The Nittany Lions were 11th — dead last — in the Big Ten in digs. Yet in their matches, they were only out-dug by an opponent once all year, and they had 14 more than Nebraska in the semifinals and 10 more than Stanford in the finals.

Why the disparity? When you are cranking up big hitting numbers and blocking numbers, the opponents are not sending too many balls to the back-row people.

“People tend to overlook the things we do because we have so many All-Americans on the floor that are big hitters,” Holehouse said. “The past two matches are an indication that we’re not just a big team, we’re an all-around team.”

That is how you end up with a national championship.

If you were at the match or watching on television, you may have noticed a couple of delays while Holehouse was tended to by the team trainer. She actually had to deal with three separate injuries Saturday.

She cut one of her fingers while opening a soup can Friday and the cut reopened Saturday night. She also scraped the back of her hand on the plastic sport court during the match.

Then there was the pre-match injury: While standing in the stadium tunnel before running onto the court, under a temporary awning, Holehouse was dancing in excited anticipation and was accidently pushed by a teammate into the metal frame of the awning, gashing her thigh.

Cleaning up some odds and ends from the now-completed season:

•Penn State finished with a .390 hitting percentage, breaking the NCAA rally-scoring record of .369 by Florida A&M in 2004. The Nittany Lions just missed the all-time record of .406 by Hofstra in 1983.

•Harmotto finished with a .433 career hitting percentage, which would have broken the old NCAA record of .423 by Virag Domokos of George Mason, except Stanford’s Foluke Akinradewo passed them both with a career mark of .447.

•Fawcett finished her career second on the school’s all-time kills list with 1,943, while Harmotto is 16th with 1,244. Harmotto also is fourth all-time in blocks with 682 and Holehouse is fifth in career digs with 1,306, passing current assistant coach Salima Rock-well on the list. Their impact will be missed by their teammates.

“I can’t talk about that yet,” said redshirt sophomore Blair Brown, one of the team’s six All-Americans. “I’m not ready for that. Not only are they incredible in the program, they’re some of my best friends. State College will be so different without them. They’re my neighbors, I live with them, It will be so different. They are Penn State volleyball.”

By the way, two-time NCAA Championship Most Outstanding Player Megan Hodge is fifth on the all-time Penn State kills list with 1,582.

•One NCAA record held by Penn State is about to be broken: Nebraska has won 87 straight home matches (in Lincoln, not including the Qwest Center where they lost for the first time Thursday). That ties the Nittany Lions’ streak set in the 1990s. Penn State could be poised to take back the record should the Cornhuskers ever lose, since they have won their last 57 at Rec Hall.

•For more on the scoring fiasco during the second set, pick up a copy of Tuesday’s CDT.
Posted by jtf at 8:02 AM