In Defense of Warren

Barney Frank is deeply offended by Rick Warren, and he wants to the world to know it. On CNN’s Late Edition yesterday, Representative Frank criticized President-elect Obama for inviting Warren to deliver the invocation at his inauguration. According to Frank,

Mr. Warren compared same-sex couples to incest. I found that deeply offensive and unfair. If [Obama] was inviting the Reverend Warren to participate in a forum and to make a speech, that would be a good thing. But being singled out to give the prayer at the inauguration is a high honor. It has traditionally been given as a mark of great respect. And, yes, I think it was wrong to single him out for this mark of respect. 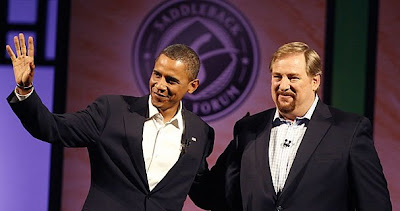 What has Frank and other gay rights advocates riled up is that Warren backed a California ballot initiative banning same-sex marriage (the measure was approved by voters last month). In the course of defending his stand, Warren has made the point that there are lots of arrangements one could envision consenting adults wanting–from polygamy to incest–that we would not want to label “marriage.” In making that comparison, gay rights advocates have decided to try to turn the Reverend Warren into a reviled figure. Let’s therefore try to examine the argument Warren is making.

The core of this case, which is articulated in William Bennett’s 2001 book The Broken Hearth: Reversing the Moral Collapse of the American Family (full disclosure: I assisted Bennett in writing the book), is that marriage is not an arbitrary social arrangement; it is, rather, based on teleology and the different, complementary nature of men and women. It is also an institution that cannot be understood apart from its cultural, biological, and religious underpinnings. It cannot be redefined by fiat.

Suppose, for example, that a man and three women, all adults, wanted to marry. They insist they love one another and that marriage would strengthen their bond. As consenting adults, they should be allowed to enter any arrangement they desire. Or assume that a man and his 22-year-old daughter decide that they, too, love one another and want to spend the rest of their lives together. They, too, insist that they love each other and that allowing them to marry would represent the best of America: tolerant, respectful of the desires of individuals, and part of the expansion of individual rights that we witnessed during the Civil Rights era. Now ask advocates of same-sex marriage to make an argument against these arrangements.

They will say that marriage isn’t about marrying as many people as you love; it’s about marrying one other person you love. It should therefore be restricted to two people. But why is this? Who are gay-rights advocates to insist that we limit the number of people in marriage to two? Polygamy, after all, has been much more prevalent in history than gay marriage, a movement that was essentially unheard of until a few years ago. But homosexuality is “morally and psychologically” superior to polygamy, others insist. And how do they know? As Charles Krauthammer has pointed out, many Americans believe heterosexuality to be “morally and psychologically” superior to homosexuality, which is why they deny the validity of homosexual marriage.

Same-sex marriage advocates, in dismissing the time-honored definition of marriage and de-linking it from its cultural, religious, and traditional understanding, have lost the ability to draw boundaries against a slew of other arrangements. Once people decide that their own human longings give them license to lay claim to marriage, the definition of the institution is arguably up for grabs. Everyone who wants to redefine marriage will invoke the arguments made by same-sex marriage advocates–from insisting that society should not set up roadblocks to their happiness and their desire to enter into loving, faithful relationships; to arguing that their lives would be incomplete without marriage; to claiming that government is wrong to deny them equal protection.

In the words of Mr. Bennett:

Having just rewritten the central rule of the marriage bond, proponents of same-sex marriage are hardly qualified to dictate to others what constitutes its central meaning, or why it can be felt only between two human beings, and not more than two. What arguments would they invoke? Tradition? Religion? The time-honored definition of the family? These are the very pillars they have already destroyed. No, once marriage has been detached from the natural, complementary teleology of the sexes, it becomes nothing more than what each of us makes of it.

That, I think, is what Rick Warren was getting at, rather than comparing homosexual behavior to incest. Now one may disagree with Warren’s position and believe that gay marriage is simply part of the centuries-long evolution of marriage that has occurred and that it would not harm, and may even marginally help, the institution of marriage. I disagree, but I understand such a case can be made–and, in fact, that case has been made by intelligent and sober advocates for same-sex marriage (like Jonathan Rauch). But to say that the arguments put forth by Warren are “deeply offensive and unfair” is itself, I think, unfair. And the effort to portray Warren as a bigoted and benighted figure is both unfair and wrong.

By all accounts, Rick Warren is a man of enormous integrity who oversees a wonderful, life-saving ministry. He also gives voice to the views of millions and millions of Americans–including presumably Barack Obama, who also opposes same-sex marriage–and Warren does so in a civil manner. Beyond defending the traditional view of heterosexual marriage, Warren has done several other things, including broadening the vision of evangelical social ethics to issues such as AIDS and helping the continent of Africa. He has also shown a generosity of spirit by having Obama speak at his church (and has been criticized from the right for doing so).

President-elect Obama deserves credit for asking Rick Warren to deliver the invocation at his inauguration. It is a symbolic gesture for sure–but symbolism matters, and this reciprocal generosity of spirit is good for the country. It is Barney Frank and his allies who are determined to turn the Obama inauguration into yet one more battlefield in America’s “culture war.”

The outrage directed at Warren is an effort by some to intimidate those who oppose same-sex marriage into silence and de-legitimize their arguments rather than answer them. This effort needs to be resisted, especially by those who claim to care so much about “tolerance” and the free and open exchange of ideas. It would be nice if, from time to time, those who claim to represent modern liberalism would reacquaint themselves with the classical version.