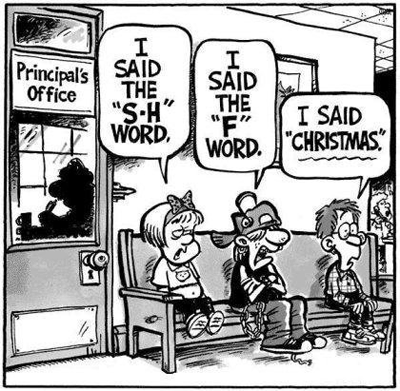 Those claiming to doubt the existence of the War against Christmas need only read the annual anti-Christmas rants of Christopher Hitchens, which are prominently featured at Slate. Indeed, this year Slate linked Hitchens’ column with the title "My War on Christmas" and accompanied it with an illustration of the dyspeptic Briton kicking Santa Claus.

Hitchens is open about his intention: "My own wish is more ambitious: to write an anti-Christmas column that becomes fiercer every year while remaining, in essence, the same." ['Tis the Season To Be Incredulous, December 15, 2008] And Hitchens’ open disdain for Christmas, and the religion that gave it birth, neither harms Hitchens with leftist editors nor with his many admirers in the "mainstream right." The brief biographical tagline at the end of Hitchens’ column identifies him both as a "columnist for Vanity Fair" and as "the Roger S. Mertz media fellow at the Hoover Institution." For most "mainstream conservatives", Hitchens’ full-throated support for the Iraq War is apparently enough to excuse his War against Christmas and against Christianity.

Hitchens’ complaint is that Christmas is "a moral and aesthetic nightmare," and that at Christmas "the United States . . . turns itself into the cultural and commercial equivalent of a one-party state," where "the image and the music of the Dear Leader are everywhere."

Leaving aside the fact that the public celebration of Christmas has diminished during Hitchens’ time in America (he's lived here since Reagan's first term) as a result of the War Against Christmas Hitchens’ comparison of Christ to Kim Jong Il is offensive, and the rest of his argument is simply stupid. [Watch Hitchens on YouTube reciting Tom Lehrer's parody, A Christmas Carol.]

If Hitchens is serious about wanting to avoid Christmas, maybe he should make his next home the birthplace of the "Dear Leader," North Korea.
Hitchens’ claim that Christmas represents a "moral and aesthetic nightmare" is equally obtuse; in fact, it is the inverse of the truth. Christianity is the moral basis of Western civilization, and Christmas especially is marked by countless acts of Christian charity, and numerous donations that help all manner of charities to continue their work throughout the year.

Does Hitchens really hate the Salvation Army bell ringers who enable that organization to do its exemplary and cost-efficient work? And the spirit of charity that characterizes Christmas has been embraced and even furthered by non-Christians. Charles Dickens was not an orthodox Christian, but in the English-speaking world Christmas inevitably brings to mind his great and justly loved tale of the moral redemption of Ebenezer Scrooge, a tale that has helped further the outpouring of generosity that continues to mark Christmas.

As Fred tells Scrooge at the beginning of Dickens’ novel, in words that have become familiar to most of us,

"I am sure I have always thought of Christmas time, when it has come round—apart from the veneration due to its sacred name and origin, if anything can be apart from that—as a good time: a kind, forgiving, charitable, pleasant time: the only time I know of, in the long calendar of the year, when men and women seem by one consent to open their shut up hearts freely, and to think of people below them as if they really were fellow passengers to the grave, and not another race of creatures bound on other journeys."

And far from being an "aesthetic nightmare," Christmas was instrumental in creating the Western artistic tradition. I noted in my article "How to Win the War Against Christmas" in the December issue of Chronicles that Christmas is a celebration of the birth of Christ and the mystery of the Incarnation. But it is also the celebration that most helped shape the West.
As Thomas Cahill explains in his Mysteries of the Middle Ages,

"Roman Christians found their attention drawn to the most down-to-earth aspect of the Trinitarian doctrine: the Infleshing, the Incarnation, the Making of the God-Man. What, they asked themselves, are the practical consequences—to human beings—of the Word becoming Flesh? From this question will flow, with some notable divagations, the main course of what was to become Western Christianity."

Although Roman Christians "agreed in principle" with their Greek coreligionists that Easter was the "supreme Christian feast," "in practice they came to prefer Christmas." And this preference for Christmas had profound consequences.

Cahill tells the story of how Saint Francis of Assisi created the first crèche at Midnight Mass in Greccio. In the words of Saint Bonaventure, Francis "made ready a manger, and bade hay, together with an ox and an ass, be brought unto the place."

Cahill focuses on why Francis did this: "I wish to make a memorial of that child who was born in Bethlehem and, as far as possible, behold with bodily eyes the hardships of his infant state, lying on hay in a manger with the ox and the ass standing by." By trying to recreate "as far as possible" what had happened in Bethlehem, Francis had, according to Cahill, asked a "wholly new question," a question that was "historical, emotional, particular, and human: what would it have been like to be there?"

This emphasis on realism, so different from the Christian iconography that characterized Eastern religious art, meant that "In the town of Greccio on Christmas night in 1223 were born the arts as we still know them."

A generation later, Giotto, "throughout his adult life a Franciscan tertiary," painted that scene in Greccio in fresco in the magnificent basilica built to commemorate Francis in Assisi, and the first Christmas is part of his equally famous frescoes in the Scrovegni Chapel in Padua. Giotto’s

"eucharistic Catholicism, informed by a Franciscan spirit, pushed him toward a nearly scientific quest to reproduce more exactingly in art the very things his eyes could see, his hands could touch, his heart could love—and preeminently among these lovable things was the human body itself."

And this realism, grounded in the incarnational theology of the Western Church, had a profound impact:

"[Giotto’s] work is done. His influence on generations to come, whether direct or indirect, on sculptors as well as painters, on Renaissance and modern artists as well as late-medieval ones—on Pisano, Ghiberti, Donatello, the Della Robbias, Fra Angelico, Masaccio, Piero della Francesca, and Mantegna, on the inevitable trio of Leonardo, Michelangelo, and Raphael, and perhaps especially on that most inspired supernaturalist Caravaggio—will be immeasurable. . . . And that is how life became art."

Thus, it is no exaggeration to state that the Western artistic tradition is inextricably linked to the celebration of Christmas.

We are reminded of this great tradition whenever we buy one of the Postal Service’s Christmas stamps, which each year feature a painting of the Madonna and Child by one of the masters of the Western artistic tradition. (This year, the stamp features a portion of Botticelli’s Virgin and Child with the Young John the Baptist, found in the Cleveland Museum of Art; sadly, the Museum described the stamp as a "holiday stamp" in its December Members Magazine, even though the Postal Service blazons "Christmas" on the stamp). [Contact the Cleveland Museum of Art]

To be sure, there are some tacky Christmas songs and displays, but only someone completely lacking in imagination will let those obscure the profound beauty that has always marked Christmas and that can still be found by those willing to look.

Almost everyone enjoys seeing Christmas trees and Christmas lights, and there is enough variety in the great treasury of Christmas music—from high art such as Handel’s Messiah and Bach’s Christmas Oratorio to great, heartfelt carols such as Silent Night, The First Noel, and Angels We Have Heard On High, to outstanding examples of American songwriting such as The Christmas Song and Have Yourself A Merry Little Christmas—to please almost every musical taste.

That Hitchens is incapable of enjoying any of this is sad enough. That he and the rest of those waging War Against Christmas want to prevent the rest of us from doing so is inexcusable.

Tom Piatak (email him) writes from Cleveland, Ohio.
Posted by jtf at 8:50 AM