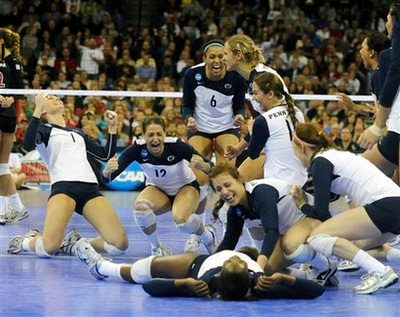 Stanford (31-4), playing in the championship match for a record 14th time, became the first team to lose in the final three years in a row.

Penn State spotted Stanford leads of 5-1, 13-8 and 16-12 before scoring 13 of the final 17 points of the first set, and the Nittany Lions never trailed in the second and third.

The second set was interrupted twice while officials straightened out a discrepancy between the official scorekeeper and referee.

The Nittany Lions won an NCAA-record 111 straight sets before Nebraska pushed them to five sets in Thursday's semifinals.

The previous four matches between Penn State and Stanford had gone five sets. But the Nittany Lions, with six All-Americans in the lineup, were able to sweep Stanford this time even though they didn't play their best. Penn State hit just .177 for the match; Stanford hit .142.

Hodge, a 6-foot-3 outside hitter, was the tournament's Most Outstanding Player. She took over in the third set, trading swings with Stanford's Alix Klineman in the late going and finishing the set with nine kills. 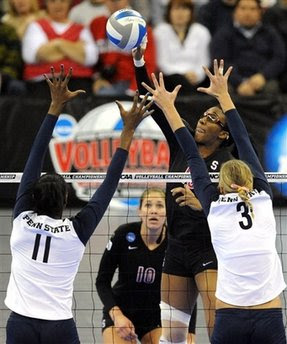 National player of the year Nicole Fawcett had 10 kills, but she hit just .029, and Blair Brown added nine for the Lions.

The national title is Penn State's third, with the other coming in 1999.

Penn State setter Alisha Glass joined Fawcett and Hodge on the all-tournament team. Klineman and Barboza were all-tourney picks for Stanford, as were Jordan Larson of Nebraska and Destinee Hooker of Texas.

I love this article! I found the story when released to be the biggest joke I had ever heard. I got a good laugh and moved on. Thanks for showing that I could laugh again at the story.