Mark Steyn: McCain can sure sound like a conservative 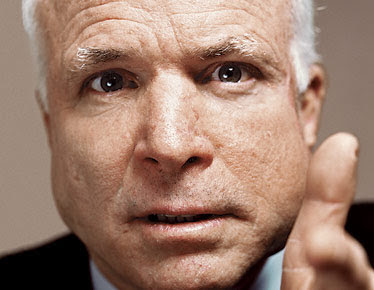 His tough talk distracts from his far-from-conservative stands on global warming, immigration and other issues.

It's looking like a grim pick of the daisy petals for conservatives: McCain. Clinton. Obama. He loves us not. She loves us not. He wants to waft us upward on a great uniting bipartisan marshmallow of "hope" and "change" so he can implement down-the-line by-the-book highly partisan hopeless unchanged liberal policies.

How did it get to this? I was on the radio with Laura Ingraham an hour or so before she introduced Mitt Romney's farewell appearance at CPAC, and she played Stevie Wonder's campaign song for Barack Obama, whose lyric runs:

It would be hard to believe you could come up with a Barack Obama campaign song thinner in content than a Barack Obama campaign speech, but Mr. Wonder has apparently accomplished it. So Laura and I had a laugh over Stevie's two-word lyric and moved on to discussing McCain and Romney and policies on this and that, at which point I observed that, on reflection, that Stevie Wonder song is actually quite a useful way to look at the campaigns. When a guy starts running for president, a few of us tend to hear the lyrics – what's he saying about the war, abortion, taxes. But a lot more people respond to the tune – howhe's saying it.

That was part of the problem with Mitt's campaign: When the sheet music came rolling off the fax machine from the Romney press office, it looked great. Good policies on the economy, national security, social issues – all three legs of the Republican coalition. But, when Mitt put the sheet up on the stand and started to sing, it wasn't quite what the broader GOP electorate wanted to hear.

Mitt is a smart, talented, successful man, but he has a clean-cut mien, and he says "Golly!" quite a lot. I found that goofily endearing. When someone raised the old polygamy question about Mormons, Mitt could have snidely pointed out that, in contrast with certain former New York mayors and Arizona senators, he was the only candidate still on his first wife, but instead he just took Mrs. R's hand and said "Golly, I hate polygamy." I don't know whether I'd want to be married to someone who said "Golly!" quite that often, but that's Mitt: not a polygamist, but a gollygamist.

A decisive chunk of the Republican primary electorate didn't find this goofily endearing. When Mitt stood up and warbled, they didn't like his tune. They wanted something meaner and rawer and tougher, and there was John McCain. At the risk of overextending my musical analogy way beyond its natural 32 bars, it should be noted that the defining McCain moment came back in the fall when he responded to Hillary Clinton's support for public funding for a Woodstock museum. If you're under 70 and have no idea what "Woodstock" is or why it would require its own museum, ask your grandpa. But McCain began by saying he was sure Mrs. Clinton was right and that it was a major "cultural and pharmaceutical event." Which is a cute line. And McCain wasn't done yet: "I wasn't there," he said of the 1969 music festival. "I was tied up at the time."

And the crowd roared its approval. It's not just a joke, though it's a pretty good one. It's not merely a way of reminding folks you've stood up to torture and you can shrug it off with almost 007-cool insouciance. But it also tells Republican voters that, when Sen. Clinton offers up some cobwebbed boomer piety, you know a piñata when you see one, and you're gonna clobber it.

And that's the music a lot of Republican voters want to hear. For a certain percentage of voters, McCain is tonally a conservative, and that trumps the fact that a lot of his policies are profoundly unconservative. He won New Hampshire because if you stuck him in plaid he'd be a passable Beltway impersonation of the crusty, cranky, ornery Granite Stater. The facts are secondary that, on campaign finance, illegal immigration, Big Pharma and global warming, the notorious "maverick's" mavericity (maverickiness? maverectomy?) always boils down to something indistinguishable from the Democrat position.

As it happens, on the Woodstock museum, McCain's absolutely right: If clapped-out boomer rock is no longer self-supporting and requires public subsidy, then capitalism is dead, and we might as well Sovietize the state. In a sense, it's the perfect reductioof geriatric hippie idealism: We've got to get back to the garden, but at taxpayer expense. A McCain presidency would offer many such moments. But, in between, he'd be "reaching across the aisle" to enact essentially Democrat legislation on climate change, illegal-immigration amnesty and almost everything else.

Charles Krauthammer calls McCain the "apostate sheriff," which is a nice term. He suggests that, for many Republican voters, "national security trumps social heresy." I'm not sure about that. This isn't shaping up to be a war election and, if it was, McCain would come under greater scrutiny. What's his big picture on radical Islam? We know, because he now claims all but sole credit for it, that he's pro-surge, and he was surging when surging wasn't cool, especially among jelly-spined Republican senators. But, as Mark Levin points out, the surge is a tactic, not a long-term strategy.

So, if Republicans went for McCain because he's the "national security sheriff," I think it's the sheriff part they like, rather than the national security. It's easy to see him moving down a dusty Main Street in a low crouch, hands ready to draw. Actually, now I do try to picture it, he's less like the sheriff and more like Yosemite Sam, and that doesn't usually work out as well.

Still, Republicans seem to have decided that McCain matches their mood. George W. Bush, you'll recall, was reviled by Dems and Europeans as a shoot-from-the-hip, dead-or-alive Texas swaggerer, but Republicans could never quite match the Dubya caricature with the guy who cooed all the religion-of-peace mush while strolling hand in hand with King Abdullah or announced homoerotically that he'd gazed into Putin's eyes and got a glimpse of his soul. It's hard to imagine McCain offering such effusions, yet at the same time, insofar as he has anything that could be regarded as a grounded political philosophy, it lies in the same "compassionate" direction as much of the Bush era.

Meanwhile, in this primary season, as the field has winnowed on the Republican side, the gap between GOP and Democrat "enthusiasm" has widened. John McCain is supposedly the man who'll bring "moderates" and "independents" and even "anti-Hillary Democrats" into the big tent. Look at the Super Duper Tuesday turnout figures. One reason why the tent feels big is because it's getting emptier.