England's Crisis is Ours Too 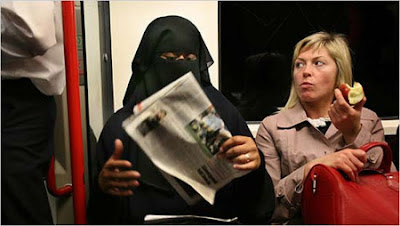 A young British Muslim woman who would only allow her last name, al-Shaikh, to be printed, wears a full-face veil. “It’s an act of faith,” she said. (Hazel Thompson for The New York Times)

The United Kingdom, from common language and shared heritage, offers us our best window into what is happening in Europe. This is especially so when we try to come to grips -- if we have the courage to do so -- with the historically sudden irruption, and rapid spread, of Islam across Europe.

There are parallel developments in all the nations on the Continent: high immigration rates from Islamic countries, comparatively high birth rates among that immigrant population, and the radicalization of their young in Wahabi mosques financed by the oil wealth of Arabia. But for many English-speaking Canadians, it is the British experience that brings the phenomenon home.

The demographic issue is at the centre of much controversy. There can be little dispute over the statistical facts, which are quite dramatic, and as exhilarating from an Islamist point of view, as they are ominous for those who fear the loss of everything associated with western civilization. For, owing to the prior triumph of the leftist "multicultural" ideology, which holds that one "culture" is as good as another, and therefore it is wrong to preserve our own way of life, there is considerable opposition to discussing these facts.

We have seen this in Canada, where journalists Mark Steyn and Ezra Levant have been hauled before "human rights tribunals" -- kangaroo courts in which defendants are stripped of all the traditional protections of court law, and where judgments may be passed against them by people with no legal qualifications on the basis of whim and hearsay.

In both cases, the journalists are being prosecuted by Muslims who advocate the imposition of Shariah law, but are using an apparatus that was designed by the Left for the persecution of those expressing right-wing views.

The British system works differently, and the media in Britain remain more robust than the media in Canada, and willing to report things that would be studiously ignored in a Canadian newsroom. On the other hand, by sheer force of numbers, and the intimidation value of several Islamist atrocities on London's streets, the "fear factor" in Britain is much higher, and the Labour government has proved much more responsive to Islamist demands.

The chief, and most consistent Islamist demand, is for the imposition of Shariah law, at least for Muslims, but ideally by the whole state. In fact, many Shariah courts are already operating informally in Britain, dealing mostly with routine civil questions of marriage, divorce, inheritance, and financial disputes, but sometimes with crime. For instance, a Shariah court in the London district of Woolwich was allowed recently -- apparently with the co-operation of police -- to pass judgment on unnamed Somali youths in a knifing incident. (The assailants were released in return for an apology to their victim.)

In various other ways, Shariah is being recognized, semi-formally. For instance, although bigamy remains nominally a crime in Britain, the Labour government has approved new social provisions by which extra welfare payments, council housing privileges, and tax benefits may be claimed by polygamous households, and the cash benefits to which the extra wives are now entitled may be paid directly into the account of their husband.

At a higher level, the (Anglican) Archbishop of Canterbury, Rowan Williams, publicly called this week for the recognition of "some form of" Shariah law for Muslims in Britain, and said it should be given equal status with parliamentary law. While Archbishop Williams has a long history of muddled pronouncements, and is widely observed to be emotionally unstable, the strength of his office is now engaged on the Islamist side.

Muslim groups such as the Ramadhan Foundation responded luke-warmly, welcoming the suggestion but criticizing the archbishop for having failed to punish his Bishop of Rochester, Michael Nazir-Ali, who is under police protection after recently suggesting that various Muslim districts in Britain had become "no-go areas" for people who are not Muslim. (The Anglican Archbishop of York is also under fire, for making remarks critical of radical Islam.)

The saddest part of this, is that so many "moderate" Muslims emigrated to Britain (as to Canada) expressly to escape from societies in which Shariah law is normative. And what they are learning now, is that, thanks to the triumph of multiculturalism in the West, "you can run but you can't hide."

otiosus@sympatico.ca
Copyright 2008, Ottawa Citizen
Posted by jtf at 6:12 AM