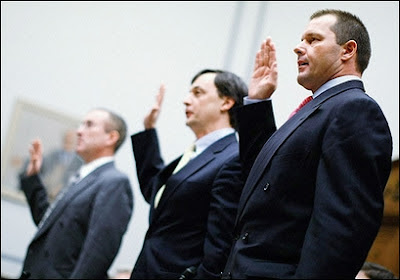 Major League Baseball pitcher Roger Clemens (R), Charlie Scheeler, investigator on former Sen. George Mitchell's staff (C) and former Major League Baseball strength and conditioning coach Brian McNamee (L) raise their right hands as they are sworn in to testify about allegations of steroid use by professional ball players before the US House Oversight and Government Reform Committee on Capitol Hill in Washington, DC. Clemens, fighting to preserve his All-Star reputation, came under intense and skeptical grilling from lawmakers at a congressional hearing Wednesday, as he stoutly denied doping allegations.
(AFP/Getty Images/Mark Wilson)

One day soon, as Roger Clemens stands before a federal judge, accused of perjury, he'll ask himself why he was so blind. So stubborn. So incredibly dense, believing he could charm his way through Congress with the same denials of steroid use. The greatest pitcher of our time is now the game's greatest liar, walking straight toward indictment. After 4½ hours of hearings Wednesday, this much is clear about the Rocket: His worst days are ahead of him.

The irony is, it's not accuser Brian McNamee who will ultimately take Clemens down. It's Andy Pettitte, whose sworn testimony last week all but ensured the Justice Department's involvement. Pettitte says Clemens talked to him about HGH and steroids in 2002 and again in 2004, an assertion so damning the best Clemens could do was say his buddy had "misremembered" their conversation.

No discerning American buys that one. But Clemens is in so deep, he's decided to run the table. That means smearing McNamee, denying they ever spoke about performance-enhancing drugs and even pretending he was unaware that his wife, Debbie, was using HGH. The Rocket does so despite the enormous risk of prosecution and, perhaps, jail time. In fact, an hour before he was supposed to appear before the House Oversight and Government Reform Committee, Clemens was cautioned against testifying by Rep. Tom Davis, the committee's senior ranking member.

Davis reminded Clemens that he was under no obligation to appear. He didn't have to answer any questions. There was no penalty for invoking his Fifth Amendment rights, or even skipping out altogether. But Clemens declined to use the escape hatch. To him, this is a challenge no different than the ones he's faced from 60 feet 6 inches. It's all the same war to the man who's made a living out of bullying opponents. Clemens intends to beat Congress the same way he once dealt with Mike Piazza, with a high, hard one and a follow-up stare that says, "Do something about it."

But there were plenty of telltale signs of Clemens' inner panic. He licked his lips constantly, stammered through half-answers, talked around the charges he couldn't defend. Clemens said he never knew former Sen. George Mitchell's investigators wanted to talk to him, blaming his agents for the lapse. Further questions revealed that Clemens may have tampered with a witness - a former nanny who was ready to tell investigators that Clemens was lying about missing a Blue Jays team party at Jose Canseco's house, where a discussion of steroids allegedly took place.

Clemens made sure to speak to the nanny before putting the committee in touch with her. If that wasn't illegal, it surely was improper, yet the Rocket had the audacity to say he was doing Congress "a favor" by making her available. It's that sense of entitlement that has ruined Clemens: His family, friends, lawyers and sycophants have convinced him that baseball - no, America - owes him for years of greatness on the mound. We are in Clemens' debt for his charity work, for his trip to the Gulf visiting the troops, even his willingness to represent the U.S. in the World Cup.

Who are you going to believe, me or a slime-4.000>ball like McNamee, is the foundation of Clemens' defense. Only, it's not that simple anymore. Forget that McNamee's testimony has been corroborated by two of the three people he named as steroid and HGH users. He said Chuck Knoblauch used. Correct, says Knoblauch. He said Pettitte used. That story checked out, too, according to Pettitte, who revealed he was cheating not only in 2002 but 2004 as well.

So why would McNamee tell the truth about two former Yankees, but lie about Clemens?

Better question: Why would Pettitte, whom everyone in the room called an honest man, say Clemens was cheating?

Clemens had no answer for that, forced to fall back on his theory that his buddy had "misremembered" their conversation in 2006, after they'd been named in a leaked story in the Los Angeles Times. Pettitte, in a state of panic, asked Clemens what they were going to do now that the dam had burst. Cold and calculating, the Rocket pretended he didn't know what Pettitte was talking about, insisting their conversation had been about Debbie Clemens.

Pettitte didn't challenge the Rocket any further. He realized the great man he'd admired, if not idolized, had sealed himself up in a lie, one that he refuses to surrender. What a pity. What a waste. All Clemens had to do was tell the truth - just say he broke the rules, tried juicing, regretted it, and advised anyone who was considering steroids to run the other way.

Americans would've forgiven Clemens in an eye blink. Congress would've had no further interest in him. Using steroids, after all, is hardly the kind of crime the government will bother prosecuting. But it's the lying - the pathological, bold-faced, unyielding lie - that will send you to jail. And therein lies Chapter Two of this dark saga. Sooner or later, this case will be heard in a courtroom, not on Capitol Hill. And Pettitte won't be able to get away with a statement behind closed doors.

He'll have to take the witness stand and tell the world what he told the committee, that Clemens is a liar. Don't think that scenario hasn't already played out a million times in Pettitte's head. He asked the Yankees on Wednesday for a five-day reprieve before reporting to spring training. The pressure, he said, had turned into a tidal wave. Brian Cashman granted Pettitte's wish, telling reporters, "I was in no position to refuse."

The Yankees' general manager, no dummy, was staring at the obvious: For Clemens and Pettitte, the worst is yet to come.

E-mail: klapisch@northjersey.com
Posted by jtf at 7:58 AM