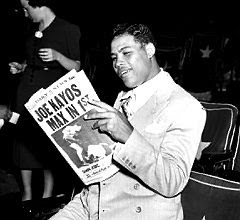 For years when I was growing up, I thought Joe Louis was a part of my family. That's because my great-grandmother had strategically placed an 8-by-10, black-and-white photo of a young Louis in our family photo album.

As a kid I would flip through the photos and there between pictures of my great-grandfather in his World War I doughboy uniform and the various aunts and uncles in their Sunday finest was the strapping Louis in a boxing pose.

I would ask my great-grandmother how we were related to Louis and she would just say, "That's Joe Louis," in the most reverential tone. That Louis photo held the same prominence in our photo album as the pictures of Martin Luther King Jr. and JFK on the walls of most African-American homes in the '60s and '70s.

I was reminded of that "family" photo after viewing "Joe Louis, America's Hero - Betrayed," the fine HBO "Sports of the 20th Century" documentary, which airs Feb.23 at 8 p.m. as the prelim for the Wladimir Klitschko-Sultan Ibragimov heavyweight unification fight at Madison Square Garden.

The 75-minute documentary shows the full scope of Louis' significance to American history and society and the horrible manner in which the IRS hounded Louis for back taxes. It is one of the best pieces of work by the sports documentary duo of Ross Greenburg and Rick Bernstein at HBO.

Joe Louis Barrow Jr., Louis' son and one of the most important voices in the documentary, said he and Greenburg talked about making the film 15 years ago. He was pleased with the way that it came out.

"I've never been to any place in the world where people didn't have respect for my father," Barrow said.

The film follows Louis from the time he migrates to Detroit from Alabama with his family as a child to his death in 1981. In between is an insightful look at Louis' rise through the heavyweight division, his memorable matches against Max Schmeling, Billy Conn and Rocky Marciano, and his sad ending as a hotel greeter at Caesar's Palace in Las Vegas.

Barrow said his father never complained about his plight or even the fact that the IRS mercilessly hounded him for back taxes. The film details how Louis donated money to Army and Navy charities and did countless exhibitions while enlisted in the Army for four years during World War II. The feds even went so far as to take the $64,000 trust funds that Louis had set aside for his two children.

"It was an inappropriate way to treat anyone, let alone someone who had done so much for society," Barrow said.

Louis came along at a bleak time for African-American heavyweights who wanted to be world champion. He broke a more than 20-year blackout that was based on the behavior of Jack Johnson, which was considered inappropriate for a black man at that time. The flamboyant Johnson dated white women and flaunted his superiority in the ring by taunting his white opponents after he knocked them out. Newspapers at the time actually said another black champion would lead to race riots and general social unrest.

In his pursuit of the heavyweight championship, Louis was given rules by his handlers that forbade him from being photographed alone with white women and never to raise his arms in victory after he won a fight. The humble, strong, silent role actually fit Louis' personality, so it was nothing he fought against, according to Barrow.

Barrow said his father made America come to grips with segregation. But as a new African-American athlete came to the fore during the civil rights movement, Louis seemed out of step. There is a clip of Muhammad Ali in the film calling Louis "an Uncle Tom for white people."

"At my father's funeral Muhammad Ali came over to me and whispered in my ear that my father was really The Greatest," Barrow said. "I think that was his mea culpa for what he said."

A mea culpa never came from the government, though Ronald Reagan cleared the way for Louis to be buried in Arlington Cemetery with full military honors.

The HBO documentary evokes all the emotions that I'm sure my great-grandmother had when she considered the full measure of Joe Louis in our family album. I didn't fully understand it until I saw the film.
Posted by jtf at 9:45 AM